I have a SQLite database with a hierarchical role-based access control (RBAC) data model.

In this model, users are granted permissions to perform certain actions against various resources either directly or by being a member of one or more roles to which the permissions are assigned. Additionally roles can be assigned to other roles such that a hierarchy of roles can be defined. 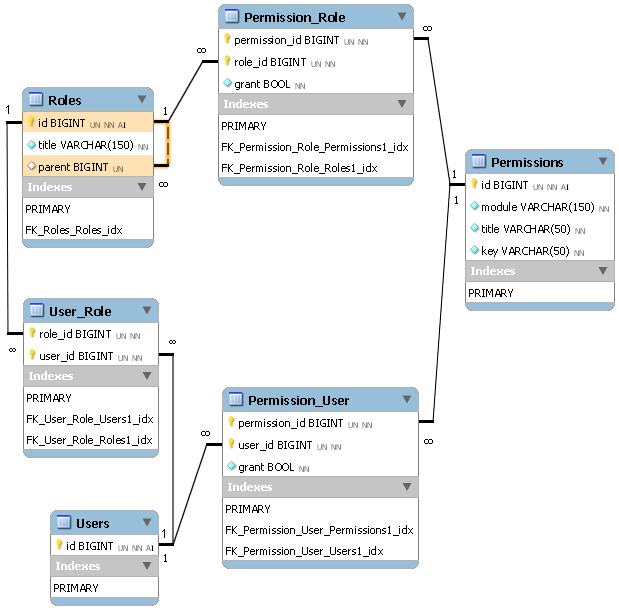 With the exception that there is a Role_Role join table instead of a "parent" column on the Roles table, similar to the below: 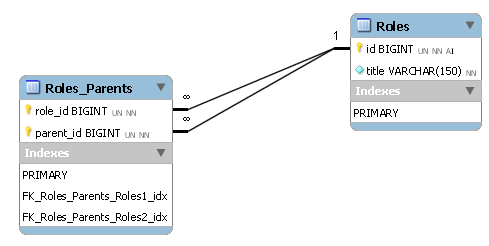 Also there is no "grant" column on the join tables; existence of a record in a join table means it is granted.

What would a query to get all of the permissions for a given user look like? I'm assuming using a recursive CTE would be involved, but I'm not sure.

Edit: I've got the following recursive CTE working for getting the roles inherited by other roles:

Not sure if this is the only CTE I'll need but it's a start.

Here's what I came up with -- thanks to @CL. for the tips. I made it into a view so I can just query against that for a particular user.

I found I had to keep the depth check otherwise the loop would never exit if there was a cycle in the role inheritance chain.

If anyone has any suggestions on how this could be improved, please let me know!

Not the answer you're looking for? Browse other questions tagged sqlite cte role hierarchy access-control or ask your own question.

29
oracle - list users with access to certain tables
5
What must be in place to validate a XMLTYPE against a schema?
2
Postgres inherit from one role and not another
9
Hierarchical permissions in a table stored hierarchy
0
MariaDB Roles and SHOW DATABASES
3
Can I trust the effective permissions of default database roles?
4
PostgreSQL structure for options that permit overriding and precedence
0
MySQL 8 roles - I'm probably missing something obvious