I wanted to try out the contained database users feature on Azure SQL Database V12, but I'm having a problem authenticating that seems odd to me.

I created a database called Classifier. I added my IP to the firewall rules so I could connect to the Azure db server from SSMS on my workstation. Once I was able to get connected via SSMS for administration, I tried adding a user with a password to the database, like this:

I also added this user to the data writer and reader roles:

After this, I'm able to connect to the database with these credentials from SSMS: 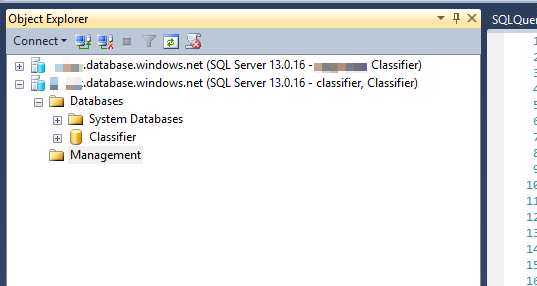 But this is where things go awry: I've tried several different connection string incantations and can't seem to get connected in a web app I'm working on. It didn't work in the Azure environment, so I'm running on localhost with a connection string to the Azure database, and it just won't connect. Here's the connection string I'm using at the moment:

I enabled auditing in the Azure db server hoping to get some details as to why it's failing, but all I get is this:

And this is where I'm stuck. Most of what I've been able to find by way of documentation or blogs indicate that the thing to do is look at SQL Server logs to see what the real error state is which would indicate more narrowly the nature of the failure, but since I'm dealing with Azure there's no way to do that (as far as I know).

What could cause the application to fail where SSMS (and LinqPad and Visual Studio Server Explorer, incidentally) succeeds?

We found that with contained databases / contained users you must specify:

Otherwise CONNECT seems to be revoked by default. Once we made the above change, we could access the database.

When switching our API to connect to an Azure database via a new contained user, we had to change our connection string to include:

While I don't understand why this change was required, I wanted to post here in case it helps someone else out in the future.

We originally came to try this from this question.

My problem was different, but related: I was trying to connect to a Azure SQL database by using SQL Server Management Studio (SSMS) with a contained user. I was getting a "Login failed for user" message in SSMS.

Solution: in the SSMS connection options for the query window I had set the "Connect to Database" to the name of the database to which I was trying to connect.

Explanation: In hindsight the reason was obvious: contained users are allowed only to connect to the database(s) in which they were created.

Eg. I ran into this with Scaffold-DbContext command

The cause in my case was that we're using an older version of ASP.NET Identity. When you're new'ing up the IdentityDbContext, it checks for some database objects for a version check. It does this by opening a second SQL connection using the first connection's ConnectionString:

If Persist Security Info is false (as mentioned by another answer), that this check fails (since it now tries to open a 2nd connection without providing a password).

An additional flag can be passed to the IdentityDbConte

Not the answer you're looking for? Browse other questions tagged authentication connections azure-sql-database or ask your own question.