designing a database with type and sub type

I am trying to build a publications database, and i want to develop a genre relation that has various (maybe look up tables) sub-genres attached. as an example, in the genre relation there would be a row for 'POETRY' but somehow i want to divide that into sub genres like 'PROSE', 'HAIKU' or 'FREE_VERSE'.

what is the best way to design such a thing? would i have a separate look-up table for each row in the genre relation for the various sub-genres? that doesn't seem very flexible. any input would be greatly appreciated.

This seems nearly identical to the following question, and my answer there should be detailed enough to explain the concept (and is just too much to copy and paste here).

For your case specifically I would think it should work itself out to be something along the lines of:

In light of additional details being made available that give context to the scope of the request (specifically the following comment on the question:

the data files ... are all in fact printed, no audio of image/video files. ... one sub-genre is sufficient, and ... it is possible to have just a genre without any sub sections..

), it seems clear now that the flexibility allowed for by my suggestion above is not needed as sub-types aren't really being stored. Instead, the request now seems to be for simply a means of categorization. For that, if you want a rigid structure of Genre / Sub-Genre such that:

then you can do something along the lines of:

In this model you know that what is in the Publication table is always the SubGenre, and it always has a parent Genre. You did say that it is possible to not have a SubGenre (though is that really the case?), you can use the same Name for both SubGenre and Genre (e.g. News -> News instead of Poetry -> Bad Teenage).

Or, if you want a dynamic structure of Genre / Sub-Genre such that:

then you can do something along the lines of:

Please note that the ParentPublicationTypeID field is NULLable, which indicates a top-level item when it is NULL. This is the model that Walter Mitty suggested.

Perhaps you'll find the "Nested Set Model" for suitable for genres. Some advantages to this are:

Here's an article that explains it: http://mikehillyer.com/articles/managing-hierarchical-data-in-mysql/ 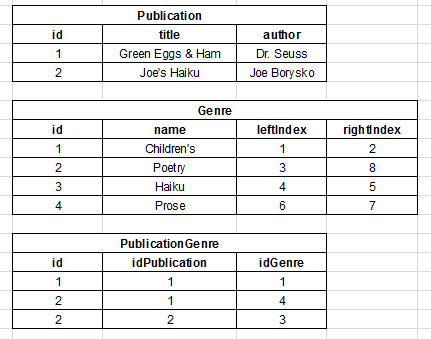 What the "Nested Set Model" would look like for this sample data:

A solution like class-table-inheritance is probably overkill in this case. It sounds like you need the same data, in the same fields, for sub genres and genres. This can all be stored in one lookup table, the PublicationType table.

You need one more field in this table, to record the relationship between sub-genres and genres. I'll call this field ParentPublicationTypeId. The entry in the Haiku row would contain the PublicationTypeId for Poetry. This references a different row in the same table, but it's just another case of a foreign key. The buzzword is "reflexive relationships" if you want to find further reading.

9
Don't know how to transform variable entity into relational table
4
Implementing User Privacy Settings with MySQL Database
4
Abstract classes in SQL Server. Are they even possible?