I have a legacy PostgreSQL database source (ODBC) that I'm attempting to migrate to new SQL Server schema using SSIS. I'm getting a warning saying:

'Row by Row' fetch method is enforced because the table has LOB column(s). Column content is LOB

The thing is, none of the column really need to be LOBs. There's a few that are TEXT types, but could fit easily within a varchar(max). Even stranger, though, most already are varchars, but it seems anything over varchar(128) is being treated as if it was a LOB (in advance properties, the data type is DT_NTEXT).

I event tried doing a manual SQL command where I explicitly casted every string type to a varchar of an appropriate length in the select statement, and they're still being set as DT_NTEXT in the ODBC source.

I'm not a DBA, so it's entirely possible I'm doing something really stupid. I would just like to know the best way to ensure that the types end up as varchars so I can batch fetch. Any ideas?

I used Data Conversion for the varchar larger than 128 as NTEXT but what removed the error for me eventually is the set Validate External Data to False.

Apparently this just boils down to SSIS treating any varchar larger than 128 as NTEXT. Not sure why. I can, however, go into the advanced properties of the ODBC source and change the types back to something like DT_WSTR. Which seems to work for the most part.

However, I did determine that a few of the tables I'm dealing with actually are carrying upwards of 4000 bytes in some of the their TEXT columns, so I unfortunately have to leave those colums as DT_NTEXT to prevent truncation (SSIS won't let you set a DT_WSTR type with more than 4000 bytes). I suppose in these instances, I'm just stuck with row-by-row fetch, but at least I was able to fix a few tables.

This solution worked for me : 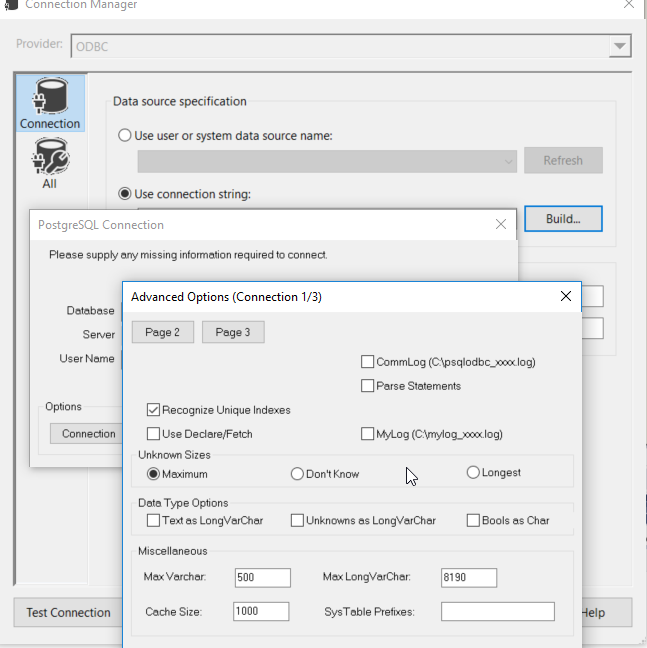 In my case the source is Filemaker ODBC which also treats long text as LOB datatype. My package used to hang for a long time due to the extreme decrease in performance for Row by Row fetch method is enforced because the table has LOB column(s). Thus, while being deployed it used to timeout after a long time and fail eventually.

I am sharing the actual solution that worked like a charm for me. One day worth over 30k LOB type data pull took approx 10 minutes for me::

Lower the DefaultBufferMaxRows down to 1 and increase DefaultBufferSize to maximum i.e. 100 MB. Then change the source ODBC DSN by checking the option 'treat text as long varchar'. And map the datatypes as is from source to target (without any change in advanced editor in source).

Not the answer you're looking for? Browse other questions tagged sql-server postgresql ssis odbc migration or ask your own question.

3
SSIS SQL Server 2008 errors
5
Silent truncation of last character when using SSIS with Oracle
7
Turning on TF610 in SSIS
22
Why would you index text_pattern_ops on a text column?
2
SSIS ODBC: Mapping result set columns to variables returns error “Value does not fall within expected range”