I'm running into a problem where multiple MySQL updates being performed at the same time will lock up and takes several minutes to finish. I'm using InnoDB, so I'm confused as to why this could be happening since each update is updating only 1 row. I'm also using a m2.4xlarge RDS instance (the largest they come). 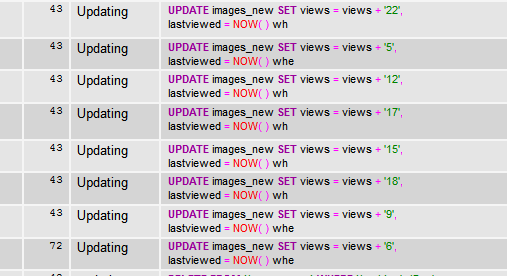 Here's what I'm doing: I have a table with about 100M rows in it, with "views" being a column (which is indexed), and I want to update the views on about 1M rows. On several different servers I have a loop like this where each server has it's own set of rows to be updated (pseudo code):

This loops through all the rows that need to be updated. It works perfectly when the number of servers is small, like around 4, but when it grows to 10+ the updates start to hang in the "Updating" state all at once. Nothing says that it's waiting on a lock, it's just "Updating". This happens for about 5 minutes, where it will finally make the updates and continue through the loop and eventually happen again.

I'm not looking for alternative ways to do the updates. Having things like a tmp table and

lock all the rows that are being updated until they all finish (which could be hours), which won't work for me. They MUST be in these awful loops.

I'm wondering why they could be getting stuck in the "Updating" state, and what I can do to prevent it.

tldr; Having 10+ "update" loops will eventually lock up all the updates being done, at the same time, for an unknown reason until they decide to finally make updates and continue through the loops, only for it to happen again seconds later.

I'm not looking for alternative ways to do the updates. Having things like a tmp table [will] lock all the rows that are being updated until they all finish (which could be hours), which won't work for me. They MUST be in these awful loops.

The strength of an RDBMS is in performing set operations like "update all these rows plz". Given this, your intuition should tell you that these "awful loops" are not the best way to go except under very rare circumstances.

Let's take a look at your current update logic and understand what it's doing.

First off, the set autocommit=0 line in your script is unnecessary. Because you explicitly open a transaction immediately after that with start transaction, autocommit automatically becomes disabled until you end the transaction with COMMIT or ROLLBACK.

Now for the meat of the logic: You've wrapped all these individual updates inside the loop in one big transaction. If your intention behind the iterative updates was to reduce locking and increase concurrency, the wrapped transaction defeats that intention. MySQL must maintain locks on every row it updates until the transaction commits so it can roll them all back at once if the transaction fails or is cancelled. Furthermore, instead of knowing in advance that it is about to lock this range of rows (which would enable MySQL to issue locks with the appropriate granularity) the engine is forced to issue a large number of row-level locks in rapid-fire. Given that you are updating 1 million rows, this is a massive burden on the engine.

There is always the imminent threat of deadlocking, even with InnoDB. In this particular case, I can see rows even in InnoDB running headfirst into deadlock situations because you are updating data via the PRIMARY KEY of the views tables. This will initate aggreesive locking within the clustered index.

You can see this locked using SHOW ENGINE INNODB STATUS\G

SELECT/UPDATE queries can perform locks on the gen_clust_index, aka the Clustered Index when updating via the PRIMARY KEY.

Here are three DBA Stack Exchanges questions I aggressively looked over with @RedBlueThing, the person who asked these questions. @RedBlueThing found work arounds for his questions.

In all three of these questions, a row lock involved a corresponding lock in the clustered index of the same table. Neighboring keys of locked rows were involved and thus contributed to the issues.

Make sure to use autocommit=1 when heavily updating a table in this manner. Even still, updating a row in InnoDB will cause all sorts of MVCC data to be shrouded around the previous contents of the row to allow concurrent transactions. Given the nature of the UPDATE, there will a lot of MVCC data being generated.

Looking at your innodb status I see the latest deadlock w/ the views table is also due to this query:

Is reddit_new.date indexed? Are the hash columns from both tables indexed?

Not the answer you're looking for? Browse other questions tagged mysql innodb concurrency or ask your own question.

38
Methods of speeding up a huge DELETE FROM <table> with no clauses
16
Reasons for occasionally slow queries?
12
Will these two queries result in a deadlock if executed in sequence?
17
Trouble deciphering a deadlock in an innodb status log