Is this acceptable practice for a many to many?

As a newbie in database design, I have a question about many-to-many relationship practice.

This question is actually a follow up question of this question, but I found it too big to explain in a comment.

But,...
I find myself in the same situation when it comes to e-mail addresses. So, my idea was to also link them to that same contact table. Was this a good step, or should I have added a separate table for the relationship between club - email and person - email?

I hope my question is a bit clear considering its actually a follow up.

-edit-
My schema seems to be incorrect for what my intentions are.

I notice that your specifications have turned a bit intricate (intentionally, right?), and I consider that this is a beneficial fact since this kind of scenarios will help you broaden your perspective on relational design.

Regarding such situation, I am going to suggest you two similar methods to deal with these new conditions. In the first one I propose the use of a (super)type-subtype cluster, and in the second one I recommend two one-to-many relationships. This way you would be addressing the relationships that you specify between the entities Person (or Club) and TelephoneNumber, and between Person (or Club) and EmailAddress.

My understanding of your business rules

I will describe my suggestions within the context of your individual questions but, before I do that, you first need to know the way I understand your scenario, and I understand it as follows:

Proposed methods and answers to your individual questions

I find myself in the same situation when it comes to e-mail addresses. So, my idea was to also link them to that same contact table. Was this a good step, or should i have added a separate table for the relationship between club - email and person - e mail?

Yes, adding a separate table is a good step and, to me, the best method, but it needs some refinements. Here is where my first suggestion comes into play, you should make use of two supertype-subtype clusters.

In the first case, I would include a table called Party (which has been mentioned in my other answer). This table will serve the purpose of relating a particular Club or Person (the Party subtypes) with a given ContactMeans, Telephone or Email.

See Figure 1, which shows an IDEF1X data model depicting a logical structure for this method. 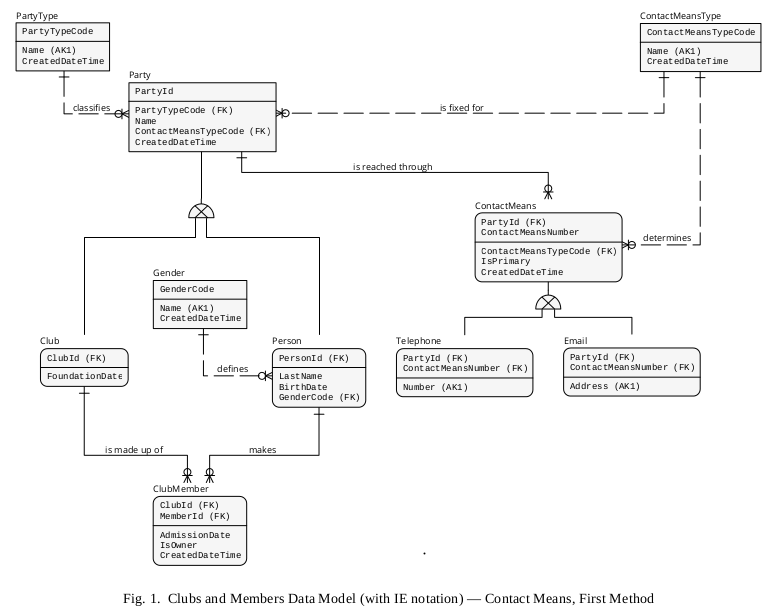 * Do not overlooke the vast power that relational keys have to offer, since they are being used to shape most of your business rules.

In this sense, e.g., it is worth noting how the PRIMARY KEY called PartyId has migrated from Party to ContactMeans, and then from ContactMeans to Telephone or Email. Said PRIMARY KEY has also migrated from Party to Club or Person (receiving the rolenames ClubId and PersonId, respectively), and then to ClubMember (PersonId being rolenamed as MemberId). Thereby, all this “chain” of tables is provided with referential integrity.

In this external document in .PDF format I give a more detailed treatment to this method.

As i understand it, this isn't exactly a many to many relation but a many to one.

Yes, as per the business rules that you have presented, this situation could be handled through a many-to-one (or one-to-many) relationship.

And yes, one given Telephone can belong to a Person or a Club. But no, I do not recommend the addition to the Telephone table of the two FOREIGN KEYS that make reference to Person and Club, nor I advise you leaving them NULL because, according to my personal experience, this may be a sign that the modeling stage needs to be extended.

Instead of the above, I propose a second method in which, again, you would be using the supertype table called Party. This table will “link” Club or Person with Telephone or Email.

As you can see in Figure 2, in this option Telephone and Email are structured with a many-to-one relationship with Party, and then, through the latter, to Club or Person.

I included the column denominated IsPrimary to Telephone and Email, which should be of use to store the fact that an individual Telephone (or Email) has been established as the main instance (of its corresponding type) for contacting a particular Party. Regarding this aspect you must create a method to ensure that there could be only one instance set as primary.

Then, you need to define a procedure to validate that any particular instance of a Party (Club or Person) can only be reached through (or contacted via) the ContactMeans (Telephone or Email) that has being fixed for such instance. The column Party.ContactMeansCode is useful in achieving this goal. For example:

See an IDEF1X data model illustrating a logical structure for this procedure in Figure 2. 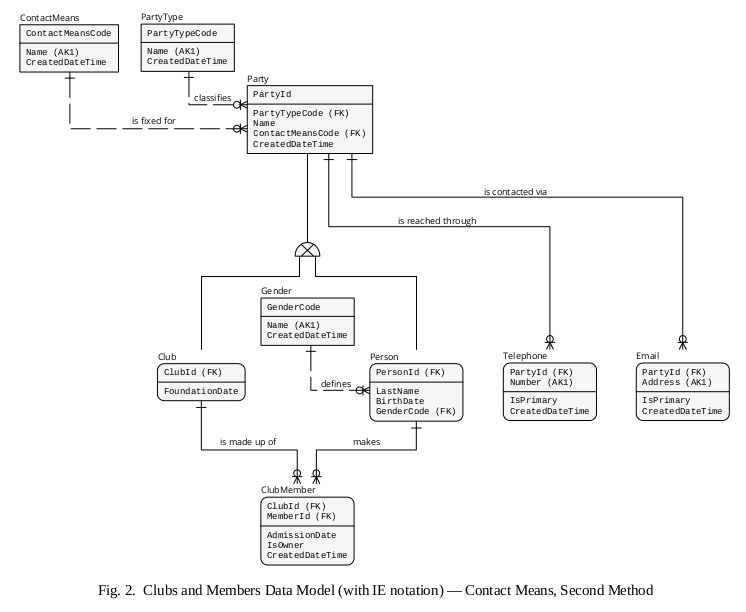 In the same external document in .PDF format I give a more detailed treatment to this second method, as well.

Not the answer you're looking for? Browse other questions tagged database-design subtypes many-to-many or ask your own question.

5
Storing Phone Numbers - Proper design
6
Database design - People and Organisations
2
Contact system database design
1
Best relationship database design to manage types for different entities
5
Table Relationship - One to Few (Many)
1
Data Modeling constraint issue
1
How can I represent a relationship of cardinality many to many?
0
Designing a database structure for a permissions system