Is this a sane model for a network provisioning system?

I'm sketching out a model for a network setup, where I have the following conditions: 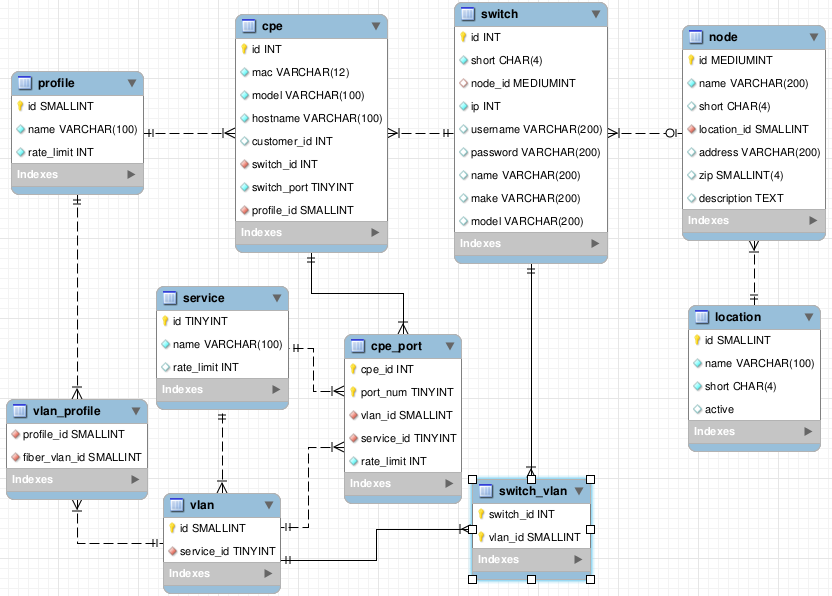 Please let me know if you need any additional information. Almost 3am here, so I might have forgotten something.

Update: Fixed the list, and updated the model to reflect the changes I've highlighted in my first comment. Also noticed a missing FK relation, between cpe and cpe_port`, which I've added.

Understanding of the specifications and proposed data model

We have mantained very productive interactions via comments, I have read your question carefully and examinined your diagram closely, so I have prepared the following assertions that I consider relevant in order to describe my current understanding of your scenario and, therefore, share my personal approach to such:

From such collection of assertions, I have derived (and uploaded as a .PDF document to Dropbox) the following…

Note: It is necessary to point out that some of these assertions (or parts of specific ones) have been identified as inaccurate or erroneous, as mentioned below in the section entitled Subsequent conclusions.

As you can see in said IDEF1X data model, I consider that CPEService is the “core” entity, so to speak, since this is where I think that the relationships between CPEs and Services, Switches or VLANs take effect.

I have used natural PRIMARY KEYS as much as has been possible, in order to capture the meaning of every prime attribute and make it more evident not only in its original entities, but also when it migrates to related ones. If you feel comfortable with my proposed model, it will be more easy for you to determine the stability of each one of such KEYS, and decide if you keep them or replace them with different ones, since you are, of course, involved in the actual context where the database is going to be used.

By virtue of comparing our models, discussing the important subjects and clarifiying the pending points via comments, we have have been able to confirm most of the things that you have already defined in your model:

This Network Provisioning Data model (also uploaded as a .PDF document to Dropbox), which is based on yours and also on the series of deliberations that we have kept over the last weeks, depicts these conclusions.

I have included the Party[1] entity in the data model since I think that it can be very useful to provide a means to represent both Organizations and Persons as a single entity, while also keeping their particular attributes in two corresponding separate entities. This scenario is an occurrence of what is commonly referred as supertype-subtype cluster (an exclusive one, in this case) in which Party has been defined as the subertype, and Organization and Person as its subtypes. You may find this answer of help as an introductory resource about this kind of structures.

Thus, your following comment provides a good oportunity for describing its usage:

I quite like the Party table, though I don't think MySQL supports a compound FK in a single column? I'll, most likely, use a single table for both types of customers. Might also use two child tables, to contain the different info for each type of customer. With a 1-0 relation to the customer table.

These are very relevant points that you have brought to the discussion since, in accordance to the structure depicted in the new data model, it is not necessary to use a compound FOREIGN KEY in a single column, because Organization.OrganizationId and Person.PersonId are PRIMARY KEYS that, at the same time, serve as FOREIGN KEYS that draw their values from a corresponding row contained in Party.PartyId. This is an example of what Dr. E. F. Codd defined as Primary Keys on a Common Domain[2].

This way, as you have already skillfully determined, you can use a single table for storing the data pertaining to the role played by a particular Party (Organization or Person) as a Customer, so I have included the latter entity in the model. For instance, suppose that the MaximumOverdue for customers will be arrranged on an individual basis, so this datum should be stored in the Customer table. It is also worth mentioning that the Customer.CustomerId PRIMARY KEY column expresses the role name assingned to Party.PartyId in this specific entity and, as such, CustomerId always takes its values from the last-mentioned column.

The follwing are some important aspects that must be taken into account when implementing exclusive supertype-subtypes relationships:

In order to cover these aspects in your database, I would highly recommend you inserting every supertype-subtype relationship instance inside a transaction.

1. A party is a person or group of persons (or people) that compose a single entity in a legal sense, so this term is useful to represent either an Organization or a Person in this particular business domain.

3. Since a party has only two possible subtypes, you can remove the PartyType entity and the subsequent Party.PartyTypeCode column, and then handle the Party subtype discriminator by means of a BIT column, which you could possibly denote as IsOrganization or IsPerson.

Not the answer you're looking for? Browse other questions tagged database-design network or ask your own question.

6
Network design considerations for Oracle Database Appliance
2
Application with “configurable” columns : how to model this
1
What is proper database design for a drupal table with an order field?
0
How do I draw the erd to model this scenario?
2
Database Design for a Graph (Network Topology)