Would appreciate some suggestions on how I should model this data

I am setting up a website that will have users. Users can search for songs and (if signed in) save them to a playlist or their library of songs.

Right now I am using Mongodb, doing something like such:

So what I have is a user, library, playlist, and song model.

Essentially I am trying to model something like iTunes.

Not sure of the best way to model this.

NOTE to people with itchy downvote fingers: I know that OP has asked about MongoDB and the answer that follows is RDBMS. However, if you check out the comments you'll see that I did ask why MongoDB and OP's answer is a presumption of necessity due to performance. Since nobody has come forth with a Mongo-centric answer in four days, I am going to offer my suggestion, which is to let RDBMS do what it's good at.

Raladical, as I noted in my comments to your question, I think that what you are trying to build is perfectly suited to the relational data model. Here is a quick data model sketch: 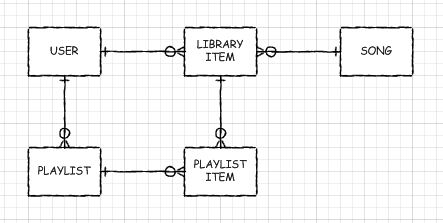 This model makes the following assumptions:

You can also easily extend this model to normalize for things like ARTIST and possibly even location, if that makes sense in your application.

This model is normalized (3NF) and if you index it properly it will be very performant. If you really want MongoDB or if there is something else about your system that is well suited to non-relational then you can definitely do it that way. If not, you should think about RDBMS for this one.

0
How should I model this data?
2
How to make a table with fields that are other tables in MySQL?
7
How do I model data from arbitrary CSV's in a database?
2
Storing a music playlist, best approach?
1
Database Design help
2
Multiple Many-to-Many Relations
2
Database Design - 'Lists' storage
0
SQL Database, how to set up users saving favorite songs