I'm using PostgreSQL with Sequelize as my ORM.

I have one type, User. The second type is Group, which can have any number of users associated with it through a GroupMemberships table. Users can also own any number of Groups.

My third type, Playlist, can belong to either a User OR a group. What would be the best way to design a schema for this type so that it can have either one type of owner or the either?

My first pass I created both associations, but only populated one at a time. This could possibly work, but seems hacky and makes queries difficult.

Here are my responses to the clarification requests posted by MDCCL via comments:

(1) If a Playlist is owned by a given Group, one can say that this Playlist is related to one-to-many Users, as long as they are Members of such Group, right?

I believe this is technically true, but this one-to-many association does not exist explicitly.

(2) So, is it possible for a specific Playlist to be owned by one-to-many Groups at the same time?

No, it should not be possible for a Playlist to be owned by one-to-many Groups.

(3) Is it possible for a particular Playlist to be owned by one-to-many Groups and, at the same time, by one-to-many Users who are not Members of such Group?

No, because as in (2) a one-to-many from Playlist to Group should not exist. Additionally, if a Playlist is owned by a Group it is not owned by a User, and vice versa. Only one owner at a time.

(4) What are the properties used to uniquely identify a Group, a User and a Playlist?

They each have a surrogate primary key (id), as well as a natural key (though not primary). These are slug for Group and Playlist, and username for User.

(5) Could a particular Playlist suffer an Owner change?

Although I don't plan on this being a feature (at least initially), I suppose this could hypothetically occur.

(6) What’s the meaning of the Group.Slug and Playlist.Slug attributes? Are their values stable enough to be defined as primary keys or do they change very often? The values of these two properties, along with User.Username must be unique, correct?

If I understand your specifications properly, your scenario involves —among other significant aspects— a supertype-subtype structure.

I will exemplify below how to (1) model it at the conceptual level of abstraction and subsequently (2) represent it in a logical-level DDL design.

The following conceptual formulations are among the most important rules in your business context:

As the associations or relationships (a) between User and Playlist and (b) between Group and Playlist are quite alike, this fact reveals that User and Group are mutually exclusive entity subtypes of Party1, which is in turn their entity supertype —supertype-subtype clusters are classic data structures that come about in conceptual schemas of very diverse sorts—. In this manner, two new rules can be asserted:

And four of the previous rules must be reformulated as only three:

The IDEF1X2 diagram shown in Figure 1 consolidates all of the aforementioned business rules along with other ones that appear pertinent: 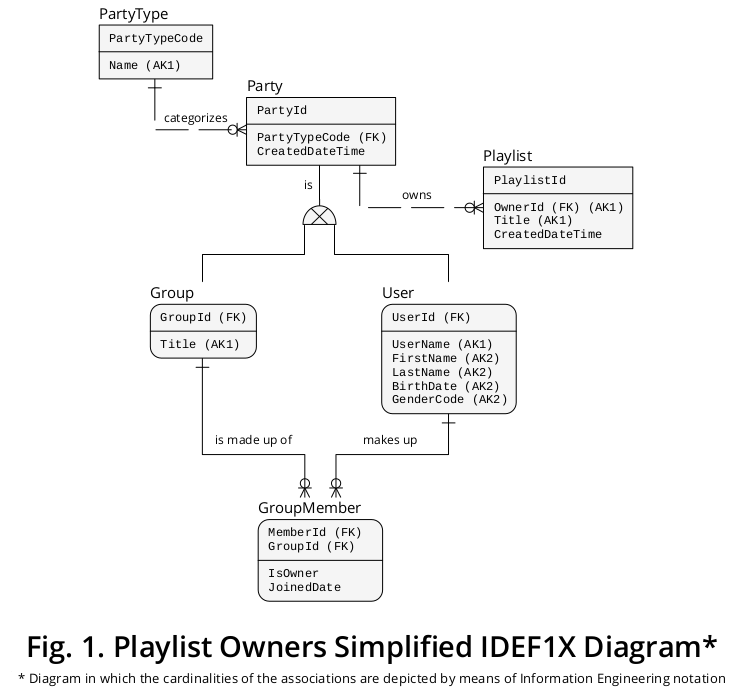 As demonstrated, Group and User are portrayed as subtypes that are connected by the respective lines and the exclusive symbol with Party, the supertype.

The Party.PartyTypeCode property stands for the subtype discriminator, i.e., it indicates which kind of subtype instance must supplement a given supertype occurrence.

Also, Party is connected with Playlist via the OwnerId property which is depicted as a FOREIGN KEY that points to Party.PartyId. In this way, Party interrelates (a) Playlist with (b) Group and (c) User.

Accordingly, since a particular Party instance is either a Group or a User, a specific Playlist can be linked with at most one subtype occurrence.

The IDEF1X diagram expounded before has served me as a platform to create the following logical SQL-DDL arrangement (and I have supplied notes as comments highlighting several points of particular relevance —e.g., the constraint declarations—):

Of course, you can make one or more adjustments so that all the characteristics of your business context are represented with the needed precision in the actual database.

Note: I have tested the above logical layout on this db<>fiddle and also on this SQL Fiddle, both “running” on PostgreSQL 9.6, so that you can see them “in action”.

As you can see, I did not include Group.Slug nor Playlist.Slug as columns in the DDL declarations. This is so because, in agreement with your following explanation

one can conclude that their values are derivable (i.e., they must be computed or calculated in terms of the corresponding Group.Title and Playlist.Title values, sometimes in conjunction with —I assume, some kind of system-generated— INTEGERs), so I would not declare said columns in any of the base tables as they would introduce update irregularities.

In contrast, I would produce the Slugs

In this manner, any of those two methods would avoid the “update synchronization” mechanism that ought to be put in place iff the Slugs are retained in columns of base tables.

It is critical to mention that (i) each Party row must be complemented at all times by (ii) the respective counterpart in exactly one of the tables standing for the subtypes, which (iii) must “comply with” the value contained in the Party.PartyTypeCode column —denoting the discriminator—.

It would be quite advantageous to enforce that kind of situation in a declarative manner, but none of the major SQL database management systems (including Postgres) has supplied the necessary instruments to proceed like that; therefore, writing procedural code within ACID TRANSACTIONS is so far the best option to guarantee that the circumstances previously described are always met in your database. Other possibility would be resorting to TRIGGERS, but they are prone to make things untidy, so to speak.

If you want to establish some analogies, you might be interested in taking a look at my answers to the (newer) questions entitled

since comparable scenarios are discussed.

1 Party is a term used in legal contexts when referring to either an individual or a group of individuals that compose a single entity, so this denomination is suitable to represent the concepts of User and Group with respect to the business environment in question.

2 Integration Definition for Information Modeling (IDEF1X) is a highly recommendable data modeling technique that was established as a standard in December 1993 by the United States National Institute of Standards and Technology (NIST). It is solidly based on (a) some of the early theoretical works authored by the sole originator of the relational model, i.e., Dr. E. F. Codd; on (b) the entity-relationship view, developed by Dr. P. P. Chen; and also on (c) the Logical Database Design Technique, created by Robert G. Brown.

1
Database pattern with two types of owners for an object. Like how users and groups can make posts in FB
13
Modeling a scenario in which each Music Artist is either a Group or a Solo Performer
15
How to model an entity type that can have different sets of attributes?
8
Database design - People and Organisations
9
Developing a database for a funds transfers business where (a) people and organizations can (b) send and receive money
6
Designing a database structure for companies and stock owners
2
Reviewing the design of a database about animals of two distinct species
3
Confused about what to use to create the data
2
Design for a child to have a single parent `A` OR `B` with FK cascade constraint?
1
Modelling an entity-relationship diagram for a scenario involving companies, services, and clients
See more linked questions

4
Would appreciate some suggestions on how I should model this data
2
Multiple Database Design or NOT?
0
is this database structure correct?
15
How to model an entity type that can have different sets of attributes?
4
Database Design Review - How to model a business domain about posting groups?
4
Table design for “Users & Groups” plus “Groups within Groups”
6
How to model the relationships (a) between properties and owners and (b) between properties and tenants?
14
Modelling a database structure for multiple user types and their contact information
2
Designing a multi-tenant database for a scenario with multiple user types
1
Should a column referencing a group member have its foreign key directly point to the user or add an id to M2M table which represents users in a group