I am having the following sql server error, while creating tempDB files. Any ideas?

The connection is broken and recovery is not possible. The client driver attempted to recover the connection one or more times and all attempts failed. Increase the value of ConnectRetryCount to increase the number of recovery attempts. (Microsoft SQL Server, Error: 0)

This is an old thread but this was the first hit on Google so I'm going to add my experience here. I was using SQL Server 2014 Enterprise while remote connected to the server.

I was attempting to restore a database from backup WITH REPLACE and RESTORE WITH NORECOVERY. Between the backup and my first transaction log I received the error indicated above. No databases on the server were able to be accessed; all received the same message. I was, however, able to access the other databases by connecting through a local instance of SSMS and it indicated that my intended target database was (Restoring...), as expected.

Turns out, all I had to do on the server instance of SSMS was restart SSMS. All was normal after that.

This has been sorted out.

what it was is that while changing the tempDB file locations I put them in the T: drive and the sql server accounts did not have permissions there.

After I have copied all permissions from the sql server data folder to the T: drive it all worked fine.

to copy all the folder permissions from D:\data to T:\tempdb using Powershell (run as administrator): 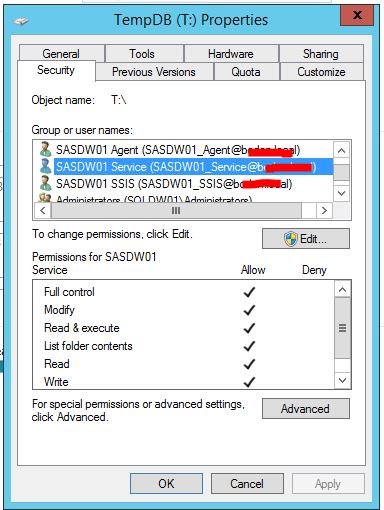 Not the answer you're looking for? Browse other questions tagged sql-server sql-server-2014 permissions connectivity tempdb or ask your own question.

1
how to script out all the permissions in a folder using powershell?