Why is DistinctSort followed by TopNSort in my query plan?

I have the following definition:

and the following query:

I run this query and inspect the actual execution plan and here's what's going on:

TopNSort and DistinctSort take something like 32 percent each so I'd be happy to get rid of DistinctSort - I don't even understand its purpose.

What's this magical TopNSort which useful DistinctSort and why is it there?

I can reproduce the plan that you describe on SQL Server 2012 (on prem) by running the DDL in your question and then fiddling the stats so SQL Server thinks that the table is much larger than reality.

And then running the query with OPTION (MAXDOP 1, CONCAT UNION, ORDER GROUP).

This is an index union plan. The concatenation operator implements UNION ALL. The Distinct Sort changes the semantics to a UNION operation to prevent the same row being returned multiple times. (In the event the table had no index key to act as a unique row identifier the physical rid would have been used here to avoid incorrectly de-duping different rows that happen to have the same column values)

An example of where this might be needed is in the query below. (note the two parameters are set to the same value so an index union plan there would seek the same rows twice)

The Top N Sort then re-sorts the data to implement the TOP 1.

In your case the Distinct Sort is logically not required for multiple reasons. The ItemState = 5 and ItemState = 11 branches are mutually exclusive (and this could be determined at compile time) and additionally the TOP 1 ... ORDER BY ItemPriority ASC, ItemCreationTime ASC semantics wouldn't be affected even if there were erroneous duplicates. 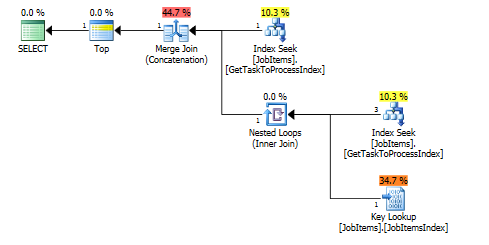 You could consider adding ItemRefreshTime as an included column to the index to avoid the key lookup if in practice quite a few may be required before finding a single row satisfying the residual predicate.

Not the answer you're looking for? Browse other questions tagged sql-server execution-plan azure-sql-database sorting or ask your own question.

2
Why does PK constraint require a separate index when I already have a suitable unique clustered index?
1
Access to Server and Real Data for Performance Tuning

21
Parent-Child Tree Hierarchical ORDER
4
Why does my query end up with two seeks instead of one and how do I fix that?
2
deteriorating stored procedure running times
1
Why query plan changes by number of rows
0
Why does Sql Server makes this bad query plan choice?
2
Reasons why batch generates more than one query plan?
11
Strange query plan when using OR in JOIN clause - Constant scan for every row in table
0
Speeding up "duplicate" checks
1
Reason for failed query plan executions in SQL Server