Can someone help me understand this user's answer for a CustomerLocation table. I really want a good method for storing addresses in the orders table.

What I'm looking for is how I can set up my addresses so when I edit them, the order is not effected by the fact that a customer updates his address or relocates.

As it stands my schema looks similar to:

Conceptually speaking, although in your business environment Order and Address are ideas that are closely associated, they are in effect two separate entity types, each with its own set of applicable properties (or attributes) and constraints.

Therefore, as previously stated in comments, I agree with @Erik, and you should organize the logical layout of your database declaring among other elements:

as I will exemplify below.

A picture is worth a thousand words, so I created the IDEF1X diagram shown in Figure 1 to illustrate some of the possibilities opened by my suggestion: 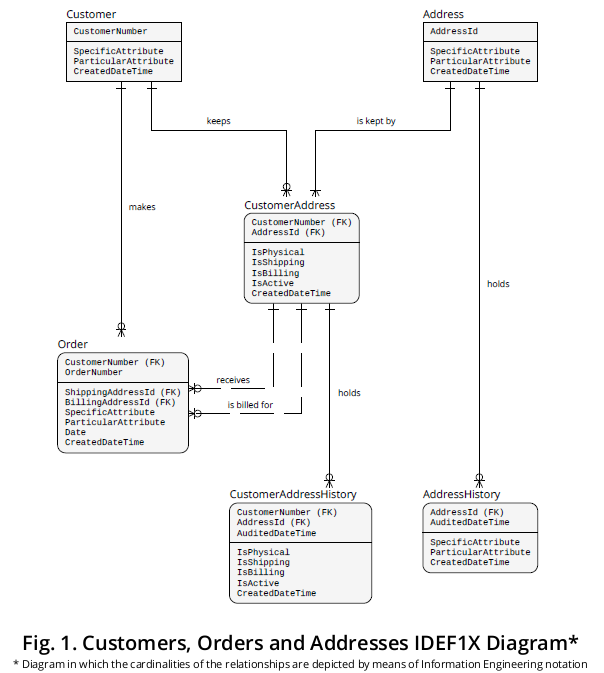 Customer, Address and their associations

As demonstrated, I portrayed an association with a many-to-many (M:N) cardinality ratio between the entity types Customera and Address; this approach would provide future flexibility because, as you know, a Customer can keep multiple Addresses over time, or even simultaneously, and the same Address can be shared by multiple Customers.

A particular Address can be used in several ways by one-to-many (1:M) Customers; e.g., it can be defined as Physical, and/or it can be set for Shipping, and/or for Billing. Perhaps, the same Address instance can serve each of the aforementioned purposes at the same time, or it may be covering two uses while a different Address occurrence covers the remaining one.

a In some business environments, a Customer can be either a Person or an Organization (situation that would imply a slightly distinct arrangement, as detailed in this answer about a supertype-subtype structure) but with the objective of providing a simplified example, I decided not to include that possibility here. In case you need to cover that situation in your database, the post of the previous link shows the method to solve said requirement.

Commonly, an Order requires only two kinds of Addresses, one for Shipping and one for Billing . In this way, the same Address instance could fill both Roles for an individual Order, but each Role is pictured by the respective property, i.e., ShippingAddressId or BillingAddressId.

Order is connected with Address via the CustomerAddress associative entity type with the aid of two multi-property FOREIGN KEYs, i.e.,

both pointing to the CustomerAddress multi-property PRIMARY KEY shown as

… which helps to represent a business rule that stipulates that (a) an Order instance must be linked exclusively with (b) Address occurrences previously associated with the specific Customer who made that Order, and never with (c) a random non-Customer-related Address.

History for (1) Address and for (2) the CustomerAddress association

If you want to supply the possibility of modifying Address pieces of information, then you have to keep track of all the data changes. In this manner I depicted Address as an “auditable” entity type that maintains its own AddressHistory.

Since the nature of a connection between a Customer and an Address can also suffer one or more modifications, I have as well depicted the possiblity of handling such an association as an “auditable” one by virtue of the CustomerAddressHistory entity type.

In this respect, various factors dealt with in Q & A no. 1 and Q & A no. 2, —both about enabling temporal capabilities in a database— are really relevant.

Consequently, in terms of the diagram displayed and explained above, I declared the following logical-level arrangement (which you can adapt to meet your needs with exactitude):

If you want to take a look, I tested it in this db<>fiddle that runs on SQL Server 2017.

The following excerpt from your question is very important:

What I'm looking for is how I can set up my addresses so when I edit them, the order is not affected by the fact that a customer updates his address or relocates.

The AddressHistory and CustomerAddressHistory tables aid in ensuring that an Order is not affected by Address changes, as all the “previous” rows should be retained in the respective History table and may be queried when necessary. UPDATE and DELETE operations on these two tables should be forbidden (trying to change history can even have negative legal implications).

The Interval encompassed between the values enclosed in AddressHistory.CreatedDateTime and AddressHistory.AuditedDateTime stands for the entire Period during which a certain “past” Address row was deemed “present”, “current” or “effective”. Similar considerations apply to the CustomerAddressHistory rows.

The CustomerAddress.IsActive BIT (boolean) column is meant to point out whether a certain Address row is “usable” by a Customer row or not; e.g., if it is set to ‘false’ it would convey the fact that a Customer is not using that Address anymore and hence it cannot be used for new Orders.

Note: On the other hand, I have seen some systems in which every time that a new Order is effectuated the Address information has to be entered (some times repeatedly), and the Address(es) used for past Orders are never erased (hence the Orders are not affected by Address changes).

This course of action can decidedly involve substantial volumes of redundancy, but it is a possibility that —depending on the exact informational requirements of your business domain— could work, so you might like to evaluate its pros and cons as well.

The “present”, “current” or “effective” version of an Address occurrence must be contained as a row in the Address table, but SELECTing the previous “states” of an Address FROM the AddressHistory (or from CustomerAddressHistory) table is easy, and it may be an interesting exercise to enhance your SQL coding skills.

With respect to one of the situations that you mentioned in comments, if you want to retrieve the “second to last version” of an individual Address row FROM its AddressHistory, you have to take into account the MAX(AddressHistory.AuditedDateTime) and the AddressHistory.AddressId that matches the particular Address.AddressId value at hand.

In this regard —at least when building a relational database—, it is quite convenient to first define the corresponding conceptual schema (based on the applicable business rules) and after that declare its subsequent logical DDL arrangement. Once you obtain stable and reliable versions of these fundamental elements (which, of course, can evolve over time), it is time to analyze and determine the best ways to manipulate (via INSERT, UPDATE, DELETE and SELECT operations or combinations thereof) the concerning data.

Evidently, at the external level of abstraction, Address information is perceived (by end-users) as being part of an Order, and there is nothing wrong with that, but that does not mean that the modelers have to design the significant parts of the database in question like that. On this point, if there is the need to, e.g., print a “full” Order (very feasible), you can “reproduce” it on-demand with the help of a few JOIN operators and WHERE clauses (considering the concerning validity period, etc.) maybe fixed in views for future consumption, sending the pertinent result set to the related application program(s) that, in turn, can enhance its formatting as necessary.

Of course, the application program(s) will be very helpful too when an Order is being effectuated; e.g., a desktop/mobile app window or a web page can:

facilitating in this manner all the involved processes at the GUI (i.e., the external level of abstraction of a computerized system).

You requested (in now removed comments) some pointers about sound database literature; therefore, as for theoretical material, I highly advise that you read all the work written by Dr. E. F. Codd, a Turing Award recipient and, of course, the sole originator of the relational model of data (maybe now more relevant than ever). This list includes some of his tremendously influential articles and papers.

Two important works that are not comprised in the aforesaid list are, precisely, his ACM Turing Award Lecture entitled Relational Database: A Practical Foundation for Productivity, from 1981, and his book denominated The Relational Model for Database Management: Version 2, which was published in 1990.

On the conceptual design front, Integrated Definition for Information Modeling (IDEF1X) is a seriously recommendable technique that was defined as a standard in December 1993 by the U.S. National Institute of Standards and Technology (NIST).

This answer was compiled from comments to the question.

One solution would be to use a FK to the address table in the order table. That will let you see the addresses that were used for the order, and decouples the address from the User's current address.

In order to make this work you would have to insert a new address and link that new address to the User table. This means that addresses are write once and the edit is an illusion to the end user. You can effectively store the history of all addresses a user was associated with by moving the association from the User table to an association table with a time stamp. That would give you a history of edits/addresses, and maintain immutable data in the Address table.

[you should] organize your database structure having one table for retaining Order related data, and another table for keeping the Address info. And, yes, you can definitely have a table representing many-to-many relationship between these two entity types. If a User can change his Address(es) attributes, then you have to keep track of such modifications, thus you should enable the corresponding AddressHistory. This post is related to the latter aspect.

MDCCL also gave an overview on how to find the current address for a user here:

In order to grab the latest version of a History table you have, you have to take into account the MAX(AuditedDateTime) of the corresponding AddressId. The first step is modeling/designing your best possible conceptual and logical arrangements, the second step is finding the proper ways to INSERT, UPDATE, DELETE and SELECT your data.

15
Implementing versioning system with MySQL
5
Storing personal data on an invoice to preserve data integrity
6
Storing a Shipping Address Best Practice
7
Developing a database for a funds transfers business where (a) people and organizations can (b) send and receive money
4
Storing created/retired dates for a large amount of different entities
2
Storing Address Data Model
0
How to maintain customer addresses for Orders?

6
Database design - People and Organisations
0
understanding (and modelling) grocery shopping lists
7
Are junction tables a good practice?
1
Users vs. People - where to keep the email address?
2
Design for user profile information and track changes
2
Storing Address Data Model
2
SQL Database Design: Balance between table scans and row duplication (Address example)
5
Storing personal data on an invoice to preserve data integrity
1
How to handle removing ASP.NET users where their UserID is tied to rows that should be maintained even after a user is deleted?
0
Best practice for other Table Data in an Order