When installing SQL Server, you get to specify SQL Server administrators, i.e., the list of users initially in the sysadmin role. By default, this list contains the current user. 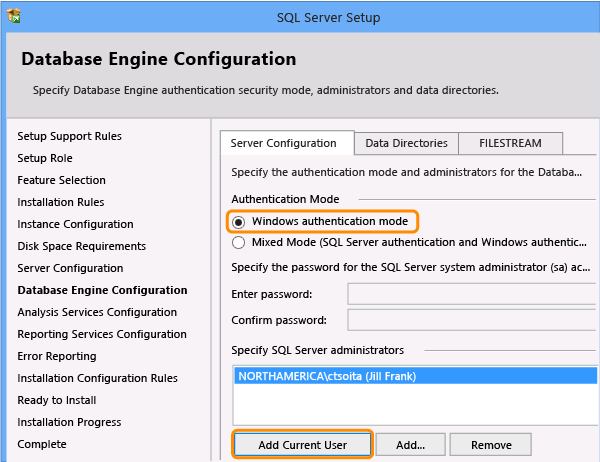 This default value strikes me as odd. Wouldn't BUILTIN\Administrators be a more sensible choice than the current user? After all, isn't the whole point of Windows authentication not having to manage two separate user/group directories? And local administrators can gain sysadmin rights anyway, if they want to, so it's not really a security feature either.

On the other hand, SQL Server was written by people much smarter than I am, so there might actually be a very good reason for this default value. What is it?

You're right: system administrators can gain sysadmin access, but you will find entries in the default trace for that action. Moreover, it requires restarting the service at least twice, which would hardly go unnoticed.

The main undesired effect of having BUILTIN\Administrators in your sysadmin role is the loss of control, which can manifest with one or more of the following annoying things:

Long story short, windows admins have a different skill set and a different mindset, not to mention different responsibilities: letting them manage your SQL Server instances is not a good idea.

My suggestion is to create a windows group for your DBAs and add that group to the sysadmin role upon each new SQL Server installation.

Using the local administrators group has been the default for a long time. But mainly in large enterprise environments you have an operations team for windows and a seperate operations team for SQL Server. Allowing everone to easily(!) gain access can be considered as security problem. Allowing only the current user can be explained with "secure by default".

As you said the local administrators can gain sysadmin rights. But in most cases they will leave traces of doing that.

Just to add on, the removal of BUILTIN\Administrators and NT AUTHORITY\SYSTEM from being default sysadmin was for the change in security with Microsoft products; going to the secure by default methodology. I am sure some portion of compliance had influence in Microsoft and SQL Server team choosing to do this as well.

Which actually, the main one that allowed a backdoor into your instance was use of the SYSTEM account as the service account. This backdoor was possible with no restart of the SQL Server service, and would go unnoticed unless monitoring was involved on the server. Which in SQL Server 2005 it was not supported if you to remove this account from the sysadmin role.

Fast forward now to Window Server 2012, an additional step for security that also removed the backdoor was with virtual accounts by default for each service, or configuring Managed Service Accounts. It is difficult, if not impossible, to use psexec to "impersonate" a virtual or MSA account that I know of now.

Not the answer you're looking for? Browse other questions tagged sql-server permissions installation authentication or ask your own question.