I know this has been asked here and here, but I have the same idea with a different possible implementation and I need some help.

Initially I had my blogstories table with this structure:

The reasons why I came here:

The unique codes generation process is in the CreateUniqueCode function:

The code is written in Hack, and was originally written in PHP by @Scott in his answer.

The fields author_id and editor_id can be different, because there are users with enough permissions to edit anyone's stories.

mysql database-design
Share
Improve this question
edited May 23 '17 at 12:40

Analyzing the scenario —which presents characteristics associated with the subject known as temporal databases— from a conceptual perspective, one can determine that: (a) a “present” Blog Story Version and (b) a “past” Blog Story Version, although very resembling, are entities of different types.

In addition to that, when working at the logical level of abstraction, facts (represented by rows) of distinct kinds must be retained in distinct tables. In the case under consideration, even when quite similar, (i) facts about “present” Versions are different from (ii) facts about “past” Versions.

Therefore I recommend managing the situation by means of two tables:

each with (1) a slightly distinct number of columns and (2) a different group of constraints.

Back to the conceptual layer, I consider that —in your business environment— Author and Editor are notions that can be delineated as Roles that can be played by a User, and these important aspects depend on data derivation (via logical-level manipulation operations) and interpretation (carried out by the Blog Stories readers and writers, at the external level of the computerized information system, with the assistance of one or more application programs).

I will detail all these factors and other relevant points as follows.

According to my understanding of your requirements, the following business rules formulations (put together in terms of the relevant entity types and their kinds of interrelationships) are specially helpful in establishing the corresponding conceptual schema:

Consequently, in order to expound my suggestion by virtue of a graphical device, I have created a sample IDEF1Xa diagram that is derived from the business rules formulated above and other features that seem pertinent. It is shown in Figure 1: 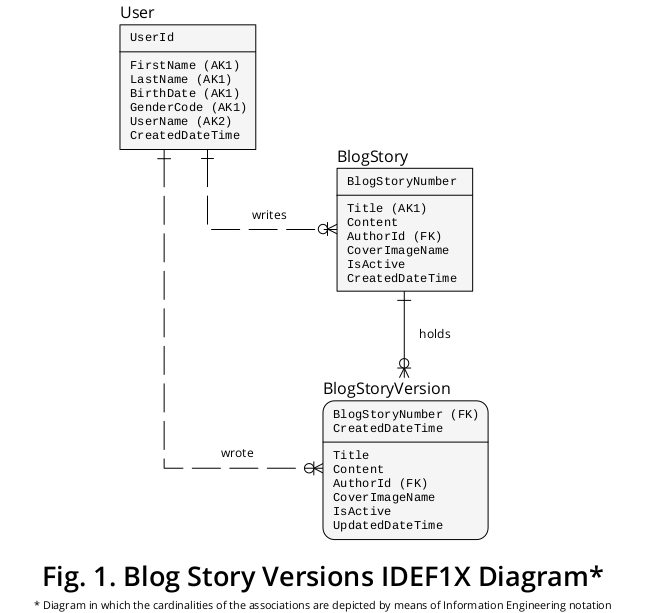 Why are BlogStory and BlogStoryVersion conceptualized as two different entity types?

a Integration Definition for Information Modeling (IDEF1X) is a highly recommendable data modeling technique that was established as a standard in December 1993 by the United States National Institute of Standards and Technology (NIST). It is based on the early theoretical material authored by the sole originator of the relational model, i.e., Dr. E. F. Codd; on the Entity-Relationship view of data, developed by Dr. P. P. Chen; and also on the Logical Database Design Technique, created by Robert G. Brown.

Then, based on the conceptual analysis previously presented, I declared the logical-level design below:

Tested in this SQL Fiddle that runs on MySQL 5.6.

As you can see in the demo design, I have defined the BlogStory PRIMARY KEY (PK for brevity) column with the INT datatype. In this regard, you may like to fix a built-in automatic process that generates and assigns a numeric value for such a column in every row insertion. If you do not mind leaving gaps occasionally in this set of values, then you can employ the AUTO_INCREMENT attribute, commonly used in MySQL environments.

When entering all your individual BlogStory.CreatedDateTime data points, you can utilize the NOW() function, which returns the Date and Time values that are current in the database server at the exact INSERT operation instant. To me, this practice is decidedly more suitable and less prone to errors than the use of external routines.

Provided that, as discussed in (now-removed) comments, you want to avoid the possibility of maintaining BlogStory.Title duplicate values, you have to set up a UNIQUE constraint for this column. Due to the fact that a given Title may be shared by several (or even all of the) “past” BlogStoryVersions, then a UNIQUE constraint should not be established for the BlogStoryVersion.Title column.

I included the BlogStory.IsActive column of type BIT(1) (though a TINYINT may as well be used) in case you need to provide “soft” or “logical” DELETE functionality.

Details about the BlogStoryVersion table

On the other hand, the PK of the BlogStoryVersion table is composed of (a) BlogStoryNumber and (b) a column named CreatedDateTime that, of course, marks the precise instant in which a BlogStory row underwent an INSERT.

The BlogStoryVersion.UpdatedDateTime column should retain, as expected, the point in time when a BlogStory row was modified and, as a consequence, added to the BlogStoryVersion table. Hence, you can use the NOW() function in this situation too.

Considerations for a Version column

It can be useful to think of BlogStoryVersion.CreatedDateTime as the column that holds the value that represents a particular “past” Version of a BlogStory. I deem this much more beneficial than a VersionId or VersionCode, since it is user-friendlier in the sense that people tend to be more familiar with time concepts. For instance, the blog authors or readers could refer to a BlogStoryVersion in a fashion similar to the following:

The Author and Editor Roles: Data derivation and interpretation

With this approach, you can easily distinguish who holds the “original” AuthorId of a concrete BlogStory SELECTing the “earliest” Version of a certain BlogStoryId FROM the BlogStoryVersion table by virtue of applying the MIN() function to BlogStoryVersion.CreatedDateTime.

In this way, each BlogStoryVersion.AuthorId value contained in all the “later” or “succeeding” Versions rows indicate, naturally, the Author identifier of the respective Version at hand, but one can also say that such a value is, at the same time, denoting the Role played by the involved User as Editor of the “original” Version of a BlogStory.

Yes, a given AuthorId value may be shared by multiple BlogStoryVersion rows, but this is actually a piece of information that tells something very significant about each Version, so the repetition of said datum is not a problem.

The format of DATETIME columns

As for the DATETIME data type, yes, you are right, “MySQL retrieves and displays DATETIME values in 'YYYY-MM-DD HH:MM:SS' format”, but you can confidently enter the pertinent data in this manner, and when you have to perform a query you just have to make use of the built-in DATE and TIME functions in order to, among other things, show the concerning values in the appropriate format for your users. Or you could certainly carry out this kind of data formatting via your application programms(s) code.

Every time that a BlogStory row suffers an UPDATE, you must ensure that the corresponding values that were “present” until the modification took place are then INSERTed into the BlogStoryVersion table. Thus, I highly suggest fulfilling these operations within a single ACID TRANSACTION to guarantee that they are treated as an indivisible Unit of Work. You may as well employ TRIGGERS, but they tend to make things untidy, so to speak.

Introducing a VersionId or VersionCode column

If you opt (because of business circumstances or personal preference) to incorporate a BlogStory.VersionId or BlogStory.VersionCode column to distinguish the BlogStoryVersions, you should ponder the following possibilities:

The later possibility opens another alternative:

Holding “original” and “subsequent” versions in a single table

Although maintaining all the BlogStoryVersions in the same individual base table is possible, I suggest not to do it because you would be mixing two distinct (conceptual) types of facts, which thus has undesirable side-effects on

But, on condition that you choose to follow that course of action, you can still take advantage of many of the ideas detailed above, e.g.:

You may find my answer to this question of help, since I as well propose enabling temporal capabilities in the concerning database to deal with a comparable scenario.

One option is to use Version Normal Form (vnf). The advantages include:

An additional benefit in your case, as versioned data is uniquely identified by making the effective date (the date the change was made) part of the key, a separate version_id field is not required.

Here is an explanation for a very similar type of entity.

is not in 3rd normal form. For every version of your story the author_id is the same. So you need two relations to overcome this