Postgres Count with different condition on the same query

I'm working on a report which has this following schema: http://sqlfiddle.com/#!15/fd104/2

The current query is working fine which looks like this: 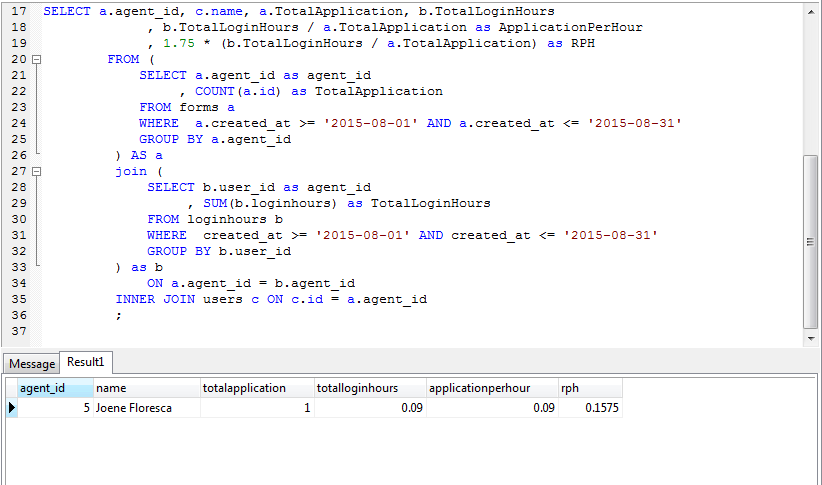 Basically it is a 3 table inner join. I did not make this query but the developer who left it and I want to modify the query. As you can see, TotalApplication just counts the total application based on the a.agent_id. And you can see the totalapplication column in the result. What I want is to remove that and change the totalapplication to a new two column. I want to add a completedsurvey and partitalsurvey column. So basically this part will become

But I dunno where to put that query or how will be the query look like.So the final output has these columns

If I understand you correctly, you are looking for a filtered (conditional) aggregate:

Edit
for older versions (< 9.4) you need to use a case statement:

Not the answer you're looking for? Browse other questions tagged postgresql join postgresql-9.3 count aggregate-filter or ask your own question.

2
Query with group by having count 0
0
Postgres INNER JOIN same table failing on CartoDB
0
Is there a more satisfactory query to get the rows of 'A' ordered by the number of rows of 'B' associated with that row of A in SQL
0
SQL query to count number of payments made in a time period with data from two different table
0
SELECT records based on return of COUNT query
1
Postgres - How to get Multi-Count Query using a Where Clause for a Join Table
1
Having a subquery somehow do the same group by as the outer query
1
Count nested joined table records only if the table associated via bridge table have two records with given names
0
Get count for different columns with different conditions from same table into one result table?