I am trying to know the best possible way to improve performance of a query given to me by my client. It contains a few tables which are joined and one of table is called dwh.fac_sale_detail which contains 1.5 billion rows.

This table dwh.fac_sale_detail is partitioned based on one of its columns called TradingDateKey1. It actually stores data in yyyymmdd format but it is of INT Datatype.

One of the guys in another team advised the following and I am trying to follow his advice but I am new to creating or altering of partitions and don't know if this will actually make any difference to query performance:

What he said in his own words is "The FactSalesDetail table is currently about 1.5 Billion Rows and is currently partitioned on TradingDate into 10 partitions by year with about 150 Million Rows per partition. It would be a good idea to further partition the latest year into monthly partitions and apply a columnstore index on all the partitions. Applying the index on each partition will be a once-off and you should only need to maintain the index for the current partition going forward."

Here is the query plan for the query I am trying to optimize.

Please also see the attached screenshots for a better understanding:

Thanks for adding the query plan; it is very informative. I have a number of recommendations based on the query plan, but first a caveat: don't just take what I say and assume it's correct, try it out (ideally in your testing environment) first and make sure you understand why the changes do or don't improve your query!

The query plan: an overview

From this query plan (as well as the corresponding XML), we can immediately see a few useful pieces of information:

Optimization: columnstore or not

This is a tough question, but on balance I would not recommend columnstore for you in this case. The primary reason is that you are on SQL 2012, so if you are able to upgrade to SQL 2014 I think it might be worth trying out columnstore.

In general, your query is the type that columnstore was designed for and could benefit greatly from the reduced I/O of columnstore and the greater CPU efficiency of batch mode.

However, the limitations of columnstore in SQL 2012 are just too great, and the tempdb spill behavior, where any spill will cause SQL Server to abandon batch mode entirely, can be a devastating penalty that might come into play with the large volumes of rows you are working with. If you do go with columnstore on SQL 2012, be prepared to baby-sit all of your queries very closely and ensure that batch mode can always be used.

I don't think that more partitions will help this particular query. You are welcome to try it, of course, but keep in mind that partitioning is primarily a data management feature (the ability to swap in new data in your ETL processes via SWITCH PARTITION and not a performance feature. It can obviously help performance in some cases, but similarly it can hurt performance in others (e.g., lots of singleton seeks that now have to be performed once per partition).

If you do go with columnstore, I think that loading your data for better segment elimination will be more important than partitioning; ideally you will probably want as many rows in each partition as possible in order to have full columnstore segments and great compression rates.

Because you have a huge fact table and a handful of very small (hundreds or thousands of rows) set of rows from each dimension table, I would recommend an approach where you explicitly create a temporary table containing only the dimension rows that you plan to use. For example, rather than join to Dim_Date with a complicated logic like cast(right(ALHDWH.dwh.Dim_Date.Financial_Year,4) as int) IN ( 2015, 2014, 2013, 2012, 2011 ), you should write a pre-proccessing query to extract only the rows from Dim_Date that you care about and add the appropriate PK to those rows.

This will allow SQL Server to create statistics on just the rows you are actually using, which may yield better cardinality estimates throughout the plan. Because this pre-processing would be such a trivial amount of work compared to the overall query complexity, I would highly recommend this option.

It's likely that extracting the data from Dim_Date into it's own table and adding a primary key to that table would also help to reduce thread skew (an imbalance of work across threads). Here's a picture that helps show why: 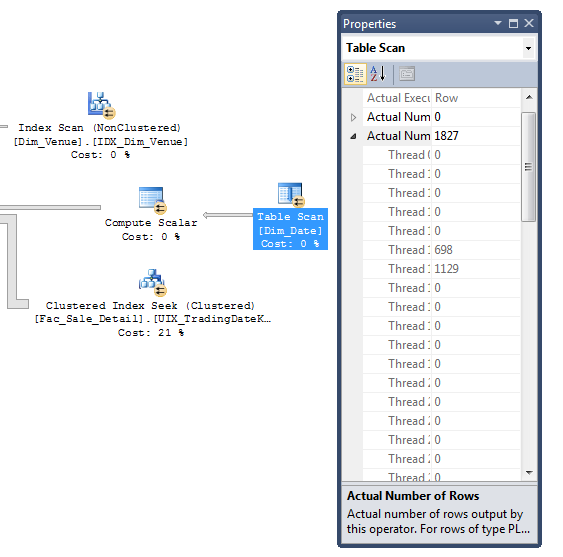 Because SQL Server uses statistics in order to allocate ranges of rows to threads, the poor cardinality estimates in this case are likely the root cause of the very poor distribution of rows.

Thread skew on 1,872 rows may not matter much, but the painful point is that this then cascades down to the seek into your 1.5 billion row fact table, where we have 30 threads sitting idle while 600 million rows are being processed by 2 threads. 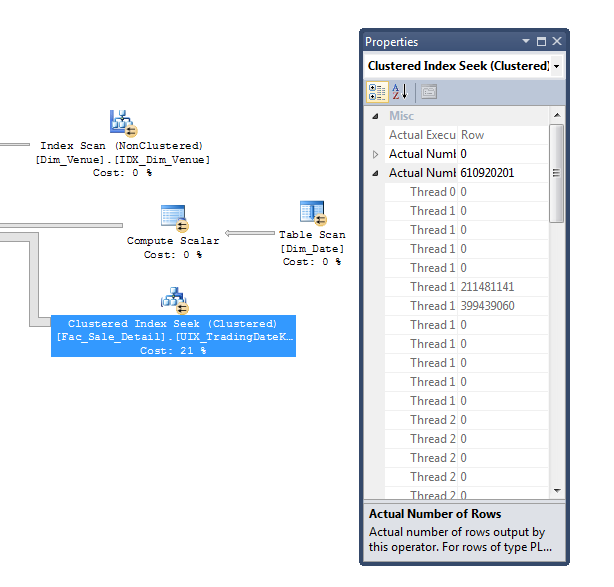 Optimization: getting rid of the sort spill

Another area I would focus on is the sort spill. I think that the primary problem in this case is poor cardinality estimates. As we can see below, SQL Server thinks that the grouping operation being performed by the combination of a Sort and Stream Aggregate will yield 324 million rows. However, it actually yields just 643,000 rows.

If SQL Server knew that so few rows would come out of this grouping, it would almost certainly use a HASH GROUP (Hash Aggregate) rather than a SORT GROUP (Sort-Stream) in order to implement your GROUP BY clause.

It's possible that this may fix itself if you make some of the other changes above in order to improve cardinality estimates. However, if it doesn't you could try to use the OPTION (HASH GROUP) query hint in order to force SQL Server to do so. This would let you evaluate the magnitude of the improvement and decide whether or not to use the query hint in production. I would generally be cautious about query hints, but specifying just HASH GROUP is a much lighter touch than something like using a join hint, using FORCE ORDER, or otherwise taking too much of the control out of the query optimizer's hands.

One last potential problem was that SQL Server estimated that the query would want to use 72GB of memory, but your server was not able to provision this much memory to the query. While it's technically true that adding more memory to the server would help, I think there are at least a couple other ways to attack this problem:

Optimizing STAR Queries is in many respects the same as optimizing other query styles. Additionally STAR Queries present some special considerations. It may pay for you to revisit some of the essentials and basics.

With this in mind, start by asking yourself some questions:

As to your friend's advice, you should ask for more clarifications. There are clearly many assumptions there. 1. that older partitions are readonly. 2. that your query is fetching specific months rather than crossing years (compare two quarters for example).

Lastly consider that if your friend things partitioning and columnstore might be significant aids, then that suggests your query is not really a STAR Query since if it was, then the BITMAP INDEXING would be the main performance driver of the query and its partitioning and columnar storage would mean very little to overall performance. Thus it should be apparent that you need first to look at what the query wants and map it to the right storage design.

Not the answer you're looking for? Browse other questions tagged sql-server ssis partitioning or ask your own question.