Why 't' and 'f' instead of TRUE and FALSE

Why does PostgreSQL return 't' and 'f' instead of TRUE and FALSE?

The documentation itself advises us to use TRUE and FALSE when inserting boolean values or making comparisons, but returns a different set of values when selecting the value from the database.

Is there a reason for this behavior? Have the PostgreSQL commmunity ever tried to change that?

PostgreSQL does not return these instead of boolean values. It is some clients (for example, psql and pgAdminIII) which represents TRUE with t and FALSE with f - try the same query in another client and you will see something else. See, for example, what DBVisualizer gives you: 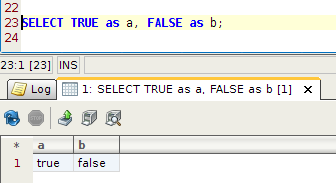 I guess the reason for showing t and f is simply sparing space in a command-line client that lacks horizontal scrolling abilities.

Note: I am in no way affiliated to DbVis Software.

TRUE and FALSE as cited in the question context are keywords, not values that can be returned to a client. If true as a value was returned that would be 4 times bigger than t, so that's not better.

Statistically 1 and 0 are often present as numbers so they would be harder to distinguish. OTOH t or f is a strong visual hint that we have a Boolean. Same as Y and N in a char column.

boolean is neither binary nor a bitstring. boolean is boolean and operates with a ternary logic around the values true, false and null.

Some other RDBMS lack a proper implementation, which may add to the confusion. If you want 0 and 1 instead, just cast the boolean to integer e.g. SELECT true::int.

This change causes conversions of Booleans to strings to produce true or false, not t or f. Other type conversions may succeed in more cases than before; for example, assigning a numeric value 3.9 to an integer variable will now assign 4 rather than failing. If no assignment-grade cast is defined for the particular source and destination types, PL/pgSQL will fall back to its old I/O conversion behavior.

Not the answer you're looking for? Browse other questions tagged postgresql datatypes psql or ask your own question.

6
PostgreSQL: DBLink weird permission/connection error
3
Continuously arriving data with fast filtering on date in PostgreSQL
2
How to store short stories for access to individual sentences?
4
Does changing the length limit (type-modifier) of varchar() result in a table or index rewrite?
2
Is there some function in PostgreSQL to simply check if the input string is valid UTF-8 according to PG?
1
Row estimate more accurate for primary key column than for others?