Why is it taking longer to create an index after column size increases?

Our vendor changed column widths on almost every column in the entire database. The database is around 7TB, 9000+ tables. We are trying to create an index on a table that has 5.5billion rows. Before the vendor's upgrade we could create the index in 2 hours. Now it takes days. What they have done is increase any varchar(xx) size to varchar(256). So most columns used to be varchar(18) or varchar(75), etc.

There is not an increase in data, the table doesn't take up any more "space" than it did before all the column width increase, but performance to create something as simple as an index is now taking an unreasonable amount of time.

Can anyone explain why it is taking so much longer to create and index when the only thing done was increasing the size of the columns?

The index we are trying to create is nonclustered since the pk is the clustered index. After several attempts to create the index, we gave up. I think it ran 4 or 5 days without completion.

I tried this in a non-production environment by taking a file system snapshot and brought the database up on a quieter server.

Remus has helpfully pointed out that the max length of the VARCHAR column impacts the estimated row size and therefore memory grants that SQL Server provides.

I tried to do a bit more research to expand on the "from this on things cascade" part of his answer. I don't have a complete or concise explanation, but here is what I found.

I created a full script that generates a fake data set on which index creation takes roughly 10x as long on my machine for the VARCHAR(256) version. The data used is exactly the same, but the first table uses the actual max lengths of 18, 75, 9, 15, 123, and 5, while all columns use a max length of 256 in the second table.

Here we see that the original query completes in about 20 seconds and the logical reads are equal to the table size of ~1.5GB (195K pages, 8K per page).

For the VARCHAR(256) table, we see that the elapsed time has increased dramatically.

Interestingly, neither the CPU time nor the logical reads increase. This makes sense given that the table has the exact same data, but it doesn't explain why the elapsed time is so much slower.

If we capture a bit more detail (using p_perfMon, a procedure that I wrote), we can see that the vast majority of the I/O is performed on the LOG file. We see a relatively modest amount of I/O on the actual ROWS (the main data file), and the primary wait type is LATCH_EX, indicating in-memory page contention.

We can also see that my spinning disk is somewhere between "bad" and "shockingly bad", according to Paul Randal :)

For the VARCHAR(256) version, the I/O and wait stats look completely different! Here we see a huge increase in the I/O on the data file (ROWS), and the stall times now make Paul Randal simply say "WOW!".

It's not surprising that the #1 wait type is now IO_COMPLETION. But why is so much I/O generated?

From the query plan, we can see that the Sort operator has a recursive spill (5 levels deep!) in the VARCHAR(256) version of the query. (There is no spill at all in the original version.)

We can use sys.dm_exec_query_profiles to view live query progress in SQL 2014+. In the original version, the entire Table Scan and Sort are processed without any spills (spill_page_count remains 0 throughout).

In the VARCHAR(256) version, however, we can see that page spills quickly accumulate for the Sort operator. Here is a snapshot of the query progress just before the query completes. The data here is aggregated across all threads.

If I dig into each thread individually, I see that 2 threads complete the sort within about 5 seconds (@20 seconds overall, after 15 seconds spent on the table scan). If all threads progressed at this rate, the VARCHAR(256) index creation would have completed in roughly the same time as the original table.

However, the remaining 6 threads progress at a much slower rate. This may be due to the way that memory is allocated and the way that the threads are being held up by I/O as they are spilling data. I don't know for sure though. 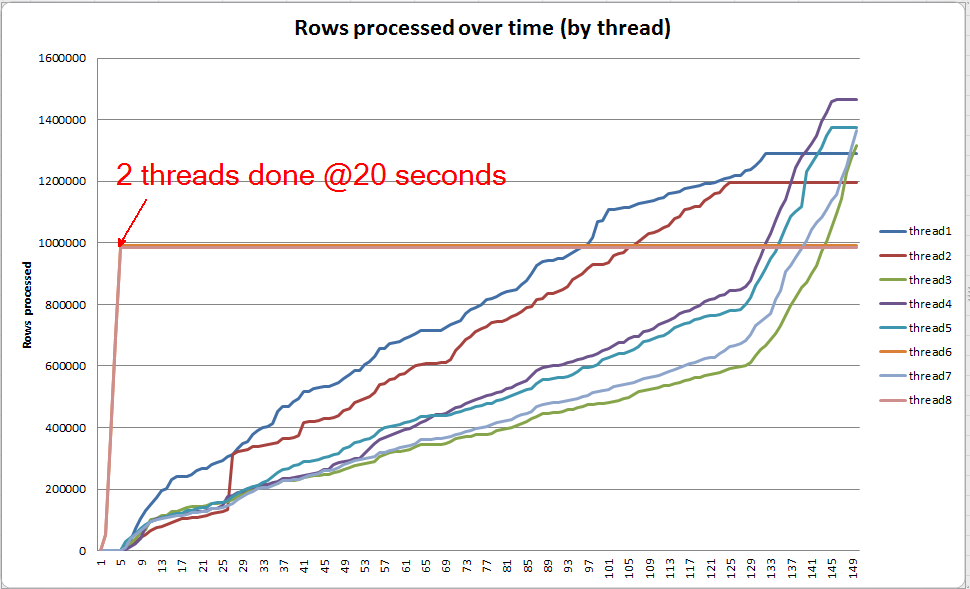 There are a number of things you might considering trying:

Paul White has a nice blog post on the internals of SQL Server sorts that may be of interest. It does talk a little bit about spilling, thread skew, and memory allocation for parallel sorts.

The intermediate sort table will be differently estimated between the two cases. This will lead to different memory grant requests (VARCHAR(256) will be bigger) and likely a much smaller actual grant, percent wise, compared with the 'ideal' request. I guess this leads to spills during sort.

Testing the script from Geoff (on 100k rows only) I can clearly see difference in the sort estimated row size (141B vs. 789B). From this on things cascade.