How to manage very large amount of data in mysql

I have a table in MySQL in which I write logs of users in a specified format. It have just 2 columns:id (auto-increment), log. Currently data is very less, so I'm using this.

Now there is a requirement which involves insertion of very large amount of data, (may be 60-70x of current), that may even involve concurrent insertion of even approx 2000 record. It will obviously slow down our system, and cant be used in production environment. Moreover database size will become an issue.

I need some ideas that will serve my purpose.

Use a "staging table". Insert the unprocessed data into a separate table, then remove it when processed.

How big will the table eventually become? A million row -- no problem. A billion rows -- let's discuss more details.

I have a few datasets I'm pulling into mysql, the small one has about 1.5 billion records in it (the large one has about 8 billion). The server is some 64 bit virtual machine in our corporate data center. Since it was specked out to run databases and thats all the VM is used for i presume that it has a reasonable ammount of memory and is at least a dual core - more likely a quad core instance. My table basically has 8 columns that are integer columns. Each of the columns has a b-tree index. The average size of the records is 37 bytes. my insert scheme is to use SQL prepaired statements with placeholders. Using this scheme i insert 5,000 records at a time. Experimentation has shown that a somewhat smaller chunk of records in my case is a little bit faster but in the big scheme of things i really dont care that much :)

since its just been chugging along since last night, my conclusion is that due to the nature of the data- many fields are in near sorted order, I have hit along a pathological case for a b-tree - turning it into a poorly implemented linear search!

Moral to this story? when injesting LARGE ammounts of data, its probably a good idea - in addition to tuning your server - to turn or drop as many indices as you can and then reindex it later. Having said that, one needs to have a good handle on just how much overhead the indexing has at insert time compared to re-indexing the whole database. In my case where there will be essentially NO updates - just pure reads/queries, doing it on the tail end, makes good sense.

to give you the (d)illusion of useful data: one java program running at once (single threadded access to mysql) 876000 records are read from the data source and written 5,000 records at a time. time is tracked for each 'batch' of 87600. 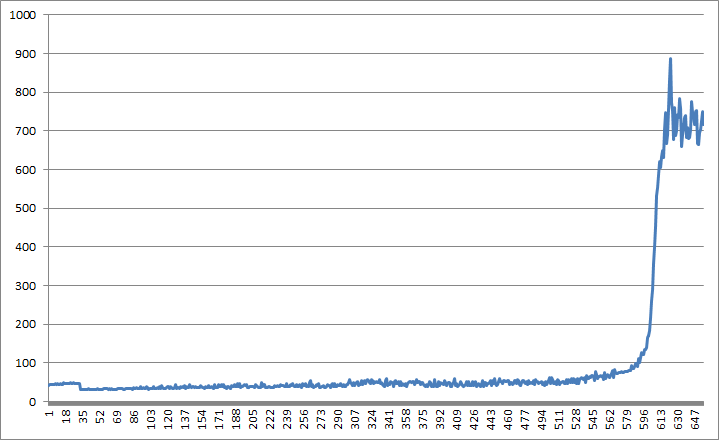 0
Best practices with large amount of data
3
What would be most elegant way to replicate data contents periodically into a MySQL table?
0
Database design for a group-buying site
2
Concurrency when simulating autoincrement with triggers on MySQL
4
Write-lock a whole table during transaction
2
What is the correct implementation of handling concurrent SQL inserts while ensuring a non-primary key column (i.e. wid) unique and auto-incremental?
0
MySQL - design help for scale
1
Very large MySQL backup
0
Database design for large amount of sensors at very fast intervals