I have already run the upsizing wizard from my production Access 2010 .accdb database to create all the table structures and move the data on to our new SQL Server 2014. This included adding some PKs on the server which didn't exist in Access and some other clean up.

Using Right-click | Tasks | Import Data to get the Import and Export Wizard, when I click the drop down on Data source, I have an option for Microsoft Access (Microsoft Jet Database Engine) which doesn't recognize the .accdb format.

I've seen screen shots from various places on the web of the Import Wizard with a Microsoft Access (Microsoft Access Database Engine) option which does recognize the .accdb format.

Why would my Import Wizard be missing this data source option, and what can I do to resolve that?

Based on Aaron's suggestions, I checked the ODBC driver, and it appears to be the 64-bit version: 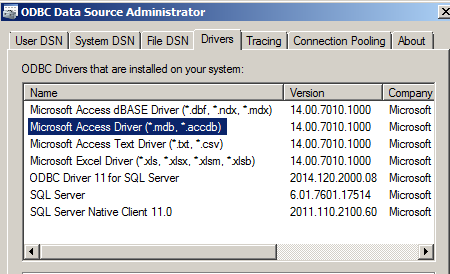 If I explicitly run c:\windows\SysWOW64\odbcad32.exe, I get what must be the 32-bit version: 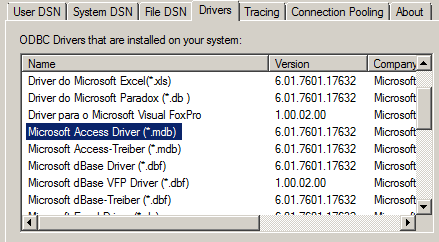 I'm running 64-bit Office on a 64-bit Win7 installation, and I'd assume that SQL Server 2014 is 64-bit by default (I didn't install the server nor the SSMS on my machine).

It seems that the initial link Aaron provided addresses the exact opposite of what I'm trying to accomplish. That issue seems to be trying to explicitly use the 32-bit driver on a 64-bit system, while I seem to be stumbling into the 32-bit driver when I want the 64-bit. It does seem that there may be something wrong in the registry, as that question mentions, but I'm not comfortable enough to root around in there on my own, though I can certainly follow some instructions.