With SourceTable having >15MM records and Bad_Phrase having >3K records, the following query takes almost 10 hours to run on SQL Server 2005 SP4.

In English, this query is counting the number of distinct phrases listed in Bad_Phrase that are a substring of the field Name in the SourceTable and then placing that result in the field Bad_Count.

I would like some suggestions on how to have this query run considerably faster.

While I agree with other commenters that this is a computationally expensive problem, I think that there is a lot of room for improvement by tweaking the SQL that you are using. To illustrate, I create a fake data set with 15MM names and 3K phrases, ran the old approach, and ran a new approach.

The query is actually proportional to the length of the name as well; while this is a bit hidden in the query plan, it comes through in the "number of executions" for seeking into the table spool. In the actual plan, we can see that this occurs not just once per name, but actually once per character offset within the name. So this approach is O(# names * # phrases * name length) in run-time complexity.

This code is also available in the full pastebin but I've copied it here for convenience. The pastebin also has the full procedure definition, which includes the @minId and @maxId variables that you see below to define the boundaries of the current batch.

First, we generate the substring starting at each character offset

Then create a clustered index on these substrings

Now, for each bad phrase we seek into these substrings to identify any matches. We then compute the number of distinct bad phrases that matches one or more substrings of that string. This is really the key step; because of the way that we have indexed the substrings, we no longer have to check a full cross-product of bad phrases and names. This step, which does the actual computation, accounts for only about 10% of the actual run-time (the rest is the pre-processing of substrings). 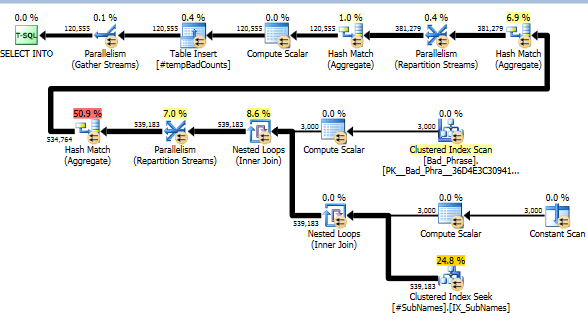 Lastly, perform the actual update statement, using a LEFT OUTER JOIN to assign a count of 0 to any names for which we found no bad phrases.

The new approach can be divided into two phases, pre-processing and matching. Let's define the following variables:

The pre-processing phase is O(N*L * LOG(N*L)) in order to create N*L substrings and then sort them.

The actual matching is O(B * LOG(N*L)) in order to seek into the substrings for each bad phrase.

Aaron Bertrand explores this type of solution in more detail in his blog post One way to get an index seek for a leading %wildcard.

Let's shelve the obvious issue brought up by Aaron Bertrand in the comments for a second:

The fact that your subquery uses the wild cards on both sides dramatically affects sargability. To take a quote from that blog post:

That means SQL Server has to read every row out of the Product table, check to see whether it’s got “nut” anywhere in the name, and then return our results.

Swap out the word "nut" for each "bad word" and "Product" for SourceTable, then combine that with Aaron's comment and you should start to see why it is extremely hard (read impossible) to make it run quickly using your current algorithm.

I see a few options:

Depending on your requirements I would recommend either option 3 or 4.

first that is just a strange update

Like '%' + [Bad_Phrase].[PHRASE] is killing you
That cannot use an index

The data design is not optimal for speed
Can you break the [Bad_Phrase].[PHRASE] up into single phrase(s) / word?
If the same phrase / word appears more than one you can enter it more than once if you want it to have a higher count
So the number of rows in bad pharase would go up
If you can then this will be much much faster

Not the answer you're looking for? Browse other questions tagged sql-server sql-server-2005 update subquery or ask your own question.

0
Updating a local table with a per-row count(*) which is an aggregate of inner joins on remote server
8
Why does SQL Server run a subquery for each row of the table it's qualifying?
2
Very slow update with subquery (different tables)
2
Simple update takes forever
1
Large table size, affecting usage
0
MYSQL Multiple Join Query to Display Unique Column Values in One Field for Single Record
6
Counting occurrence of words in table is slow
0
Update with subquery referencing the main table
0
UPDATE table IF data in another