I have a query, and even using SQL Sentry, I can't eliminate the index scan.

This is the index I made:

And, this is the analysis:

Why is the plan showing index scan? I'm covering all columns. I used option(recompile) to update the plan.

Is this index wrong? The output is only codcliente. 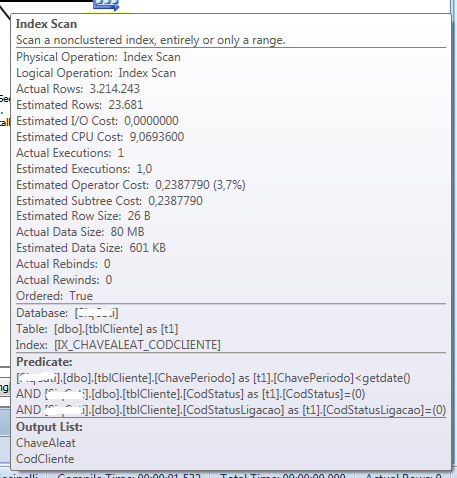 I have 10-30 queries running at the time, and theres no wait_info problems.

Just because you have a covering index doesn't mean it won't scan, nor does it mean that a scan isn't still the best way to access the requested data.

You're returning, what, 3 million rows? Even if that's not most of the table, it still wouldn't make much sense to perform 3 million seek operations, nor is it likely there would be any benefit in seeking to the first row and performing a range scan for the rest. There is also the issue that multiple EXISTS clauses - multiple of which do not join to the index's leading key column - will not likely all be able to take advantage of the same output from the seek. And you have filters on all of the INCLUDE columns - they're not part of the key, so seeks on those columns are going to be difficult (in fact the only case where I've seen an index still be used to seek when there are WHERE clauses against non-key columns is when the column was BIT, and those scenarios did not introduce all the other variables you have above). You're also using PIVOT and aggregating, which I'm sure don't help.

Also, what table is CodCampo in (why isn't it properly prefixed with a table alias)? You may have one or both of the following two problems:

You could try running the query with the FORCESEEK hint (also mentioned in Paul's example) and it will either fail to produce a plan (unlikely) or you will get a plan that you can share with us and, if you also share the scan plan you get without the hint, we can give further insight into why SQL Server chose the scan instead.

As an aside (this certainly won't help you get a seek), since the estimates were far lower, I'd check that your statistics are current.

And finally, don't always assume that a scan is bad and something you need to eliminate! In a lot of cases, a scan really is the best way to retrieve the data.

Not the answer you're looking for? Browse other questions tagged sql-server sql-server-2008 performance clustered-index query-performance or ask your own question.

8
logical reads vs. scan count
1
Problem passing rows results to columns names
11
Postgres is performing sequential scan instead of index scan
3
Why seq-scan can be much faster than index-scan and index-only-scan in this simple query?
15
Why is my EXISTS query doing an index scan instead of an index seek?
3
Clustered index scan appears to be costed too low with row count spool
14
Why does NOLOCK make a scan with variable assignment slower?
2
Clustered index scan in query with non clustered index filter
3
Clustered Index Scan on partitioned table even when there is covering index
7
Eliminate key lookup in execution plan