Unable to create a Filtered Index on a Computed Column

In a previous question of mine, Is it a good idea to disable lock escalation while adding new calculated columns to a table?, I am creating a computed column:

The calculated column is PERSISTED, and according to computed_column_definition (Transact-SQL):

But when I try to create an index on my column I get the following error:

How can I create a filtered index on a computed column?

Is there an alternative solution?

Unfortunately as of SQL Server 2014, there is no ability to create a Filtered Index where the Filter is on a Computed Column (regardless of whether or not it is persisted).

There has been a Connect Item open since 2009, so please go ahead and vote for it. Maybe Microsoft will fix this one day.

Aaron Bertrand has an article that covers a number of other issues with Filtered Indexes.

Although you cannot create a filtered index on a persisted column, there is a fairly simple workaround that you may be able to use.

As a test, I've created a simple table with an IDENTITY column, and a persisted computed column based on the identity column:

Then, I created a schema-bound view based on the table with a filter on the computed column:

Next, I created a clustered index on the schema-bound view, which has the effect of persisting the values stored in the view, including the value of the computed column:

Insert some test data into the table:

Create a statistics item and an index on the view:

Performing SELECT statements against the table with the persisted column may now automatically use the persisted view, if the query optimizer determines it makes sense to do so:

The actual execution plan for the above query shows the query optimizer chose to use the persisted view to return the results: 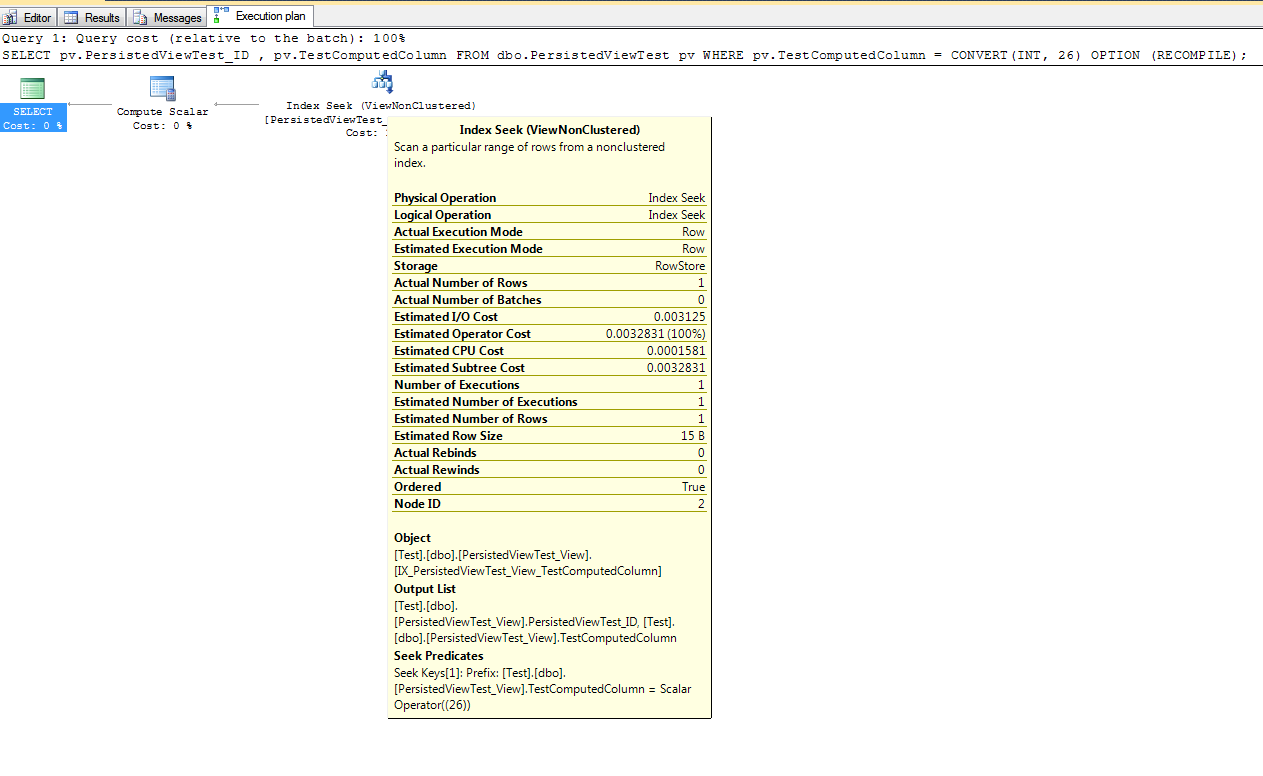 You may have noticed the explicit conversion in the WHERE clause above. This explicit CONVERT(INT, 26) allows the query optimizer to properly use the statistics object to estimate the number of rows that will be returned by the query. If we write the query with WHERE pv.TestComputedColumn = 26, the query optimizer may not properly estimate the number of rows since 26 is actually considered a TINY INT; this may cause SQL Server to not use the persisted view. Implicit conversions can be very painful, and it pays to consistently use the correct data types for comparisons and joins.

Of course, all the standard "gotchas" resulting from using schema binding do apply to the above scenario; this may prevent using this workaround in all scenarios. For instance, it will no longer be possible to modify the base table without first removing the schema binding from the view. In order to do that, you'll need to remove the clustered index from the view.

Thanks to Ian Ringrose for pointing out the Enterprise Edition limitation above, and to Paul White for the (NOEXPAND) hint.

This answer by Paul has some interesting details about the query optimizer in relation to persisted views.

From Create Index and its whereclause, this is not possible:

Before we had computed columns we used triggers to calculate the columns value whenever the row was changed or inserted.

(A trigger could also be used to insert/remove the PK of the item from a 2nd table that was then used in queries.)

This is an attempt at improving Hannah's work around. In her solution, she suggests using 2 indexes on the view and a statistics object.

The following analysis tries to answer this question.

I'm using the exact same code, except I'm not creating a nonclustered index on the view.

I'm also not creating a statistics object. If you are following along and using SQL Server Management Studio (SSMS) to enter the code below, you should be aware that you may see some red squiggly lines - which look like errors. These are (probably) not errors, but involve an issue with intellisense.

You can either disable intellisense or just ignore the errors and run the commands. They should complete without errors.

The following execution plan (with no view / index view) is produced after the following query is run against the table:

Next, the filtered view and clustered index on that view are created:

Now, lets try running the query again, but this time against the view:

The new execution plan is now:

If the new plan is to be believed, after the addition of the view and clustered index on that view, the statistics appear to indicate that the time required to execute the query has now doubled. Also, notice that no new statistics object was created to support the new index after the query was run, which is different from the query on the table.

The query plan still suggests that creation of a nonclustered index would be quite helpful in improving the performance of the query. So, does that mean that a nonclustered index has to be added to the view before the desired performance improvement can be obtained? There is one last thing to try. Modify the query to use the "WITH NOEXPAND" option:

This results in the following query plan:

This execution plan looks quite similar to the one that was produced with the nonclustered index given in Hannah's answer. But, this one is done with one less (nonclustered) index and one less statistics object.

It turns out that the NOEXPAND option has to be used with the express and standard versions of SQL Server to make proper use of an indexed view. Paul White has an excellent article that expounds on the benefits of using the NOEXPAND option. He also recommends this option be used with the enterprise edition to ensure the uniqueness guarantee provided by the view indexes is used by the optimizer.

Less than 5 months ago, Microsoft made the developer editions free. The license restricts the use to development only, which means the database can't be used in a production environment. So, if you have been looking to test out memory optimized tables, encryption, R, etc. then you no longer have the no-license excuse. I successfully installed it on my computer a few days ago along side SQL Server 2014 Express with no issues.

Not the answer you're looking for? Browse other questions tagged sql-server index sql-server-2014 computed-column filtered-index or ask your own question.

19
What factors go into an Indexed View's Clustered Index being selected?
5
Implicit conversion warning despite persisted computed column vs. performance hit from UDF in persisted computed column definition
5
dateadd in the where clause - how can I avoid a full scan in this particular situation?
0
a filtered index to support a query - is it possible to consider nulls?
0
Get the settings associated with a stored procedure in relation to filtered indexes