LEFT OUTER JOIN versus WHERE IS NULL

For some irrelevant reasons it's hard for me to get LEFT OUTER JOINS working with multiple ON clauses. Since simply moving these clauses to the WHERE statement results in different result sets, I add an additional OR IS NULL check.

LEFT OUTER JOIN WHERE OR IS NULL query

Simplified definition for both tables:

These queries seem to give exactly the same query plan in SQL Server Management Studio, but I wonder if there're situations where the one outperforms the other.

The LEFT OUTER JOIN ON version is the standard way to write this logic, so I would highly recommend using this version rather than fiddling around with OR for performance reasons.

However, as ypercube has helpfully pointed out, the queries are not quite equivalent if the data and sharding methodology means that a Table1.Id value can end up in a different ShardKey than the ShardKey of the corresponding Table1.table2 value. If that happens, then the OR t2.ShardKey IS NULL portion of the 2nd query will be triggered and retain a row with matching Ids even if the ShardKey does not match.

In general, I suspect that they will typically result in similar query plans. Given two equivalent queries (which yours may or may not be, depending on the sharding methodology), by formulating the query in the standard way you are more likely to be working with the query optimizer rather than forcing it to recognize that the two queries can be expressed in similar ways and apply the appropriate simplifications.

If you want to be even more explicit about applying @shardkey to each table in the join, you can do that directly in the LEFT OUTER JOIN. However, SQL Server will be able to easily recognize that your original query is equivalent to this one.

An example of different query plans

In particular, the seek into Table2 should be a seek on both id and ShardKey, but in the LEFT OUTER JOIN WHERE OR IS NULL version it is a seek only on id and a subsequent Filter operator tests all matching rows in order to apply the appropriate ShardKey restriction.

This difference may or may not be meaningful in your specific case (especially if Id is unique without adding in the ShardKey). However, if your real version actually uses table partitioning by ShardKey (and this just isn't represented in the simple sample query), you will likely be losing the benefit of partition elimination for the seek into Table2. 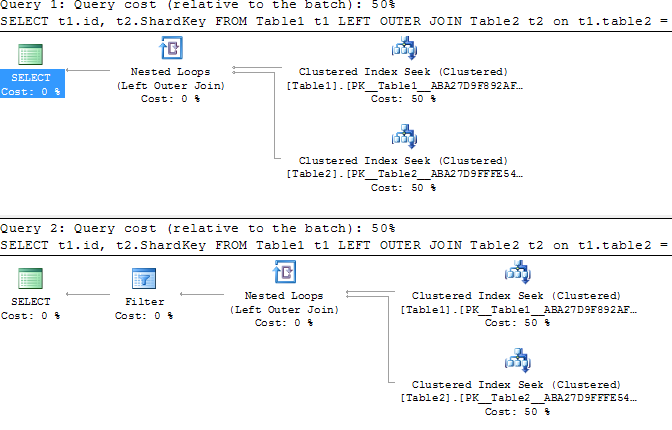 Not the answer you're looking for? Browse other questions tagged sql-server t-sql sql-server-2014 or ask your own question.

55
Why aren't primary key / foreign key matches used for joins?
10
Why is this Full Outer Join not working?
2
deteriorating stored procedure running times
2
Replacing isnull condition in where clause
0
changing from inner joins to left joins to include null values?
1
Poor SQL Server Performance With Nested "OR" Conditions In LEFT OUTER JOIN
12
Inner join elimination inhibited by prior outer join
12
Why Does the SQL Server Query Optimizer Not Convert an OUTER JOIN to an INNER JOIN When a Trusted Foreign Key Is Present?