The control flow of my SSIS package is not behaving as expected.

What I want to achieve:

If I setup my control flow to do only one or the other, it works.

This flow works as expected. However, I would like to, if value == 0, continue to the MessageBox after Enable CLR on Server.

I tried changing the control flow to this

Now, what happens is this:

Can anyone help me understand this, and/or point me to a good resource about SSIS Conditional Control Flow?

Your precedent constraint defaults to an AND situation. The preceding task must return success and the expression must be true.

Since only one of those situations will work out, you need to swing the PC to be OR situation 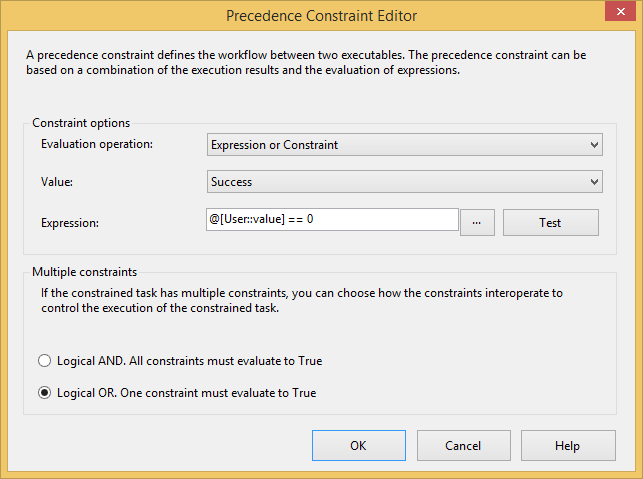 That results in the green dotted lines instead of solid 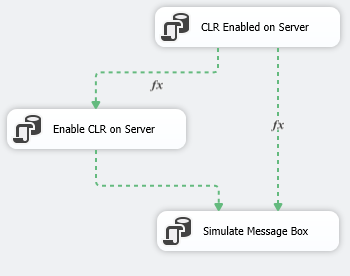 As an FYI, in your Script task, assuming this runs in an automated fashion (SQL Agent), since you're using a message box, it will fail. There's a System level variable, System::InteractiveMode which is a boolean. It indicates whether you're running in an environment where you can interact with the desktop or not. If that evaluates to false and you attempt any GUI activity, the package will error out.

I find it helpful to add code like the following

There I have a check against my interactive mode and only attempt to display something if I can. I also go ahead and fire an OnInformation event because that's automatically logged in the 2012+ Project Deployment Model, shows in both the GUI and the Output panel in Visual Studio/SSDT/BIDS and is easily recorded from DTEXEC.exe call by appending I to the reporting parameter i.e. /rep EI

Not the answer you're looking for? Browse other questions tagged sql-server ssis ssdt or ask your own question.

0
how to access my password in SSIS 2005 by VB.NET
4
Conditional data flow task in SSIS
0
Question regarding flow control of SQL based jobs in SSIS
1
Can I access the file stream shared folder using Listeners in case of AlwaysOn cluster environment?
0
ssis control flow loop
0
Precedence constraint does not run in SSIS package
0
Transfer data from MS SQL to PostgreSQL with SSIS ODBC destination