Best way to linking different entities to a single table

I'm running for office and have created a web app for tracking my door knocks to voters at their homes. The database contains a table called voters that contains all the necessary information about voters in my community. I'm using mysql.

I'd like to add a new feature to track donors to my campaign. Not all of these donors live in the community and do not vote in the district where I'm running for office. I do not need to track the same kind of info for these individuals as I do for the voters so I'm going to place these individuals into a table called nonvoters.

Now, the individuals in my voters table can also make donations, and I want to track those as well.

To track the donations from both voters, nonvoters and organizations, I want to set up a new table called donations. This table would contain the appropriate details about each donation.

But I'm uncertain as to what the best structure is for linking the donations table to the voters, nonvoters, and organizations table should be. If I create a column called donor_id in the table to key it to the donors information, there's no way to know which table that ID refers to. So do I set up three columns, nonvoter_id, voter_id and org_id and insert the ID into the applicable column depending on whether the donor is a voter? This seems weird.

Or maybe I create a new column in each of the three tables called donor_id that I can use to link my data to the donations table. If I went this route, it seems like I'd have to do a some behind the scenes work to ensure the donor_id was unique and was keyed to the data inside the donations table.

Or maybe there are other approaches I'm not familiar with. Any guidance is appreciated.

Good question, you have provided a quite engaging context and analysis.

According to my understanding of your scenario description, some important aspects can be handled by means of (Super)Type-Subtype relationships. In this regard, this post provides relevant information.

As per your current specifications, the following assertions appear valid:

Therefore, I have derived the IDEF1X[2] logical data model presented in Figure 1. 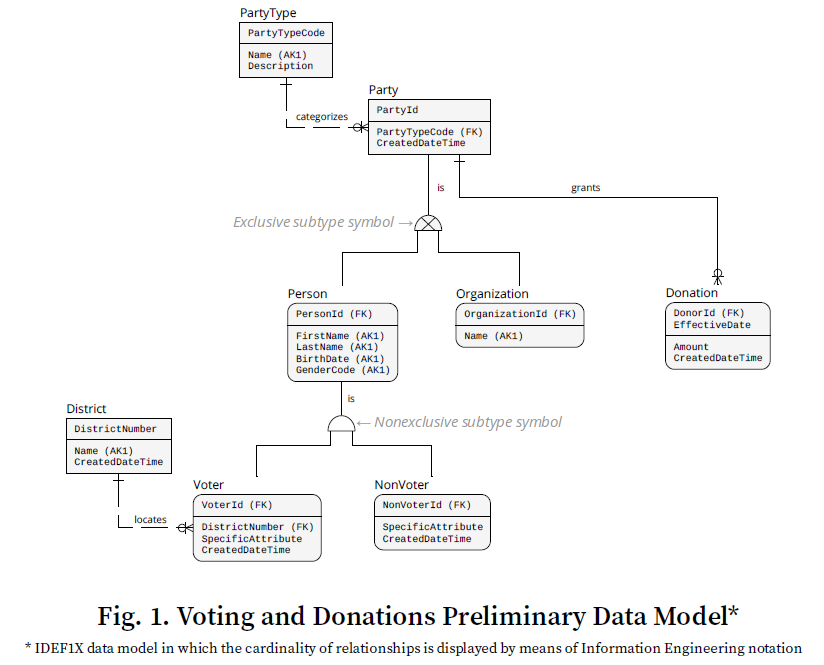 As you can see, the incorporation of the Party entity as an exclusive supertype provides the possibility for a Person or an Organization to be able to grant Donations, since the PartyId attribute migrates[3] from Party to Donation, but I have assigned a role name[4] (i.e., DonorId) to such attribute in order to make it more meaningful in the context of the Donation entity.

In the same way, PartyId migrates to Person as PersonId, and to Organization as OrganizationId, and these two entities, in turn, can hold their specific attributes.

I consider that, in your business context, a given Person can be a Voter and a NonVoter over time, depending on the particular District in which said Person is located, thus I have temporarily depicted this circumstances in a nonexclusive supertype cluster, but I consider that we need to clarify some points in this respect.

The goal of this data modeling excersise is to capture the things of interest with respect to your business context requirements, and one can serve that purpose by determining the entities involved along with their respective attributes (including, with especial attention, the ones that uniquely identify each entity ocurrence) and the way in which such entities are interconected. In this manner, the semantic value that said aspects hold for you, and your data users, is paramount. The better these factors are comprehended, the better they can be depicted in a data model.

Having said that, I have created three more models (also preliminary) in order to have a vehicule to exemplify some ideas about your scenario. They are contained in this PDF, which you can download from Dropbox.

Then, here are the concrete aspects that need clarification:

Response to your comments

I have never heard of type-subtype relationships in a database. This is very interesting.

Yes —as far as I know— Type-Subtype relationships were introduced, as such, in the relational paradigm back in 1979[5] and, unfortunately, they are not widely used in common implementations. But now that we know them, we can take advantage of this interesting and powerful structure in your scenario.

I am not all that practiced with databases so not sure how to begin implementing the columns needed. All of my INSERTS are straightforward single table inserts and it looks like this approach will require some fancier queries. I'm definitely willing to learn, though.

Do not worry, it is completely understandable that you are familiar with other computer science branches but not that much with relational databases, and I consider that this is a good oportunity for you to know more about this fascinating discipline, we all learn new things every day.

Yes, INSERTing a row (or set of rows) in a database table implies different considerations than, say, creating a record or file in a programming language.

We need first to focus in obtaining a stable logical data model, then we will easily derive a physical model (DDL statements or “CREATE Table code”). Once we have a clear target (all the aforementioned) defined, I will be glad to offer some ideas and guidance in relation to your INSERTs implementation and other pertaining elements.

1. Party is a term used in legal contexts to refer to a single person or group of persons that compose an individual entity.

2. Integration Definition for Information Modeling (IDEF1X) is a highly recommendable data modeling technique that was defined as a standard in december 1993 by the United States National Institute of Standards and Technology (NIST).

3. IDEF1X defines key migration as “The modeling process of placing the primary key of a parent or generic entity (or supertype) in its child or category entity (or subtype) as a foreign key”.

4. The use of role names is recommended since 1970 by Dr. E. F. Codd in his seminal paper entitled “A Relational Model of Data for Large Shared Data Banks”. For its part, IDEF1X —keeping fidelity regards relational practices— also advocates role naming.

5. By Dr. Codd (as one would expect) in his work entitled “Extending the Database Relational Model to Capture More Meaning”.

Great question! Here is an approach using super/sub-typing in the barker-ellis notation style. In this approach super and sub-types are used only for classifying based upon a single, un-changing, fundamental characteristic possessed by all the entities of a given entity type. This is similar to the taxonomy of biological organisms. Using this style, we only sub-type based on who you are, not on the role you play. 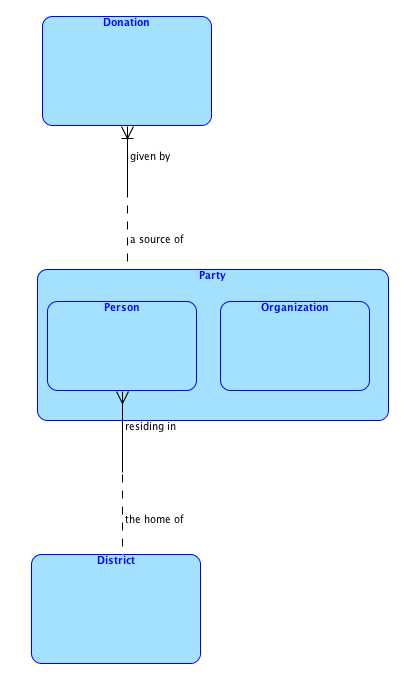 With respect to voting, it may seem to make sense to sub-type the Person based on if they are a voter or non voter. But being a voter or a non voter has nothing whatever to do with who the person is. Instead, it has everything to do with the district in which they live. Therefore, we model a district entity type which may be the home of one or more persons. Likewise, a person must be residing in one and only one district.

This approach solves the need to know who have made donations and the need to know who is and who is not a voter via naturally occurring information - where the person resides - instead of information we invented by declaring them a voter or a non voter - or both. With respect to a person being both a voter or non-voter, that is mis-leading. They could be both over time, but could never be both at a moment in time. Therefore you must decide if you care about the history of their residence or not. If you do, then you would instead create an entity type - say residence - to associate the person to the district in which they reside for the period of time they resided there. I suspect you don't care however, and thus you would simply update the person's information to show their new district. Either way, the approach is more intuitive than using sub-typing. This is why I prefer the barker-ellis approach of limiting super and sub-typing to only fundamental classifications.

There are two approaches to this. First, you could simply include those attributes for the person and leave them missing. In mySQL you would make the columns NULLABLE. That approach is simple, but if you ever want to write a query where you use one of those attributes as a predicate you now have to deal with the complexities of three value logic (3VL), and the fact that SQL does not implement its 3VL consistently. If instead you want to avoid 3VL, you can use specialization to create an additional entity type to hold the extra information only when it is known. A row is placed there only for those persons for whom you've collected the data. Now this doesn't avoid NULLs altogether as you must deal with outer joins, but you can avoid nulls if you chose to via coalesce.

Instead, I would call the table something slightly different like voter profile. This denotes the information pertains to the person as a voter, and that information absolutely describes additional things about them regardless of whether or not they live in your district.

I hope this approach gives you some additional food for though. To learn more about the barker-ellis approach to business modeling you can check out David Hay's Enterprise Model Patterns, and also Richard Barker's CASE*Method Entity Relationship Modelling. With respect to missing information, I would recommend you check out Fabian Pascal's paper "The Final Null in the Coffin," part of his excellent Practical Database Foundation Series, and also Date and Darwen's The Third Manifesto site where they have some great resources on various approaches to handling missing information without nulls.

13
Modeling a scenario in which each Music Artist is either a Group or a Solo Performer
21
Database design: Two 1 to many relationships to the same table
3
Relational tables with same content, custom solution

3
How to design relationships for variant data?
1
Referencing multiple tables from a single table and store additional data
13
Proper way to store a value that could be multiple different types
2
How to join to a single list of IDs from two different tables
22
Best design to reference multiple tables from single column?
0
Design problem with placing proper constrains
1
Modelling users and groups - but with multiple types of groups
9
Developing a database for a funds transfers business where (a) people and organizations can (b) send and receive money
2
Dealing with different types in a fact table
0
Avoiding a many-to-many relationship cycle between 3 tables