Elements inside a container: How to perform atomic operations on them?

In my DB (Postgres 9.4) I have the following items: Tshirts, Jeans, Shoes and Boxes. 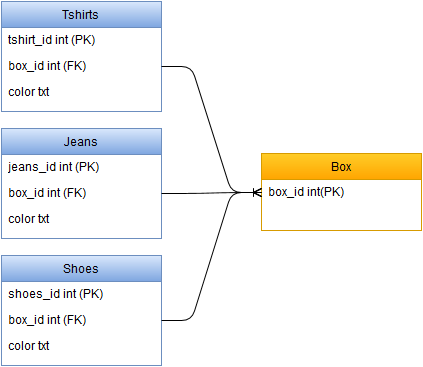 To check (and also to ensure) the last condition I use a trigger.

This code will fail because of the trigger.

The only way I can change the color of each item in the box is:

Is there any way (through modeling or triggers) to avoid this tricky situation? It would be great if I could change the elements' color atomically.

Thank in advance and sorry for my bad english.

I'd suggest adjusting your model and doing away with the trigger altogether. While the example is somewhat mind-bending, your data model contains a duplicated dependency which serves as the root of your update anomaly problem.

The existing trigger is actually attempting to compensate for a potential update anomaly a 3NF+ data model would mitigate. If the color of a T-shirt is known at creation time, such a T-shirt could ( and likely should ) be immediately added to a box of the same color. In this way, the need to change the color of all items in a box is performed by merely updating the color attribute of the box itself.

Also, unless there's good reasons to split T-shirt, Jeans and Shoes into their own tables, it might be very much preferable to just consolidate those to an Element table with and ElementType lookup attribute, but much like @dezso, I suspect this is not even kind of really about t-shirt, jean and shoe colors as they are arranged in various boxes.

The specific problem of having the trigger consider a group of related changes rather than independant updates could be solved by :

Still, concurrent transactions should be blocked by the program to work on the same "boxes", otherwise a trigger-based check could let incoherencies pass. This is because the trigger can't see the potential changes of other sessions that would not have yet committed when it runs.

Not the answer you're looking for? Browse other questions tagged postgresql database-design trigger transaction or ask your own question.

1
Database atomic operations implementation
1
Database design: nested tagging
1
Postgres : Executing SELECT within a transaction does not return most recent rows
0
Schema design for storing item combination with order
5
Aggregate discarding values in one column that haven't a match in another column
0
How to commit transaction on an after update event trigger?
2
Schema For “Other - Add Comment”
0
A trigger making a timestamp of when another column was changed
0
Trigger based on linked table