I am then attemtpting to verify my transaction log as follows: 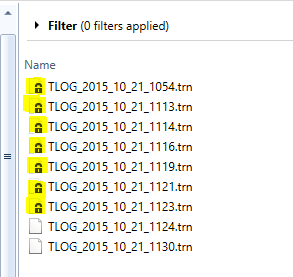 I can manually break the lease using Azure Management Studio but am I doing something wrong with RESTORE VERIFYONLY that is leaving an active lease on the file?

This seems very similar to:

From that Microsoft Support article:

Assume that you use the RESTORE HEADERONLY or RESTORE FILELISTONLY command to restore a database from Windows Azure Blob storage service in Microsoft SQL Server 2014 or SQL Server 2012. After the command is completed, you cannot remove the backup file.

The issue occurs because there is an infinite lease on the backup file. Some race conditions between internal threads cause the lease to be not released in some cases.

This is marked as first fixed in Cumulative Update 4 for SQL Server 2012 SP2. While the fix does not mention RESTORE VERIFYONLY explicitly, you should definitely check this out before reporting it as a bug.

The latest Service Pack for SQL Server 2012 at the time of writing is SP3, which will also include the fix mentioned above.

Finally, just to document something GregGalloway originally left in a comment on the question, you can remove active leases using a script in the following MSDN article:

Not the answer you're looking for? Browse other questions tagged sql-server sql-server-2012 backup restore or ask your own question.