I'm an A-level Computer Science student, and my teacher can't explain how to get me from UNF to 1NF. I've researched a little, but I'm not sure as to whether this table (below) is in 1NF or not. I've left the UNF format for you with what I think is the 1NF.

What I think is 1NF 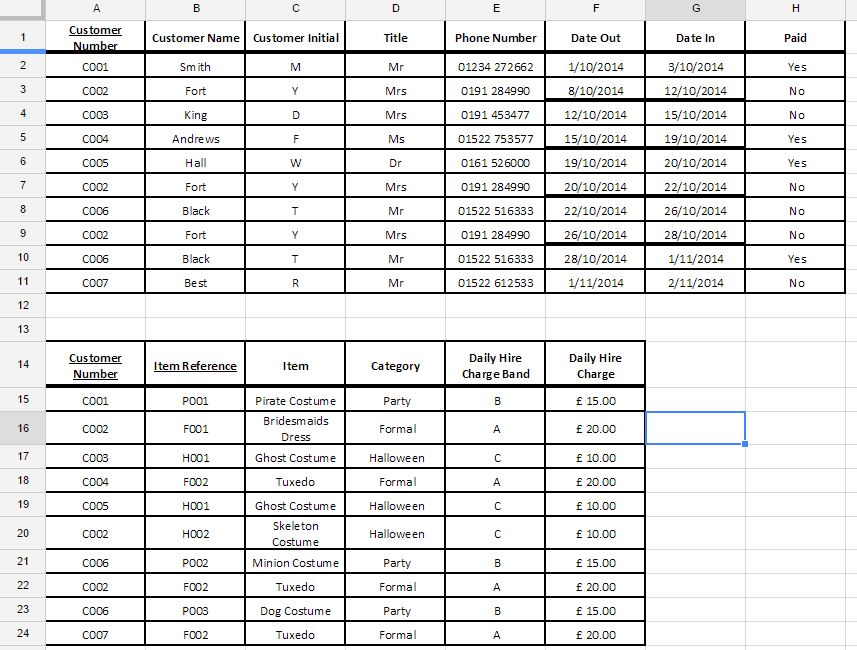 I think you need to reconsider whether the payment for the dates is done on the hire (or rather the transaction) or the customer.

When thinking about normalization you need to think in terms of properties of an entity rather than something abstract so I want you to think if day in and out, and the paid column are really a property of the customer rather than the transaction (I guess the price of the transaction is a giveaway).

I think, if you think about it that way (entities-properties) you will feel naturally that the price and the dates and the paid go together with the renting transaction rather than the customer. (possibly needing a date for the transaction in the case of returning customers, but that isn't included in your original table)

You might also want to reconsider storing the item name on the transaction instead of just the item number. Items could be a table in itself.

It's usually not abstract theory but what you feel as properties of an object that is right. It's not that much different from class/object design in programming.

Fabian Pascal recently blogged on the definition of first normal form. Also, his Practical Database Foundation Series includes a treatment of normalization and 1NF. If one purchases the entire series two additional papers are included that specifically address what is and what is not 1NF, the former paper written by CJ Date. I will make an attempt to summarize the key points with regard to your question.

For a table to be in 1NF, and thus be a relational table (R-table), certain rules must be followed in its design and population to ensure the table can acquire the properties of a mathematical relation. The rules summarized are:

Regarding rule one, a mathematical relation by definition has unique tuples but when adapted for use in data management Codd added a key to serve as a unique identifier for each row as in the real world entity types are identified by one or more of their characteristics (attributes). Note there can by more than one candidate key so I just use the word key here.

Regarding rule four, Codd initially intended that no column could contain a relational valued domain (RVD). It was later shown that RVDs do not violate the relational model and instead any domain of any complexity, including another relational variable, could be contained in the column of an R-Table so long as that column contained only one value.

The table you have shown in the question and labeled as UNF format is not in 1NF as it violates a portion of the first rule - distinct rows - if I interpret the diagram correctly that Customer Number is the key based on the single underline under its name. There are three rows with customer number C002.

5
database schema design for school system
1
UNF to 3NF is this relation workable?
0
Attempting to identify transitive dependency
2
Survey Database - Respondent Table (1NF or 3NF - Pros and Cons)
0
Normalisation to 3NF
2
Help with Normalisation
0
Should "Teachers" and "Students" be kept in a common "Person" table?