Why is the optimizer doing a table scan vs Index Seek

Probably a straight forward answer, but I'm too bleary eyed to see it.

Have a simple query that is pulling the top 100 rows based on a char column.

The optimizer thinks a table scan is more efficient than running an index scan.

This will take > 30 seconds to return since the optimizer chooses a table scan vs using the index seek. An index scan is < 1 sec.

Interestingly if a symbol is added in the where

It will use the index.

Add in a dot or space, it uses an index scan. 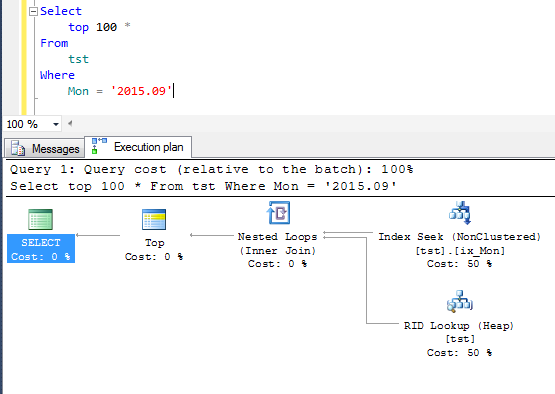 Can someone explain to me why the optimizer is choosing a table scan vs using the index?

Edit: Thanks all for the excellent feedback and information. I didn't know about traceflag 9130 and from that I can see the estimated rows are a lot less than the actual rows which is likely why the optimizer is choosing the table scan vs the index.

Here is the Statistics Output: Without index hint:

The optimizer is convinced that if it's going to have to go back to the disk for retrieving column data anyway, it might as well scan the table in the first place, since that'll be less work for it to do. It'll use the seek with the CHAR( 7 ) scalar because the statistics for the index know it's not going to find anything, but if data needs to be returned, it has to consider both CPU and I/O weights.

Specifying the hint, in both cases, does reduce the time required for the query to resolve, but the index seek + RID lookup actually results in a significant increase in the number of reads necessary ( my test indicated a 60% increase ). Obviously it's not a 1:1 trade off, since the time difference is about 6x, but regardless, the optimizer is choosing the scan instead.

If you can INCLUDE the columns you need in the index, you'll get the best of both worlds, eliminating the RID lookup and the additional reads.

Not the answer you're looking for? Browse other questions tagged sql-server index-tuning or ask your own question.

3
Scan Count of a query increased from 1 to 2,226 after creating a non-clustered index
18
Multi-statement TVF vs Inline TVF Performance
5
Clustered Index Scan when using greater than in WHERE clause
2
Does IMAGE column affect query performance even if it's not included in the query?
4
Aggregation in Outer Apply vs Left Join vs Derived table
0
Update using NonClustered index results in large number of logical reads?
12
logical reads on global temp table, but not on session-level temp table
1
SQL Server estimating badly