I'm on a new company, and the first thing I saw is that they don't even know how many instances they have. they don't have passwords and the old DBA had no Idea what he was doing.

long story short, I could manage to create my own sysadmin account in almost every server ( I will move all databases to only 1 or 2 instances ) but there are some that I just can't.

In this Link by mssqltips there is a tool called PsExec. Following the tutorial I could run the program and connect to SQL Server with NT AUTHORITY\SYSTEM. But it's not working. NT AUTHORITY\SYSTEM is Public and I can't add my account with sysadmin. Does this program runs only with SQL 2008?

There's no way to stop servers because our databases aew running for all over Brazil.

How to add sysadmin to user in SQL Server 2008 when no sysadmin accounts exist ( This one says about the program, but as I said, it's not working for me (he is using 2008 )). 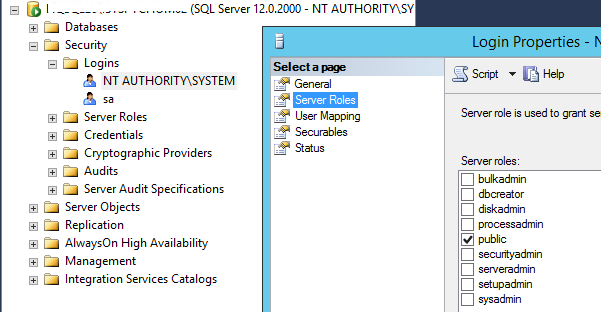 In this video he's using the -M method. Does someone already tested it on SQL Server 2014? I would like to know and, I will try.

I can connect with the NT AUTHORITY\SYSTEM user but when I try to create a sysadmin login or change sa password, it says I have no rights to do that. And then, looking at the nt rights, it's public. I could change the sa login with the -m trick on my machine, but I would like something that does not require to shutdown the SQL.

Here is a technet article that has the detailed steps.

In a nutshell you need to start SQL server in single user mode and connect using sqlcmd to add your account. This should get you what you need as long as you have admin rights at the OS level.

One note is that if the sqlagent is configured to start up automatically you should disable that before you start SQL server in single user mode so the connection isn't taken by the sqlagent.

As far as I am aware, there is not way to do this without some downtime for the SQL Server. If there are no known sysadmin users on the server, you will have to take it down for at least a few minutes.

(I believe that the psexec method mentioned in the question body worked on older versions of SQL Server, but as the OP discovered, at least as of SQL Server 2014, even NT AUTHORITY\SYSTEM is not a sysadmin.)

If the -m method you mention in the body - which does require restarting SQL server - will work for you, the technet article linked by @Aaron may be exactly what you need. However, you will run into trouble if Mixed Mode Authentication is not enabled - if it isn't, SQL Sever will refuse to authenticate the SQL login you just created.

The following method will grant a Windows user sysadmin privileges on the SQL Server, which will allow you to connect with Mixed Mode Authentication turned off. It worked for me on SQL Server 2014 just now. Like the method mentioned on technet, it does require local administrator access to the Windows server.

Not the answer you're looking for? Browse other questions tagged sql-server sql-server-2014 permissions security or ask your own question.

25
Why is it a bad practice to allow everyone to use the sa login?
2
What could trigger that a login created from a certificate is not visible in metadata
5
BUILTIN\Administrators accidently removed
3
How does SQL Server handle logins when the user is a part of multiple groups with various privileges?
4
Sql Server Agent is part of the sysadmin role even tough Sql Server says it's not
1
Permissions for Cluster service account in SQL server
2
Error: 18456, Severity: 14, State: 46
2
Granting [NT AUTHORITY\SYSTEM] sysadmin on SQL server - Compliance/Best Practice