I've written an application with a SQL Server backend that collects and stores and extremely large amount of records. I've calculated that, at the peak, the average amount of records is somewhere in the avenue of 3-4 billion per day (20 hours of operation).

My original solution (before I'd done the actual calculation of the data) was to have my application inserting records into the same table that is queried by my clients. That crashed and burned fairly quickly, obviously, because it's impossible to query a table that's having that many records inserted.

My second solution was to use 2 databases, one for data received by the application and one for client-ready data.

Both databases have the same set of 5 tables with the same schema, except the staging database which has the jobs table. The staging database has no integrity constraints, key, indexes etc... on the table where the bulk of records will reside. Shown below, the table name is SignalValues_staging. The goal was to have my application slam the data into SQL Server as quickly as possible. The workflow of creating tables on the fly so they can easily be migrated works pretty well.

The following is the 5 relevant tables from my staging database, plus my jobs table: 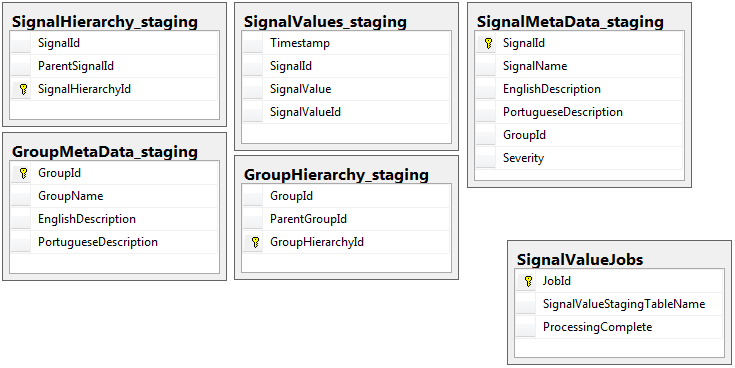 I use sp_executesql because the table names for the staging tables come as text from the records in the jobs table.

This stored procedure runs every 2 seconds using the trick I learned from this dba.stackexchange.com post.

The problem I cannot for the life of me resolve is the speed at which the inserts into production are performed. My application creates temporary staging tables and fills them with records incredibly quickly. The insert into production cannot keep up with the amount of tables and eventually there's a surplus of tables into the thousands. The only way I've ever been able to keep up with the incoming data is to remove all keys, indexes, constraints etc... on the production SignalValues table. The problem I then face is that the table ends up with so many records it becomes impossible to query.

I've tried partitioning the table using the [Timestamp] as a partitioning column to no avail. Any form of indexing at all slows the inserts so much that they can't keep up. In addition, I'd need to create thousands of partitions (one every minute? hour?) years in advance. I couldn't figure out how to create them on the fly

I tried creating partitioning by adding a computed column to the table called TimestampMinute whose value was, on INSERT, DATEPART(MINUTE, GETUTCDATE()). Still too slow.

I've tried making it a Memory-Optimized Table as per this Microsoft article. Maybe I don't understand how to do it, but the MOT made the inserts slower somehow.

I've checked the Execution Plan of the stored procedure and found that (I think?) the most intensive operation is

To me this doesn't make sense: I've added wall-clock logging to the stored procedure that proved otherwise.

In terms of time-logging, that particular statement above executes in ~300ms on 100k records.

How can I make this faster? Can SQL Server handle into the billions of records per day?

I forgot to include hardware in the first pass of this question. My bad.

I'll preface this with these statements: I know I am losing some performance because of my hardware configuration. I've tried many times but because of budget, C-Level, the alignment of the planets, etc... there's nothing I can do to get a better setup unfortunately. The server is running on a virtual machine and I can't even increase the memory because we simply don't have any more. 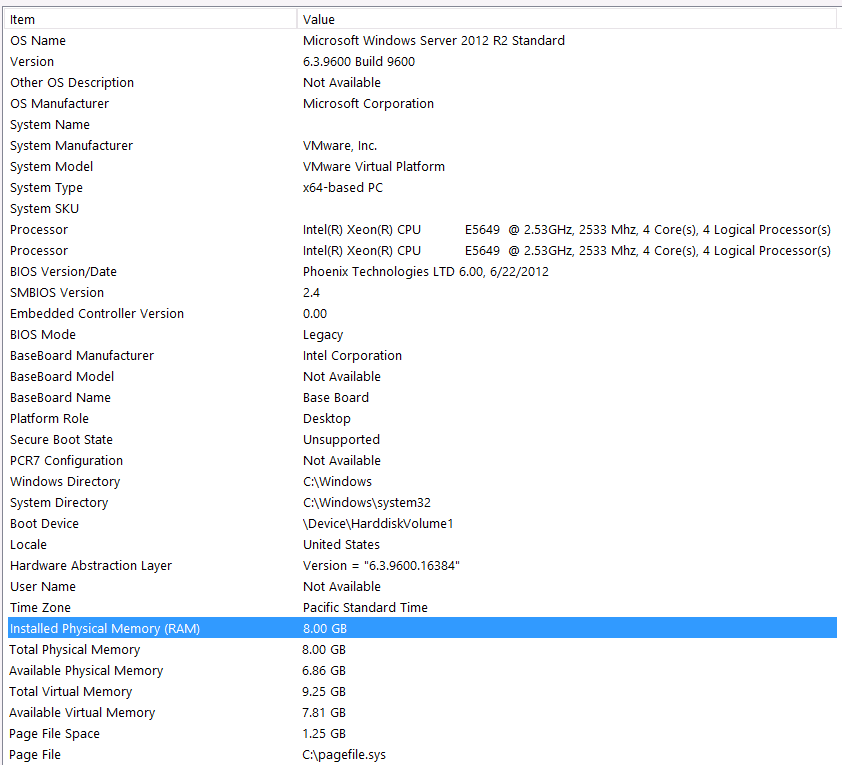 The storage is attached to the VM server via iSCSI interface to a NAS box (This will degrade performance). The NAS box has 4 drives in a RAID 10 configuration. They're 4TB WD WD4000FYYZ spinning disk drives with 6GB/s SATA interface. The server only has one data-store configured so tempdb and my database are on the same datastore.

Max DOP is zero. Should I change this to a constant value or just let SQL Server handle it? I read up on RCSI: Am I correct in assuming that the only benefit from RCSI comes with row updates? There will never be updates to any of these particular records, they'll be INSERTed and SELECTed. Will RCSI still benefit me?

My tempdb is 8mb. Based on the answer below from jyao, I changed the #sValues to a regular table to avoid tempdb altogether. Performance was about the same though. I will try increasing the size and growth of tempdb, but given that the size of #sValues will more or less always be the same size I don't anticipate much gain. 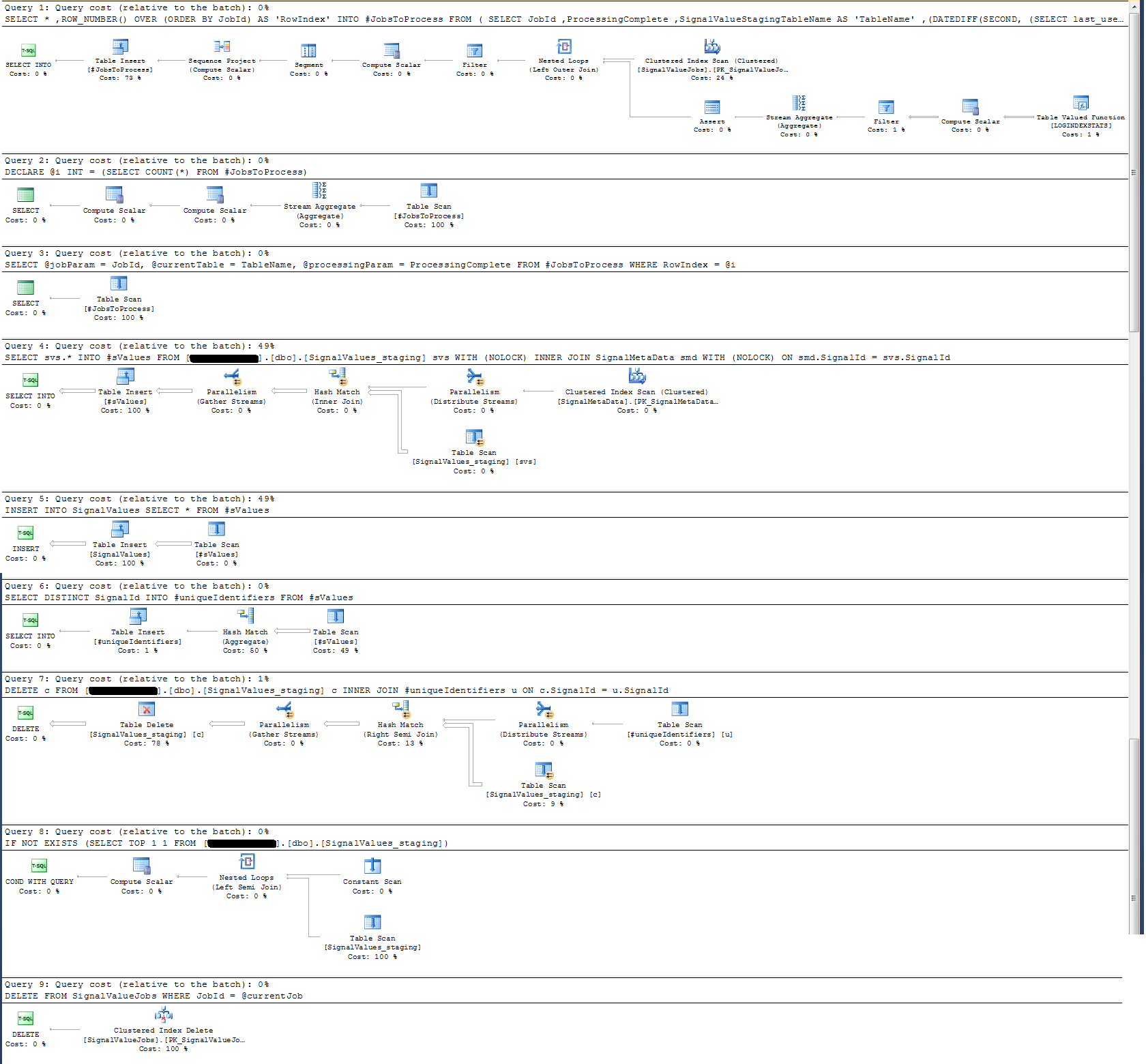 I've calculated that, at the peak, the average amount of records is somewhere in the avenue of 3-4 billion per day (20 hours of operation).

From your screenshot, you ONLY have 8GB memory total RAM and 6 GB allocated to SQL Server. This is way tooo low for what you are trying to achieve.

I suggest you to upgrade the memory to a higher value - 256GB and bump up your VM CPUs as well.

You need to invest in hardware at this point for your workload.

My tempdb is 8mb.

Based on your edit .. you should have a sensible tempdb - preferably multiple tempdb data files equally sized along with TF 1117 and 1118 enabled instance wide.

I would suggest you to get a professional health check and start from there.

General advice for such problems with big-data, when facing a wall and nothing works:

One egg is going to be cooked 5 minutes about. 10 eggs will be cooked in same time if enough electricity and water.

Or, in other words:

First, look at the hardware; second, separate the process logic (data remodeling) and do it in parallel.

I will do the following check / optimization:

Good luck and love your question.

Not the answer you're looking for? Browse other questions tagged sql-server performance sql-server-2014 query-performance or ask your own question.

9
How to schedule jobs in Sql server 2008 for less than 10 sec?
4
Make queries and BCP faster on a very large table