I have a customer running SQL Server 2012 Express Edition:

The server is 64-bit, running Windows 7, and they have 8GB of RAM. The page file is configured to be managed by the OS. 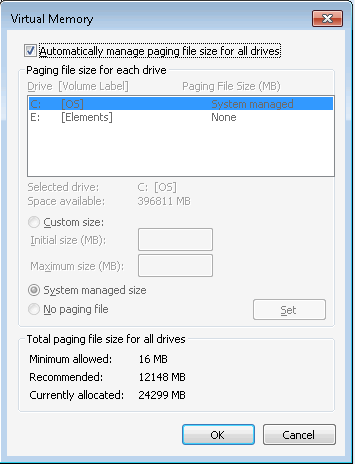 The other day, they began noticing "low virtual memory condition" entries in the Windows Event Viewer such as the following:

I logged in and took a look at the Windows Resource Monitor and noticed that the Commit (KB) counter for the sqlservr.exe process was "high" while the working set was relatively "low": 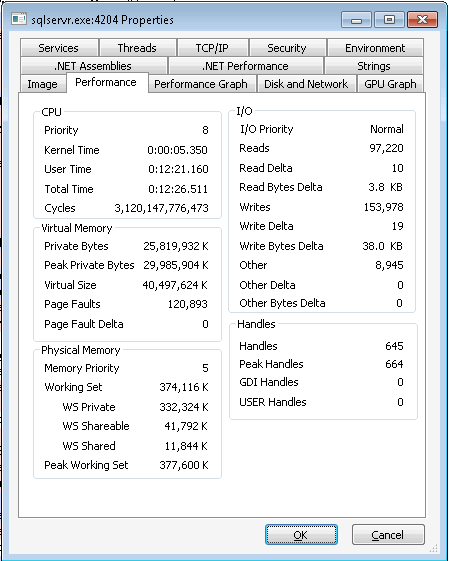 Based on the documentation for Commit (KB):

This is the total amount of physical and virtual memory (page file) that is committed to this specific process.

I also monitored Perfmon's Available MBytes counter and it consistently reads an average around 4.624 GB.

select * from sys.dm_os_process_memory returned this following: 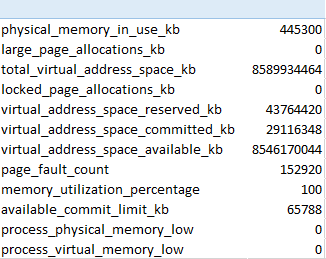 Why would sqlservr.exe be using so much "virtual" memory when there's still plenty of "physical" memory available? Also, I thought SQL Server 2012 Express was limited to 1GB of memory - is that just a physical memory limit?

On a side note, a number of web links mentioned that McAfee Virus Scan Enterprise/McAfee Host Intrusion Prevention could cause this type of behavior. Both were installed by on this server by their IT group. I attempted to add the appropriate exclusions but never saw the Commit (KB) drop. How could I prove it's a McAfee issue?

UPDATE: I found what seems to be a similar issue with McAfee Host Intrusion Prevention and SQL Server on the same box.

This is general message saying their is low virtual memory condition.

Why would sqlservr.exe be using so much virtual memory?

Their can be quite a few reasons for such messages.

In the error message I can see w3wp.exe which means application is also running on same machine in such case its quite possible windows would face low memory condition. What is total RAM present on the system ?. Since you have multiple appplications running make sure you have enough RAM on system

I thought SQL Server 2012 Express was limited to 1GB of memory - is that just a physical memory limit?

Aaron already pointed out and I am going to emphasize on that, starting from SQL Server 2012 the SQL Server express database engine can consume more than 1G of memory. The BOL information is not updated one it still says memory is limited to 1 G which is incorrect. As per this support article

Starting with SQL Server 2012, these memory limits are enforced only for the database cache (buffer pool). The rest of the caches in the SQL Server memory manager can use much more memory than is specified by these edition limits. For example, a SQL Server 2012 Express edition can use only a maximum size of 1.4 GB for its database cache. Other caches (such as the procedure cache, the metadata cache, and so on) can consume memory up to the size specified by the "max server memory" configuration.

EDIT: From the output of DMV sys.dm_os_process_memory.

This is physical memory used by SQL Server instance. This is memory backed by physical RAM