I am working in a DB diagram and I have a table called cm_identifier_type. Each record of this table can have or not a downloadable file (saved a file path). I have identified two possibles ways to achieve this. 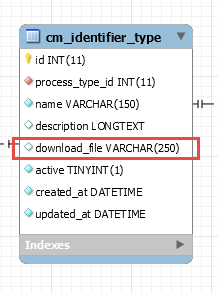 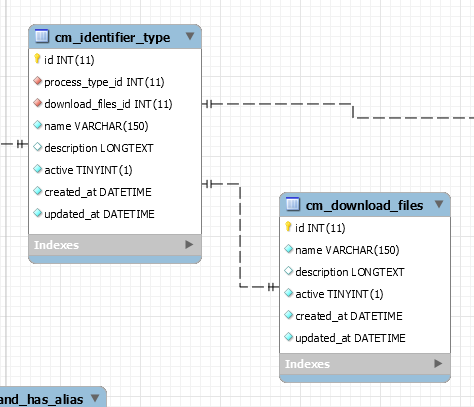 Now, regarding performance, disk space savings, query savings and so on, how would you do that? What is your recommendation on this edge case?

Note: for the moment I am using MariaDB 10.1.x but this will be in a MySQL instance, probably 5.x or so I am not sure at all since I didn't got those details yet

If you have a lot of specific statistics about how often your optional columns will be null and how often the non-null columns need to be read (as opposed to your core, mandatory columns) then you could calculate space savings (or not) and at the very least you could derive some performance experiments to test each approach.

There is no rule of thumb for whether it is "better" to segregate optional columns into a separate table.

"Better" is a subjective term. What is of value? Disk space, CPU cycles, query response times, simplicity of code? You can't consider the relative merits of one approach over another without first considering what it is that you're trying to optimize.

There are a lot of reasons why you might want to move optional columns to a separate 1:1 related sub-table. See my answer to this question for more discussion of these reasons.

In your case, since you're concerned about space, you need to keep in mind a few things about how data is physically stored:

There are a lot of competing influences on the matter of which takes less space and which performs better. You need to consider:

Another thing to consider, perhaps even the most important thing to consider, is whether you are overthinking the issue by trying to pre-optimize. Disk is pretty cheap. CPU is pretty cheap. Programmers are expensive. Unless you need to be concerned about massive scale, maybe the best answer is the one that leaves you with the simplest (least buggy, easiest to maintain) code.

I think the best option is the first solution, since the field is a VARCHAR: this means that no significant amount of space is occupied if the value is NULL.

On the other hand, with the second solution you have a table more to maintain, other indexes, need to join if you need the value, etc. Too much hassle for a problem that can be solved in a very simple way.

Not the answer you're looking for? Browse other questions tagged mysql database-design performance mariadb query-performance or ask your own question.

2
One to at most one relation or multiple null columns?

0
Looking for performance improvements for this query
4
Possible causes that a MySQL/MariaDB query is slow under some table conditions
0
Need some clarification of another post's method for restoring database with frm and ibd files
0
Ideal configuration and structure for single db + single table + 20 million static records
1
Does freeing up disk space improve the performance of MySQL?
1
Slow MariaDB Load of MySQL Dump
0
What's the best way to migrate from mariadb to mysql on ubuntu 18.04