In SQL Server 2012 Standard edition, I know that the max number of user connections is 32,767. What should I do as a DBA if I am heading towards this number?

Currently there are 30,000 user connections, and this number is expected to increase. 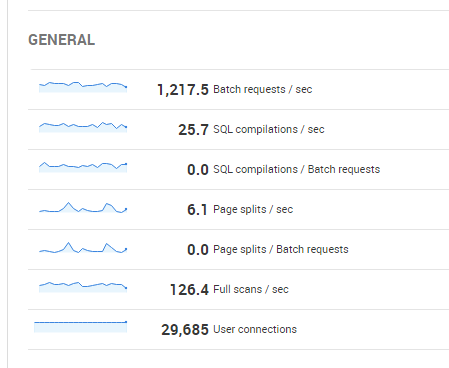 The maximum number of connections across SQL Server versions and editions is 32,767.

You can determine how many connections SQL Server currently has by looking at:

If you are feeling particularly rabid, and need to get rid of all the connections that haven't performed anything recently (regardless of if they are actually currently performing work), you can run the following code, which will generate a list of sessions that can be killed. You'd need to copy-and-paste the generated commands into a new SSMS window to actually run the commands. I'd also recommend having your résumé up-to-date just in case.

It is possible to linearly scale the number of connections beyond 32,767 by sharding the data across multiple SQL Server nodes. However, in my opinion, using sharding as a way to get around the limit on the number of connections is similar to using an atom bomb to kill a spider. It will kill the spider, but you just might have bigger problems at the end of the day. Not to mention it's pretty darn hard to build an atom bomb, not to mention implement sharding properly.

I've run into strange behavior with connection pooling in the past, and your scenario aligns well with one of those situations. If your application is using connection pooling (and that's still speculation, at this point, until you confirm or deny that) then you're going to have many connections that remain open. This is by design.

This is an oversimplification, but the salient points include:

Here's the reference material that I used to come to these conclusions.

The case of orphaned transaction

Not the answer you're looking for? Browse other questions tagged sql-server sql-server-2012 connections max-connections or ask your own question.