Unblock your team by capturing collective knowledge that anyone can find.

“If there is one thing developers like less than writing documentation, it’s responding to unnecessary escalations […] and too many escalations wear down the developers.”

“We needed a better place to store all the questions and answers that people were repeatedly asking, and we discovered Stack Overflow for Teams.”

“We use Stack Overflow for Teams internally when onboarding new developers, and when new developers ask questions, everyone can benefit from the shared knowledge.”

Below is an example pgpool architecture: 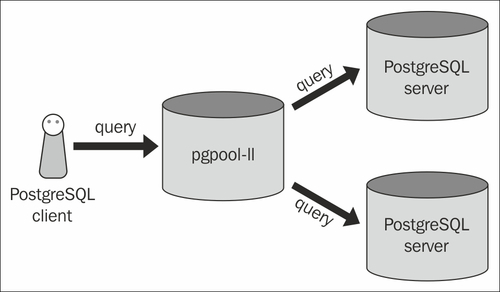 This implies that you only need to have pgpool on a single server; is this true? When I look at the configuration I also see that you configure backends within pgpool.conf; so it further implies this. But, it doesn't explain why I see pgpool on backend servers also.

When looking over the documentation I also see:

If you are using PostgreSQL 8.0 or later, installing pgpool_regclass function on all PostgreSQL to be accessed by pgpool-II is strongly recommended, as it is used internally by pgpool-II.

So I'm not sure what to think; if it's best practice to have pgpool on all backends or just a dedicated server?

Generally you would not install Pgpool on the backend servers. What you see in your picture is the most common configuration. Pgpool is a standalone server which essentially sits in front of the databases. The two Postgres servers are often configured with streaming replication; with one being the master and the other the slave.

This allows Pgpool to load balance all read queries between the two (or more) databases. Any queries which involve any writes, will be routed to the master server which in turn replicates to the slave.

In either configuration, your application server thinks it is just connecting to a single Postgres database.

About pgpool_regclass, which should really be a separate question, this is from the Pgpool FAQ:

If you are using PostgreSQL 8.0 or later, installing pgpool_regclass function on all PostgreSQL to be accessed by pgpool-II is strongly recommended, as it is used internally by pgpool-II. Without this, handling of duplicate table names in different schema might cause trouble (temporary tables aren't a problem).

If you need this, it is just some SQL code run on your Postgres master server to add a function Pgpool uses.

With regclass, there is an additional step you have to do (I was thinking of insert_lock). If you are compiling from source (generally most distributions have really outdated versions of Pgpool), you will have to compile a Postgres library as well.

If you compiled from source, you will have to go into the .../pgpool-II-3.X.X/src/sql/pgpool-regclass folder and do a ./configure; make.

Copy the pgpool-regclass.so file into the Postgres extension directory. On my Ubuntu 14.04 server (just using the Postgres 9.3 package install), it is located at: /usr/lib/postgresql/9.3/lib. Remember to do this for all Postgres servers.

Once that is complete, then you can run pgpool-regclass.sql on the master. This just maps the pgpool_regclass function to the library you copied over.

As with everything else, there are many ways how you can accomplish your high availability deployment. Here I'll suggest something from my experience (my own HA implementation):

I hope it helped.

UPDATE: Thanks @Moshe Katz - the link did changed. Now updated here, in the original post also.

14
PostgreSQL failover and replication
11
PostgreSQL for high volume transactions and for Data warehousing
2
PGPool Frequent Queries
0
Postgres pgpool increase num_init_children
0
Connect Jira to Postgresql with Pgpool-II
2
Which databases can meet these replication requirements?
1
PGPool for Postgres load balancing, where to sit it
1
Connecting to Pgpool