I'm using a past exam paper for practice, can someone help me normalise this database to 2NF? I have uploaded a picture of the original below, and also my attempt at normalising it myself. I am certain I have gone wrong with the YEAR column, but can't be sure. 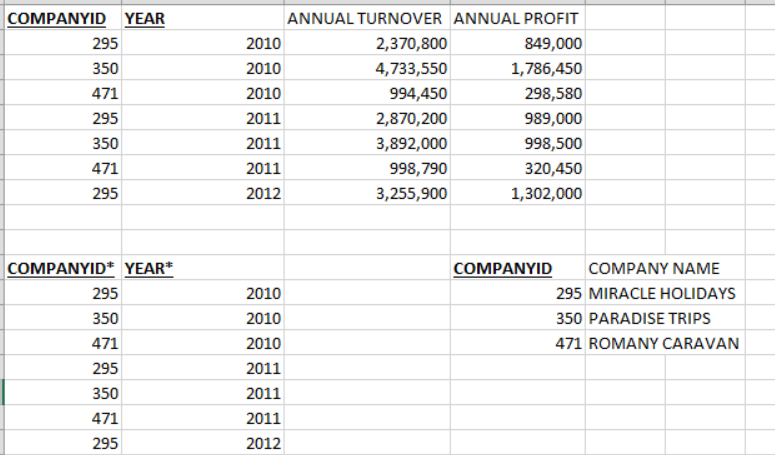 You have the right idea and have just gone a little wrong with the year column.

The table given shows that Company Id + Year is the key to the table - meaning that each row must have a unique combination of the value of these two columns. This is indicated by the solid line under these two columns. A table is normalized when that table is a faithful representation of a relation. To approximate a relation, the table must:

In looking at the table in the exercise these conditions are met. Once a table is normalized, it can be further normalized as a way to eliminate certain redundancies which occur due to functional dependencies between the columns. By functional dependency we simply mean that the value of one column always determines the value of the second. This is based on the mathematics of algebraic functions. For example, the value 2, when plugged into the algebraic function 2x + 3 will always yield 7. 2NF is defined to mean that each non-key column in the table is fully dependent on the entire key - thus no partial key functional dependencies.

Normalization is a very complex topic and I have glossed over many important concepts. CJ Date has written an entire book with respect to it called Database Design and Relational Theory: Normal Forms and all that Jazz. While definitive, it is hard to grasp all the formalisms. An excellent reference that presents the formalisms in language more easily understood by common practitioners is Fabian Pascal's Practical Database Foundation Series. Studying both of these references - first Fabian's and then Date's - will give you all the information you need to master normalization as a repair procedure.