I am designing a database where I have different products and suppliers. For example, I have a product, "mobile phone", say an Apple 5S. This will be sold through my website from different suppliers like Mapple, Mango.

I can not store the data for every single supplier as it will cause data redundancy. I have been considering the following columns for the products table:

We can see the Product name is repeated every time which caused data redundancy.

My main concern is how to avoid data redundancy? How to design the Product table?

Based on (a) some deliberations we had via comments and (b) the content of the question, we have defined the following characteristics of your business environment:

So, among other points, there is a many-to-many (M:N) association or relationship involving the entity types called Supplier and Product. This is a very basic —but, at the same time, quite powerful when modeled accurately— construct usually employed to shape some components of a database conceptual model.

Consequently, I created an expository IDEF1X1 diagram that consolidates the previously formulated business rules in a single graphical device, which is shown in Figure 1: 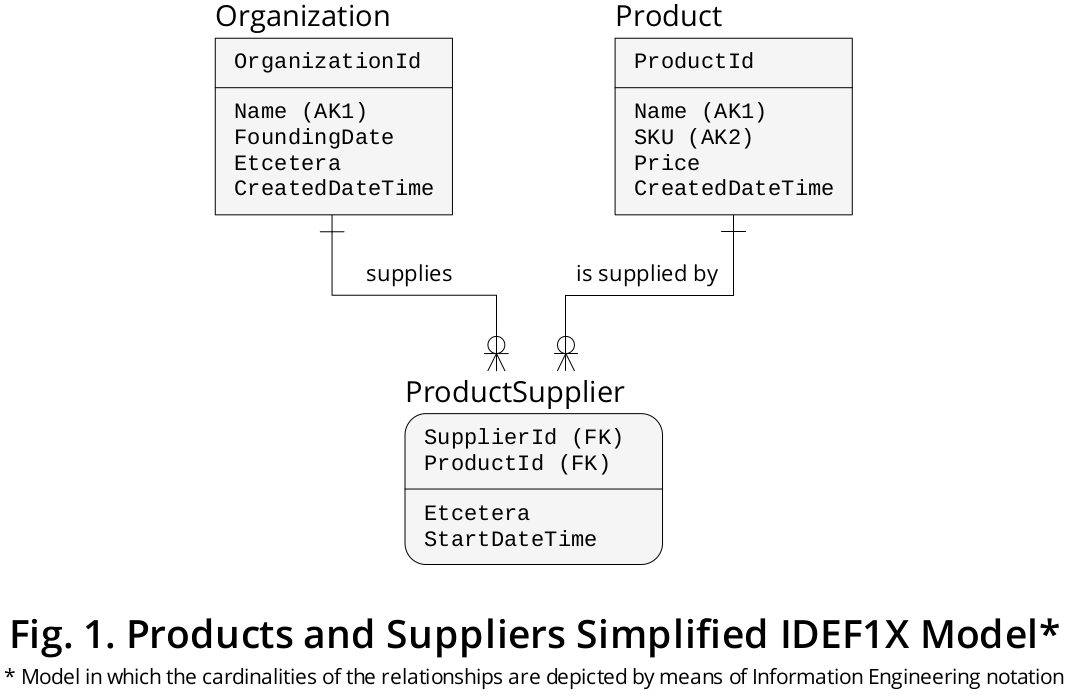 As you can see, ProductSupplier is the associative entity that portrays the M:N association that connects the Product and Organization.

Each ProductSupplier is uniquely identified by the combination of values of two distinct properties or attributes, i.e.,

so they are depicted as a composite PRIMARY KEY. These properties are FOREIGN KEY references to Organization and Product, respectively.

With this layout, I have arranged the properties that pertain to a each entity type in their appropriate place:

I wrote the DDL statements that follow based on the conceptual definitions discussed above, so that you can get a form a better idea about how to design this part of your database:

In this logical structure, as demonstrated:

All these factors help to prevent ambiguities that would have come about if multiple entity types are represented by way of a single table.

Successively, you can derive data from the three different base tables —e.g., by dint of JOINs— in order to take advantage of the logical structure and produce new tables that include information like shown in the pictures you included in the question.

In a database that is designed following the principles of the relational model, duplication of values contained in columns is not only acceptable but expected, while duplicate rows are strictly forbidden.

As for the logical structure expounded above, all the tables are constrained declaratively so as to prevent the INSERTion of duplicate rows, therefore the avoidance of this kind of harmful redundancy is well addressed.

Of course, one has to take into account the meaning carried by the table(s) and column(s) at issue.

I suggest that you take the time to test the tables I present in the previous logical structure so that you can determine if it meets each normal form.

1 Integration Definition for Information Modeling (IDEF1X) is a highly recommendable data modeling technique that was defined as a standard in december 1993 by the United States National Institute of Standards and Technology (NIST). It is solidly based on (a) theoretical work authored by the originator of the relational model, i.e., Dr. E. F. Codd; on (b) the entity-relationship view, developed by Dr. P. P. Chen; and also on (c) the Logical Database Design Technique, created by Robert G. Brown.

2 IDEF1X defines key migration as “The modeling process of placing the primary key of a parent or generic entity in its child or category entity as a foreign key”.

14
Designing a friendships database structure: Should I use a multivalued column?
16
Designing a database for a video game business domain with multiple many-to-many relationships

3
Designing a Products database: One Products table or many separated by vendor?
4
Splitting a table based on enum value
4
Optimum design / structure for product data database?
0
Using a many-to-many table with a one-to-many relation?
1
MySQL Double many-to-many on an Entity
3
Modelling the structure of a database involving products with multiple barcodes
0
Scaling out MySQL & Redundancy-Speed tradeoff?