In a one-to-one relationship, where should the foreign key be placed?

I am currently designing an ERD for a project management system. I am unable to choose between two workable solutions as the best solution as I wish to embrace the best standards.

The two entities that can access the system are the clients and employees. Since they have different information, I decided to treat them as different entities. I figured that it is best to have a single table for users of the system rather having the username and password fields be found in both tables of clients and employees. Plus, the constraints I have to follow:

Here are the following entities without relationship yet defined:

First of all, let me just say (as others have pointed out), that there is nothing wrong with having mutually-exclusive foreign keys!

Second, despite it's elegance and applicability to other scenarios, I don't think the superset solution posted by @Joel Brown is appropriate for your exact case. Although it makes it much easier to deal with sub-types of 'people' (entities, users, what-have-you), it doesn't sound like your project will ever expand beyond those two groups.

As I see it, there are three techniques you can employ here:

Each of these options (as you might imagine) has it's own strengths and weaknesses.

So what's the answer?

Well, Roles allow massive amounts of scalability, but this comes at the cost of modelable complexity. Due to their simplicity, you can have a thousand roles, but each role will tell you very little (since a role cannot have fields of it's own). Therefore, I would say roles are inappropriate for your project, as you need to model different things for employees versus users.

Sub-types (a.k.a. superset) might work for your project. However, the added difficulty in querying to determine a users type probably isn't worth the benefit for a system that will only ever have two types. Additionally, the case of an employee also being a customer would probably never happen. It would be pretty safe to assume someone working internally and for a customer (if such a thing were even permitted by all involved), would have a separate email/logon/identity/username for each of their roles (positions) and hence would just login on the appropriate account.

Your current design (with the double FK in users) both permits the modelling of the fields you need for each different type, and allows you to have the (desirable?) mutual exclusivity to prevent a user from being both a customer and an employee. It does however maintain the issue that it is difficult to know (from just a users id) which table to query for that user (i.e. is the user a customer or employee).

To solve that problem (if you particularly care), I would suggest adding a field to users to signify the type. This could literally be something like user_kind, with an enum(client,employee) type. If you want to get even fancier, you could extract both that field and user_type to a fourth table, which has an FK back to users and the same dual-FK (on user_type) to Clients and employees.

It is acceptable to have mutually exclusive attributes in a table. If you only have one pair of such attributes, this may be the most practical solution.

Have you also considered what happens if an employee also happens to be a customer? Is that important to your system or is that something that would be considered coincidental?

If you think its important to treat all users as a feature of one type of thing, then you need to implement the (something) which is currently missing from your table definitions. 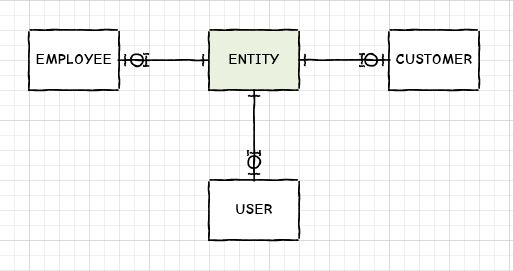 If you supply the missing superset entity, then every employee is one of these, as is every customer, and also therefore every user. The hard part of this is coming up with a reasonable name for this superset, but it solves the issue of having to figure out which foreign key to follow from user. It also makes a connection between employee and customer should one happen to exist, and should that connection be of interest.

It may be useful to view your case as two problems, rather than one. The first problem is a class-subclass (or, if you prefer, type-subtype) problem. Employees and Clients are clearly subclasses of some superclass that you have left unnamed. I'll call them Persons. (See the subtypes tag).

The second problem is the one-to-one relationship between Persons and Users. If you just had a Persons table, then the question of which way the foreign keys should go is driven by the fact that the relationship is mandatory at one end, but optional at the other end. If you put PersonID in the Users table, you won't have to use any NULLs here. Every user is a person.

Now back to the first problem, the class-subclass problem. For reasons that seem to make sense, you've chosen to have two separate tables, one for Employees and one for Clients. If you add the Persons table, as I've suggested, you may find it convenient to store some common attributes, like name and phone number, in the Persons table instead of in both of the subclass tables.

This technique has a name: it's called "class table inheritance" in the literature. You can search for it on the web, or over in SO.

There is a second technique, called "shared primary key" that can be useful in cases like this one. Using shared primary key, the Employees table and the Clients table do not have an independent ID field. Instead, the PersonID field is declared as the primary key to the Employees or Clients table, in addition to its role as an FK referencing the Persons table. This technique is common when implementing IS-A relationships.

This involves a little extra programming when you insert a new Employee or Client, but it may well be worth it.

Now, you can join the users table to the Persons table, or the Employees table, or the Clients table, as the situation requires. Only the category of users you want will appear in the joint result.

I've only quickly looked at this but my first thought is to utilise NULL attributes in your Users table for EmployeeId and ClientId. They can then be populated as required and defined as Foreign Keys.

UserName is the Primary Key for the Users table.

Use the UNIQUE attribute on the EmployeeId, ClientId and the composite EmployeeId+ClientId within the Users table.

This would address the "Employee is also a Client" issue in the Users table.

Not the answer you're looking for? Browse other questions tagged database-design table erd or ask your own question.

5
Entity Relationship Design; The best scenario
0
Foreign Key as Primary Key when "converting" conceptual entity-relationship elements to logical relations
0
What is the foreign key between two children in the same hierarchy?
1
What will be the relation between Employees and Players, given that some players are also Employees?
0
Can a foreign key be used for two primary keys?