I want to install Business Intelligence Development Studio for doing report development in Visual Studio 2010, however in my installation process, I cannot find BIDS in the feature selection. 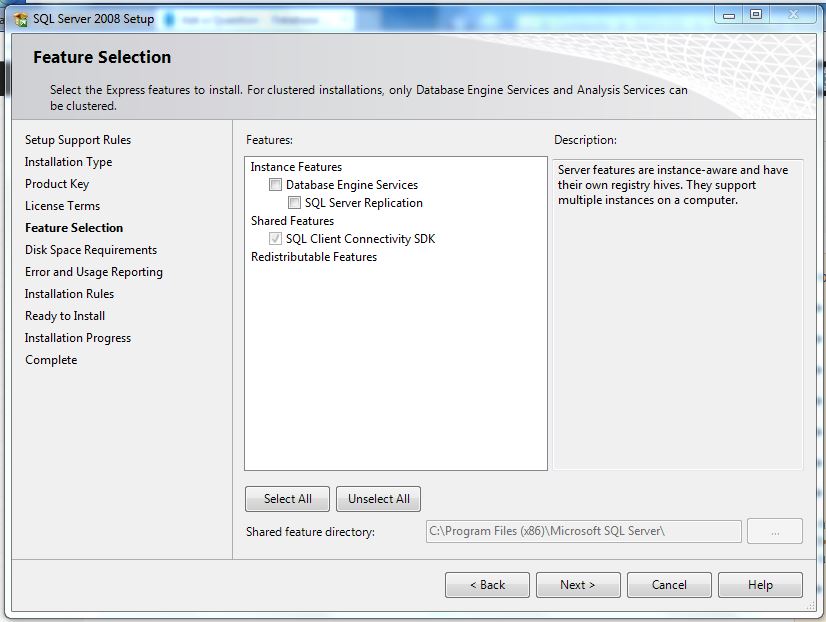 What I have done is:

What is the matter for this problem? Is there anything that I need to install before I install SQL server 2008? If there is, can I have the link?

From your screenshot I judge that you are using the Express installer (It says: Select the express features to install), SSDT and Visual Studio 2010 have no influence on the options in this installer.

Make sure you install the Microsoft SQL Server2008 R2 RTM - Express with Advanced Services as that is the only one including BIDS.

Have a look at Features Supported by the Editions of SQL Server 2008 R2 which clearly states that the regular express doesn't have BIDS and the Express with advanced services does have BIDS.

Installing BIDS has no prerequisite on Visual Studio or SSDT and SSDT has no influence whatsoever on the installer you are running.

Also, BIDS is by definition Visual Studio 2008 as explained here

If you're insisting on installing Visual Studio of a specific version you need to look into SQL Server data tools. SQL Server Data tools is not shown in the installation features but is a separate download and can not be reasonably used with SQL 2008

Not the answer you're looking for? Browse other questions tagged sql-server sql-server-2008 installation business-intelligence visual-studio-2010 or ask your own question.