What effect does serializable isolation level have on DDL-statements?

I'm using Red Gate SQL Compare to create a release script based on differences between SVN and a database. This results in a script containing a bunch of table- and procedure-changes and it works fine. However, one thing puzzles me, it's using transaction isolation level serializable.

I know what it does to dml-statements, but I'm not sure what it means for ddl. Can someone enlighten me, perhaps with an example?

I believe it will mean the same thing for DDL as it does for DML. The msdn article on the topic actually gives you a pretty clear idea under the SERIALIZABLE section:

This option has the same effect as setting HOLDLOCK on all tables in all SELECT statements in a transaction.

Basically as long as your transaction is running, no DDL can be performed on any of the objects you directly or indirectly reference.

I know what it does to dml-statements, but I'm not sure what it means for ddl.

Generally speaking, not much.

DDL encompasses a huge range of operations (many of which have their own special behaviours), but most DDL will take a schema modification (Sch-M) lock on the underlying object, either for the duration of the command, or at a critical stage (e.g. at the end of most online index builds). This is the most restrictive type of lock, preventing any sort of concurrent access, at any isolation level.

Even where Sch-M is not taken, the engine is careful to take the right locks at the appropriate times to ensure the end result is correct. For example, it is not possible to build an index that does not exactly reflect the underlying data.

All of the above applies regardless of any session isolation level specified by the user.

As far as changes to metadata (i.e. the system structures underlying views like sys.tables) are concerned, while SQL Server ensures correct changes automatically, user access is only fully supported and guaranteed to be honoured at the default locking READ COMMITTED isolation level.

Internally, the SQL Server Database Engine only honors the READ COMMITTED isolation level for metadata access. If a transaction has an isolation level that is, for example, SERIALIZABLE and within the transaction, an attempt is made to access metadata by using catalog views or metadata-emitting built-in functions, those queries will run until they are completed as READ COMMITTED. However, under snapshot isolation, access to metadata might fail because of concurrent DDL operations. This is because metadata is not versioned. Therefore, accessing the following under snapshot isolation might fail:

From the same page:

The following table provides a summary of metadata access under various isolation levels. 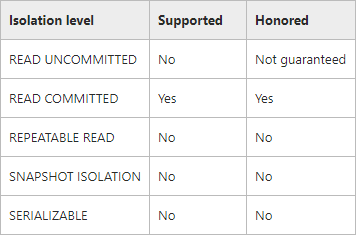 Accessing metadata at an isolation higher than read committed is not even honoured - the information will be read with READ COMMITTED isolation semantics.

If I had to guess, I would say the comparison tool in the question sets isolation to SERIALIZABLE to cover any DML in the generated script.

Not the answer you're looking for? Browse other questions tagged sql-server sql-server-2008 ddl isolation-level or ask your own question.