Why is using a table variable more than twice as fast as a #temp table in this specific case?

I was looking at the article here Temporary Tables vs. Table Variables and Their Effect on SQL Server Performance and on SQL Server 2008 was able to reproduce similar results to those shown there for 2005.

When executing the stored procedures (definitions below) with only 10 rows the table variable version out performs the temporary table version by more than two times.

I cleared the procedure cache and ran both stored procedures 10,000 times then repeated the process for another 4 runs. Results below (time in ms per batch)

My question is: What is the reason for the better performance of the table variable version?

I've done some investigation. e.g. Looking at the performance counters with

confirms that in both cases the temporary objects are being cached after the first run as expected rather than created from scratch again for every invocation.

Similarly tracing the Auto Stats, SP:Recompile, SQL:StmtRecompileevents in Profiler (screenshot below) shows that these events only occur once (on the first invocation of the #temp table stored procedure) and the other 9,999 executions do not raise any of these events. (The table variable version does not get any of these events)

The slightly greater overhead of the first run of the stored procedure can in no way account for the big overall difference however as it still only takes a few ms to clear the procedure cache and run both procedures once so I don't believe either statistics or recompiles can be the cause.

The output of SET STATISTICS IO ON for both looks similar

And as Aaron points out in the comments the plan for the table variable version is actually less efficient as whilst both have a nested loops plan driven by an index seek on dbo.NUM the #temp table version performs a seek into the index on [#T].n = [dbo].[NUM].[n] with residual predicate [#T].[n]<=[@total] whereas the table variable version performs an index seek on @V.n <= [@total] with residual predicate @V.[n]=[dbo].[NUM].[n] and so processes more rows (which is why this plan performs so poorly for larger number of rows)

Using Extended Events to look at the wait types for the specific spid gives these results for 10,000 executions of EXEC dbo.T2 10

So it is clear that the number of PAGELATCH_SH waits is much higher in the #temp table case. I'm not aware of any way of adding the wait resource to the extended events trace so to investigate this further I ran

Whilst in another connection polling sys.dm_os_waiting_tasks

Both of these pages being latched belong to (different) non clustered indexes on the tempdb.sys.sysschobjs base table named 'nc1' and 'nc2'.

Querying tempdb.sys.fn_dblog during the runs indicates that the number of log records added by the first execution of each stored procedure was somewhat variable but for subsequent executions the number added by each iteration was very consistent and predictable. Once the procedure plans are cached the number of log entries are about half those needed for the #temp version.

Looking at the transaction log entries in more detail for the #temp table version of the SP each subsequent invocation of the stored procedure creates three transactions and the table variable one only two.

The INSERT/TVQUERY transactions are identical except for the name. This contains the log records for each of the 10 rows inserted to the temporary table or table variable plus the LOP_BEGIN_XACT/ LOP_COMMIT_XACT entries.

The CREATE TABLE transaction only appears in the #Temp version and looks as follows.

The FCheckAndCleanupCachedTempTable transaction appears in both but has 6 additional entries in the #temp version. These are the 6 rows referring to sys.sysschobjs and they have exactly the same pattern as above.

Looking at these 6 rows in both transactions they correspond to the same operations. The first LOP_MODIFY_ROW, LCX_CLUSTERED is an update to the modify_date column in sys.objects. The remaining five rows are all concerned with object renaming. Because name is a key column of both affected NCIs (nc1 and nc2) this is carried out as a delete/insert for those then it goes back to the clustered index and updates that too. 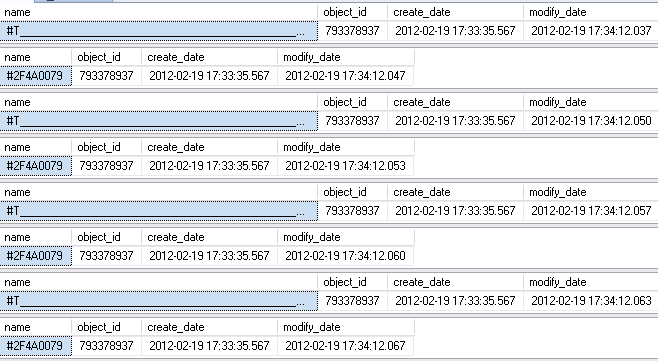 So one potential explanation for the observed performance differential as alluded to by Alex is that it is this additional work maintaining the system tables in tempdb that is responsible.

The table variable version spends about 60% of the time performing the insert statement and the subsequent select whereas the temporary table is less than half that. This is inline with the timings shown in the OP and with the conclusion above that the difference in performance is down to time spent performing ancillary work not due to time spent in the query execution itself.

Under both the create and release functions the function CMEDProxyObject::SetName is shown with an inclusive sample value of 19.6%. From which I infer that 39.2% of the time in the temporary table case is taken up with the renaming described earlier. 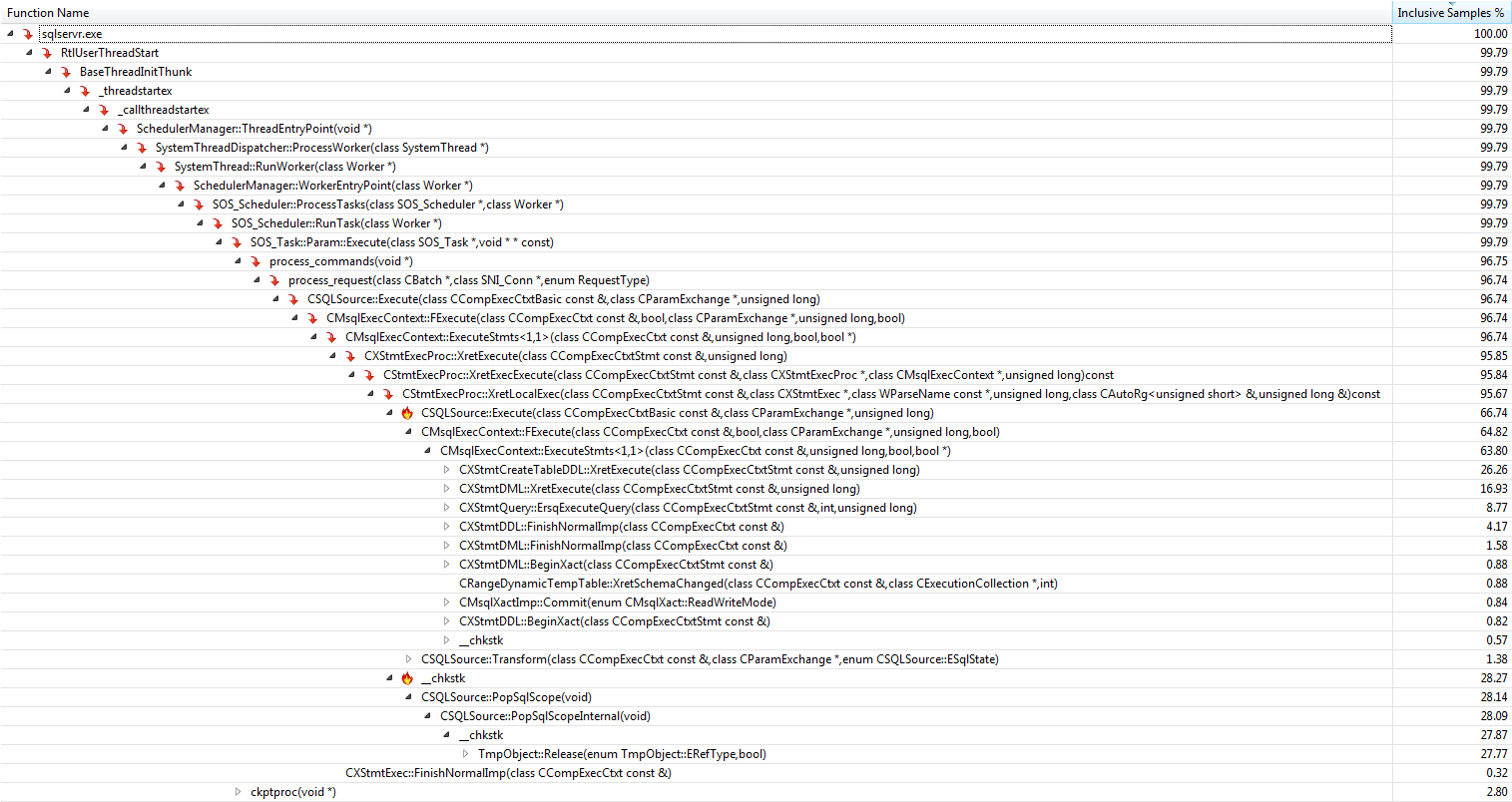 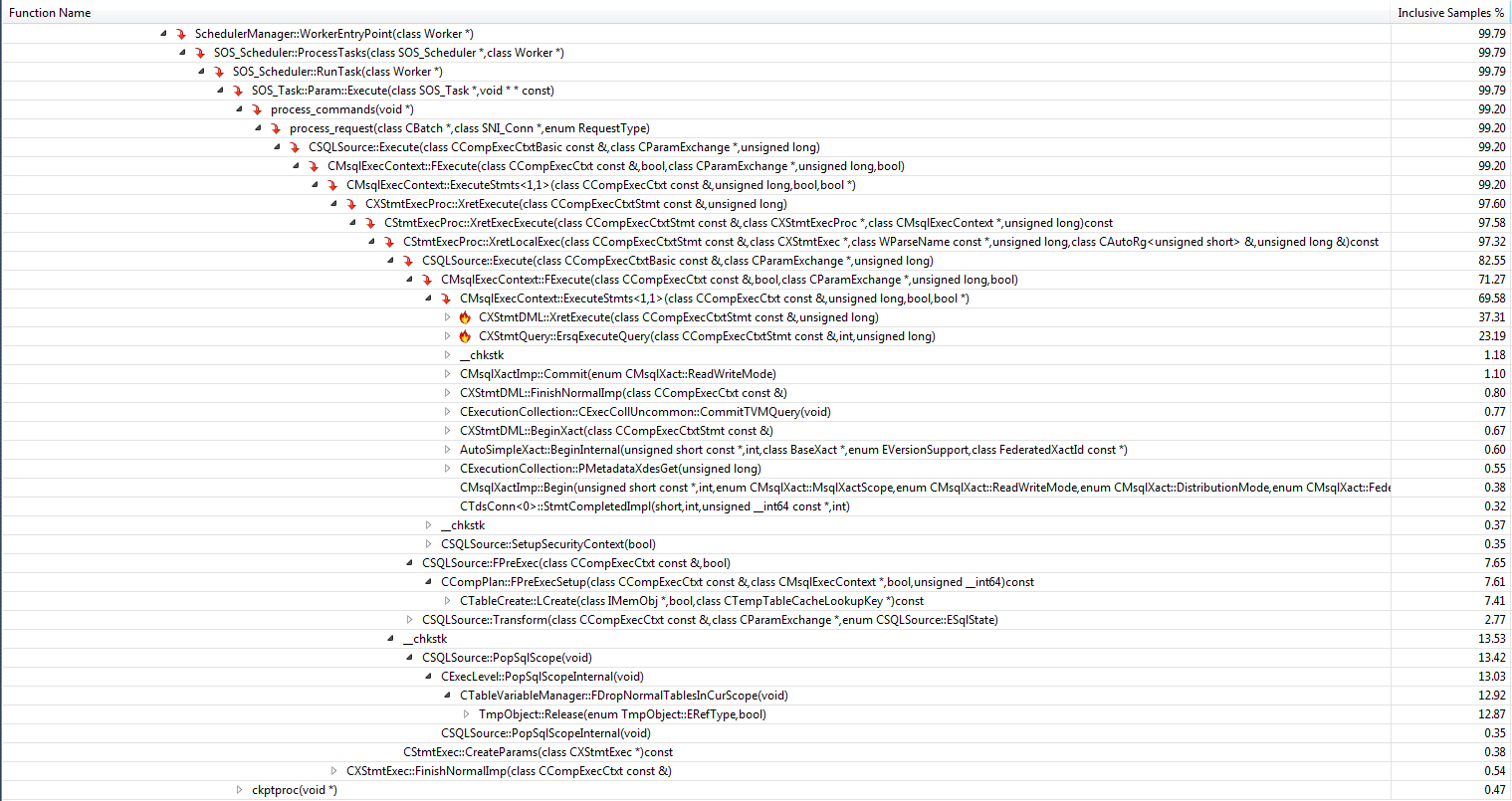 Since this is an older question, I decided to revisit the issue on newer versions of SQL Server to see if the same performance profile still exists, or if the characteristics have changed at all.

Specifically, the addition of in-memory system tables for SQL Server 2019 seems a worthwhile occasion to re-test.

I'm using a slightly different test harness, since I ran into this issue while working on something else.

Using the 2013 version of Stack Overflow, I have this index and these two procedures:

Since 2014 and 2016 are basically RELICS at this point, I'm starting my testing with 2017. Also, for brevity, I'm jumping right to profiling the code with Perfview. In real life, I looked at waits, latches, spinlocks, crazy trace flags, and other stuff.

Profiling the code is the only thing that revealed anything of interest.

Looking at the top two increases in the diffed samples, we see sqlmin and sqlsqllang!TCacheStore<CacheClockAlgorithm>::GetNextUserDataInHashBucket are the two biggest offenders. 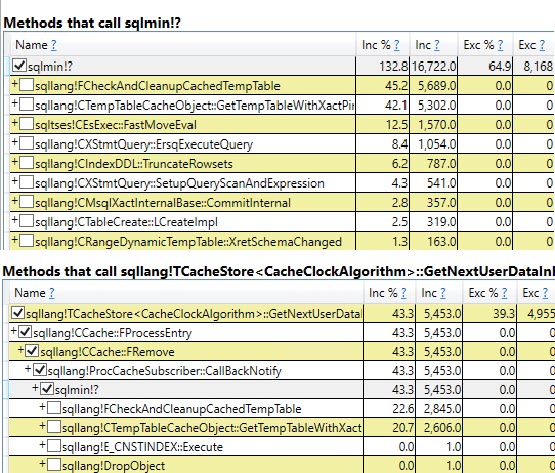 Judging by the names in the call stacks, cleaning up and internally renaming temp tables seems to be the biggest time sucks in the temp table call vs. the table variable call.

Even though table variables are internally backed by temp tables, this doesn't seem to be an issue.

Looking through the call stacks for the table variable test doesn't show either of the main offenders at all:

Alright, so this is still an issue in SQL Server 2017, is anything different in 2019 out of the box?

First, to show there's nothing up my sleeve:

Looking at the diff in Perfview, it has changed a bit -- sqlmin is no longer there -- but sqllang!TCacheStore<CacheClockAlgorithm>::GetNextUserDataInHashBucket is. 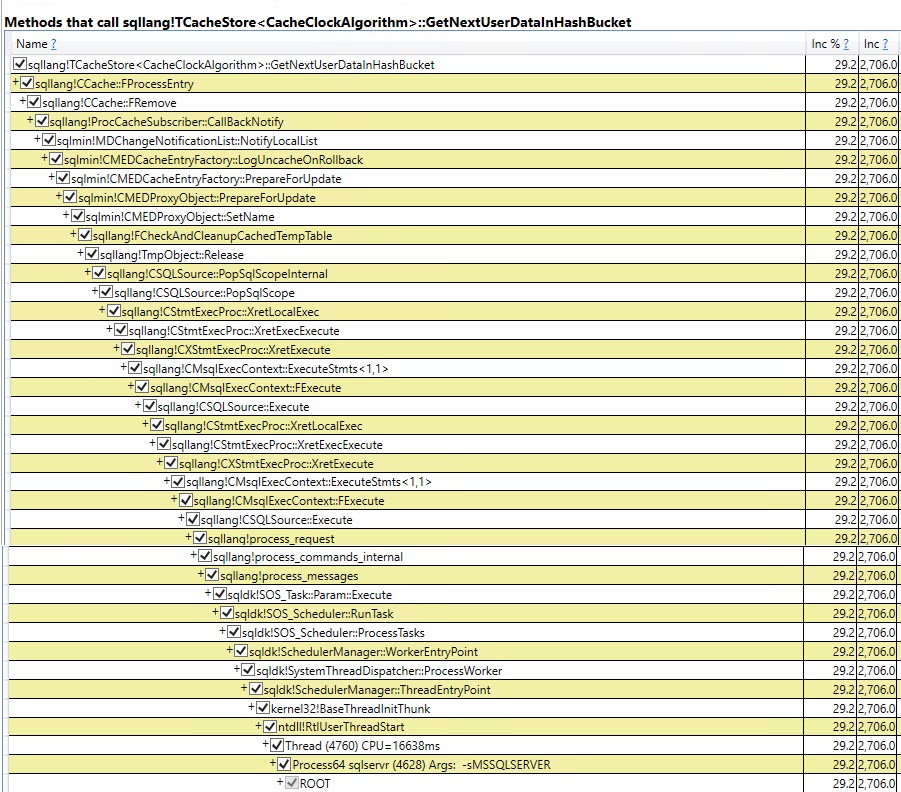 What about this new in memory system table thing? Hm? Sup with that?

Let's turn it on!

Note that this requires a SQL Server restart to kick in, so pardon me while I reboot SQL on this lovely Friday afternoon.

The temp tables did about 4 seconds better! That's something.

This time, the Perfview diff isn't very interesting. Side by side, it's interesting to note how close the times are across the board: 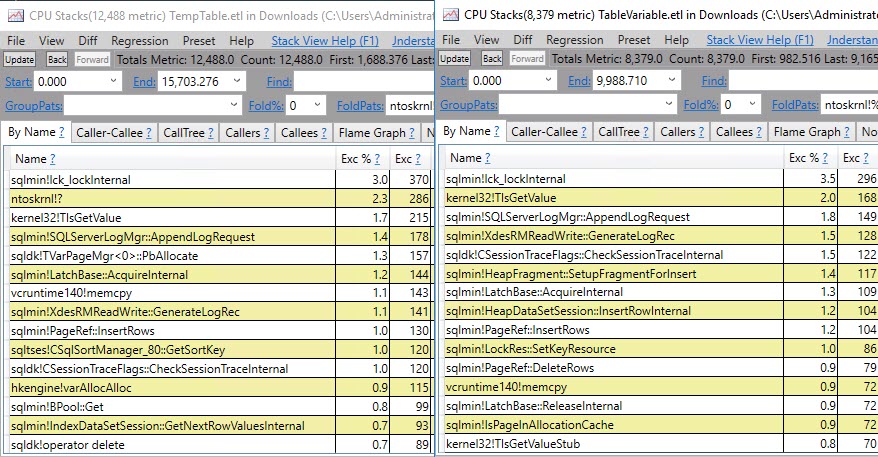 One interesting point in the diff are the calls to hkengine!, which may seem obvious since hekaton-ish features are now in use. 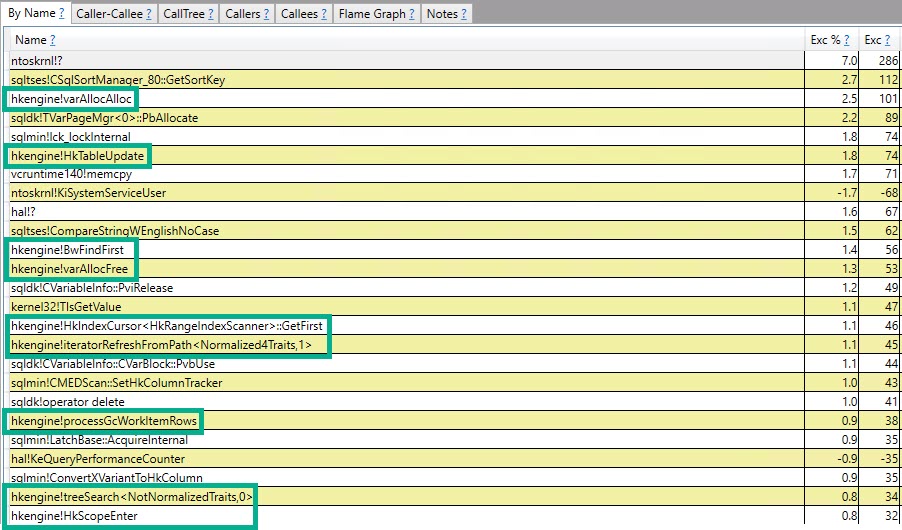 As far as the top two items in the diff, I can't make much of ntoskrnl!?:

Or sqltses!CSqlSortManager_80::GetSortKey, but they're here for Smrtr Ppl™ to look at:

Note that there is an undocumented and definitely not safe for production so please don't use it startup trace flag you can use to have additional temp table system objects (sysrowsets, sysallocunits, and sysseobjvalues) included in the in-memory feature, but it didn't make a noticeable difference in execution times in this case.

Though it's tempting to blame compilations, recompilations, auto stats, latches, spinlocks, caching, or other issues, the issue is clearly still around managing temp table cleanup.

It's a closer call in SQL Server 2019 with in-memory system tables enabled, but table variables still perform better when call frequency is high.

Of course, as a vaping sage once mused: "use table variables when plan choice isn't an issue".

Not the answer you're looking for? Browse other questions tagged sql-server temporary-tables or ask your own question.

474
What's the difference between a temp table and table variable in SQL Server?
24
Why does a simple loop result in ASYNC_NETWORK_IO waits?
9
how come a table variable is improving the performance of a query in this circumstance?
6
MSSQL table variable identification
4
Temp Table Filtered Index Creation is Blocked When Stored Procedure is Run Multiple Times Concurrently
1
Why do update statements degrade when in a transaction?