Designing a friendships database structure: Should I use a multivalued column?

Say I have a table called User_FriendList, which has the following characteristics:

And let us suppose that said table holds the following data:

Note: The “:” (colon) is the delimiter when exploding in PHP into an array.

Managing an individual piece of information

Assuming that, in your business domain,

then each specific datum gathered in the Friendlist_IDs multivalued column represents a separate piece of information that carries a very exact meaning. Therefore, said column

Consequently, you should retain each of the Friendlist_IDs values in (a) a column that accepts exclusively one sole value per row in (b) a table that represents the conceptual-level association type that can take place between Users, i.e., a Friendship —as I will exemplify in the following sections—.

Because the relational model of data, created by Dr. E. F. Codd, demands having tables that are composed of columns that hold exactly one value of the applicable domain or type per row; hence, declaring a table with a column that can contain more than one value of the domain or type in question (1) does not represent a mathematical relation and (2) would not permit obtaining the advantages proposed in the aforementioned theoretical framework.

I highly recommend starting to shape a database delimiting —before anything else— the corresponding conceptual schema by virtue of the definition of the relevant business rules that, among other factors, must describe the types of interrelationships that exist between the distinct aspects of interest, i.e., the applicable entity types and their properties; e.g.:

In this manner, I was able to derive the IDEF1X1 diagram shown in Figure 1, which integrates most of the rules previously formulated: 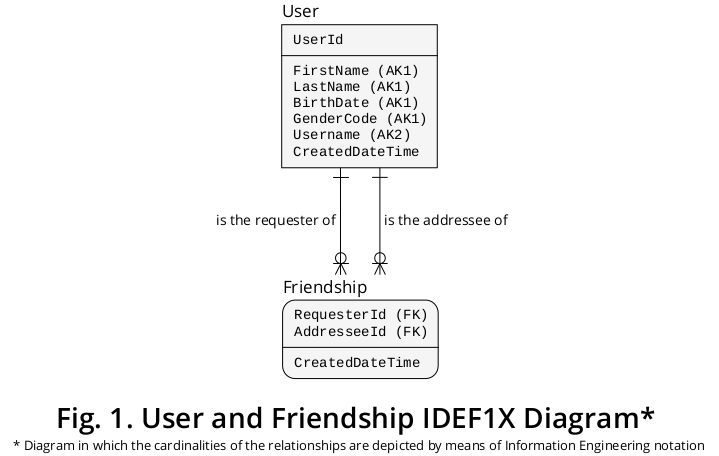 As depicted, Requester and Addressee are denotations that express the Roles carried out by the specific Users that take part in a given Friendship.

That being so, the Friendship entity type portrays an association type of many-to-many (M:N) cardinality ratio that can involve different ocurrences of the same entity type, i.e., User. As such, it is an example of the classic construct known as “Bill of Materials” or “Parts Explosion”.

1 Integration Definition for Information Modeling (IDEF1X) is a highly recommendable technique that was established as a standard in December 1993 by the U.S. National Institute of Standards and Technology (NIST). It is solidly based on (a) the early theoretical material authored by the sole originator of the relational model, i.e., Dr. E. F. Codd; on (b) the entity-relationship view of data, developed by Dr. P. P. Chen; and also on (c) the Logical Database Design Technique, created by Robert G. Brown.

Then, from the IDEF1X diagram presented above, declaring a DDL arrangement like the one that follows is much more “natural”:

Advantages of a single-valued column

As demonstrated, you can, e.g.:

So, there are multiple reasons that call for analyzing the relevant business environment carefully in order to mark out the typed of each table column with accuracy.

As expounded, the role played by the database designer is paramount to make the best use of (1) the logical-level benefits offered by the relational model and (2) the physical mechanisms provided by the DBMS of choice.

a, b, c, d Evidently, when working with SQL platforms (e.g., Firebird and PostgreSQL) that support DOMAIN creation (a distinctive relational feature), you can declare columns that only accept values that belong to their respective (fittingly constrained and sometimes shared) DOMAINs.

One or more application programs sharing the database under consideration

When you have to employ arrays in the code of the application program(s) accesing the database, you simply need to retrieve the relevant data set(s) in full and then “bind” it (them) to the concerning code structure or execute the associated app(s) process(es) that should take place.

Another advantage of holding the AddresseeId data point in its reserved and properly typed column is that it considerably facilitates extending the database structure, as I will exemplify below.

Since Friendships can evolve over time you might have to keep track of such a phenomenon, thus you would have to (i) expand the conceptual schema and (ii) declare a few more tables in the logical layout. So, let us arrange the next business rules to delineate the new incorporations:

Successively, the previous IDEF1X diagram can be extended in order to include the new entity types and interrelationship types described above. A diagram depicting the previous elements associated with the new ones is presented in Figure 2: 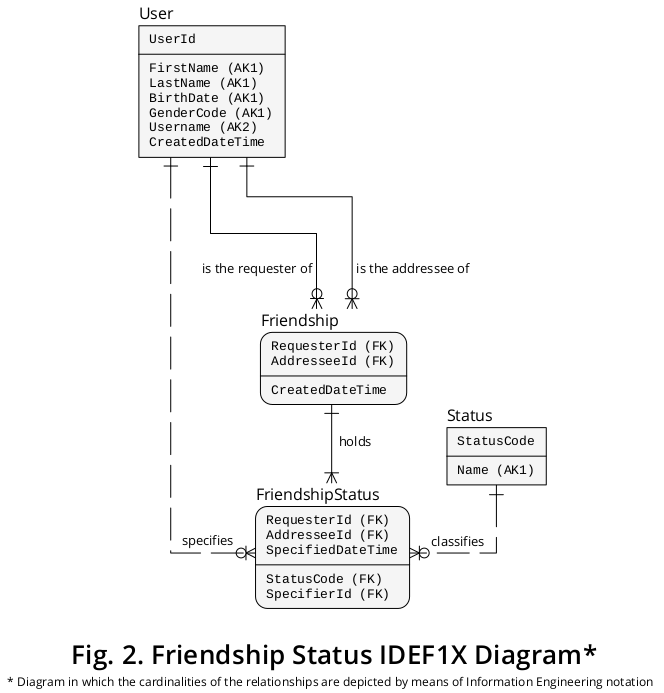 Afterwards, we can lengthen the DDL layout with the following declarations:

Consequently, every time that the Status of a given Friendship needs to be put up-to-date, the Users would only have to INSERT a new FriendshipStatus row, containing:

To that extent, let us suppose that the MyStatus table encloses the following data —with PK values that are (a) end user-, app programmer- and DBA-friendly and (b) small and fast in terms of bytes at the physical implementation level—:

As you can see, it can be said that the FriendshipStatus table serves the purpose of comprising a time series.

Not the answer you're looking for? Browse other questions tagged database-design foreign-key normalization relational-theory or ask your own question.

1
How to properly implement relationship between a user and multiple other users
35
How should I design a relationship table for friendship?
16
Designing a database for a video game business domain with multiple many-to-many relationships
9
Advice on a basic design, first time database design
4
Should I create multiple tables for different entity states, statuses or stages?
3
Creating a Friendships database that includes a Block Friend option
2
How to remove data redundancy in product table if multiple suppliers are there for same product
1
What to name a field that includes Store and Version ID
2
Assessing the normal form for a relation with a multi-valued attribute
0
One column link to others
See more linked questions