Clustered Index Scan when using greater than in WHERE clause

I have the following table

This table has ~10000 rows with col2 always being populated and col3 has varying percentages of rows that are NOT NULL.

I am running the following query

SQL is always generating a execution plan with a clustered index scan.

The value being passed in the WHERE clause results in a small number of rows being returned (e.g. 3)

When running the ad-hoc query the execution plan shows the Estimated Number of Rows as 3.32. However, when I run the parameterized query it shows 2796 estimated rows.

I'm currently running SQl 2014 CP1-CU5. I've tried using trace flag 9184 to force SQL to use the old cardinality estimator which reduces the estimated rows to 1627 but still does a clustered index scan. I've also tried on SQL 2008 R2 and it has the same behavior as SQL 2014 with trace flag 9184.

In between each iteration of the query I am clearing the procedure cache and buffer pool.

I should also noted that I have also tried the following

I've also done a full rebuild on the both the clustered and non clustered indexes and verified that stats are up to date.

Any suggestions or ideas?

UPDATE: From reading through some links from Martin's answer I found the following blog post:

I confirmed that using sp_executesql or exec(@sql) does result in an index seek execution plan being generated and reused regardless of what the parameter value(s) are.

The values of variables aren't generally sniffed so it will just assume a flat 30% of the table will be returned for that greater than predicate against an unknown value (cf. Selectivity Guesses in absence of Statistics).

When you use the literal it can look up the known value in the column statistics to get a much more accurate estimate.

If it estimates such a high percentage of the table will match it is exceedingly unlikely to give you a plan with lookups (the exact tipping point depends on how wide the table and index is).

If you use option (recompile) the variable value is able to be sniffed however...

Will likely give you the same plan as when using the literal.

You could create a stored procedure that uses dynamic SQL to allow SQL Server to decide the best plan for a given value of col3. This is similar to @Martin's answer with the OPTION (RECOMPILE), with the added benefit of execution plan caching for queries that run more than once.

The below stored procedure will create a unique plan that is cached for each value of the @Col3 parameter1:

Each plan generated here will be cached. If you have a large number of possible values for the @Col3 parameter, and each individual query is ran infrequently, you may want to enable "optimize for ad-hoc workloads".

I inserted some test data into the table using this:

The plans for these executions are different; the first uses a scan of the table, the second uses a seek/lookup, which is clearly giving us the best of both worlds for the two queries: 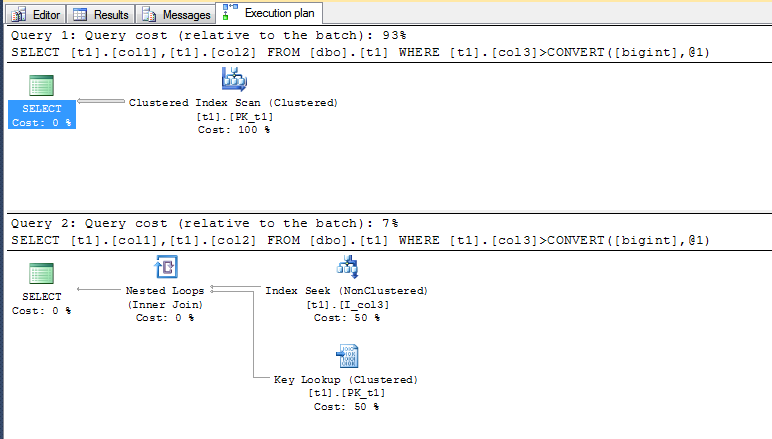 The plan shape for the third case looks very similar to the first case, a simple table scan. However, if you look closely, the expected row counts differ quite drastically. You can see this in the plan shape by looking at the thickness of the connecting line between the two plan operators:

Note rows 2 to 4 show the ad-hoc cached plans for the three executions of the stored proc. Row 1 is the stored proc itself. If we enable the optimize for ad-hoc workloads option, the ad-hoc plans will only actually be cached if the query runs 2 or more times. Purely single-use queries will only result in a stub being saved into the procedure cache.

1 - notice the stored procs use CONVERT(BIGINT, @Col3) in the where clause - this is important in dynamic SQL since the optimizer will not necessarily correctly guess the data type of the passed in value which may cause incorrect cardinality estimates due to implicit conversions in the plan.

The most effective method I've found is to give the query plan more information about the expected values of parameters.