How to select user that doesn't exist in the second table 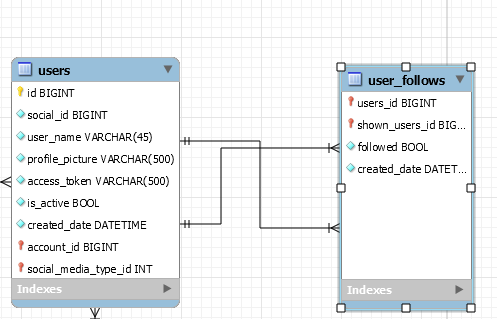 I am trying to understand how to select a user from users table that is not associated with current user in user_follows table: neither in users_id not in shown_users_id.

Basically a new user that not related to my current user.

But it would still return me the row with user 3 in it.

So if in my users table I have user 2,3,4, and with the following data in user_follows table: 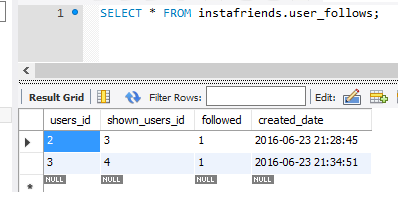 I only want to get user 4, since it is not associated with user 2 at this moment.

You need 2 anti-joins. Written with either two LEFT JOIN / IS NULL:

or with two NOT EXISTS subqueries, which I find far more readable:

3
multi-table mysql query
0
getting the total of amount of money of each user between two dates even if no record is found
1
how do I use a value from the select in a joined subquery?
0
Django Auth user as well as custom users table?
1
MySQL Table Schema Design - Relationship with Junction or User Table
6
Table doesn't exist in engine
1
SQL: Join on multiple tables
0
How do I check three conditions on a select with one query?