I've never posted one of these before so let me know if any information is missing.

I have a relatively simple query that performs pretty poorly with the default sample size on a few key columns. The costing of a clustered index scan used by a row count spool appears to be impossibly low. I will go through the technical details that I can share about the problem. Unfortunately, I cannot share statistics or provide a data set. What I am looking for is an explanation of the root cause and additional workarounds to the problem.

The query itself only has two tables.

Here is the query text:

The difference between A and B is 104173. These are both integers.

Here is a screenshot of the estimated query plan:

Here is a screenshot of the key operator: 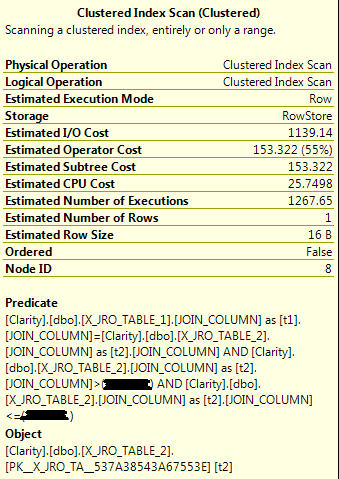 By request here is the anonymized estimated execution plan: http://pastebin.com/h47Lzs0L

Here is a screenshot of the clustered index scan operator for that query: 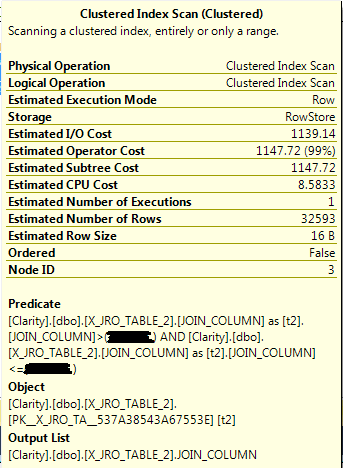 So if the SQL Server query optimizer is deciding between different plans and one of the plans has an artificially low cost for a required step then it seems unlikely that I will get a different plan, even if that plan seems absurd to me personally.

If I increase the sample size of the stats on JOIN_COLUMN for X_JRO_TABLE_1 or X_JRO_TABLE_2 then the cost of the full scan on X_JRO_TABLE_2 goes up. With a large enough sample size I believe that we hit a tipping point that makes the row count spool plan inferior to other plan choices including just a regular table spool. Here is a screenshot of the query plan after I gathered stats in full:

I tried to get a query plan with a row count spool after increasing the sample size and could not do so, even after disabling the following optimizer rules:

The following plan was the end result of that endeavor. This isn't a great query plan but it is certainly better than the row count spool one. 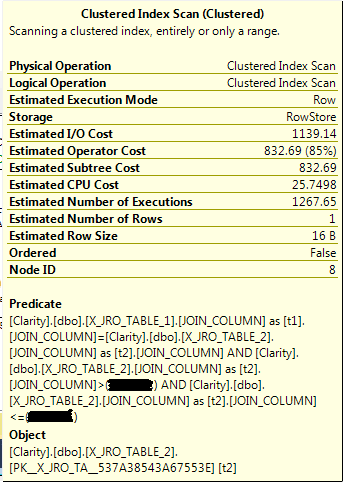 As far as I can tell the only thing that is different is the estimated subtree cost. That doesn't make sense to me.

I know of a few workarounds but I do not like them for reasons that I don't need to get into here.

If you made it to the end thank you for reading. As I said earlier, I am looking for the root cause of this behavior and am interested in any other workarounds that the community can provide.

Your first question (why is the clustered index scan costed so low) is almost certainly due to the concept of "row goals", a feature of the SQL Server optimizer that examines sections of a query tree where not all rows from that tree are needed (these sub-trees typically implement things like IN, NOT IN, EXISTS, TOP 1 subqueries, etc). SQL Server is basically asking "how many rows do I expect to scan from the X_JRO_TABLE_2 table before I find a match for X_JRO_TABLE_1 (and thus disqualify the row)".

Since SQL Server assumes an even distribution of values throughout the table, it assumes that it won't have to read very many rows/pages before finding a match. Or said another way, the optimizer thinks that most "scans" on the inner side of the loop join will be extremely short partial scans, rather than full scans or anywhere close to full. That's obviously a poor assumption given the real distribution of rows in X_JRO_TABLE_2.

Paul White has answered a very similar question here, much better than I can, discussing row goals and linking to more in-depth resources: Unexpected scans during delete operation using WHERE IN Note the Top operator above the tblFEStatsPaperHits scan on the inside of a nested loops join.

As for your second question (why the sampling increase on X_JRO_TABLE_2 increases the cost of the table scan) I'd have to play around with things to hazard a nuanced guess, though it is probably also related to the row goal/"how many rows to read before finding a match" issue.

Not the answer you're looking for? Browse other questions tagged sql-server performance sql-server-2014 query-performance or ask your own question.

40
Unexpected scans during delete operation using WHERE IN