I have a simple join like the one below:

I've updated the stats on the SK column used in the join in both the fact table (with fullscan) and the dimension table, here's the histogram for each: 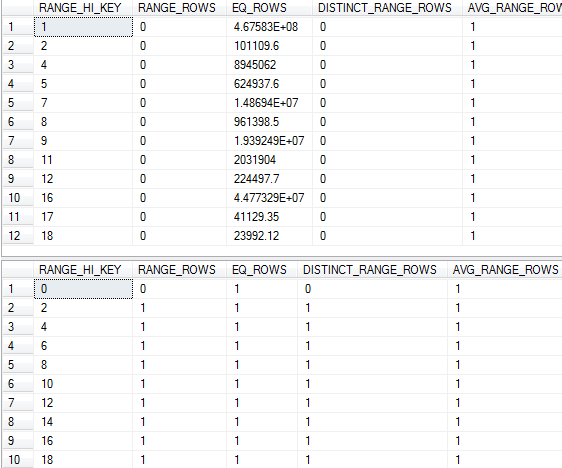 This issue only seems to occur for a couple dimension tables in the database, joining the other dimension tables doesn't produce the same type of cardinality estimate issue - any suggestions on how to possibly fix this or further investigate?

If I add a where clause to the query, it correctly estimates the number of rows before/after the join, e.g.

The issue seems to only occur when I don't have any filter in the query. It's causing a problem in a bigger query (sort spill). I've narrowed it down to this particular join.

I do have an FK constraint, but they have been turned off (WITH NOCHECK) on the fact table (we were told to turn them off so ETL can go faster). Unfortunately, turning the FK back on is not an option :(

I was able to reproduce your issue in SQL Server 2014 with the legacy CE and TF 4199 enabled. I used a rowstore fact table because I have little experience with columnstore.

For your query with the filter, the query optimizer rewrites the query to something like this:

For that query the optimizer can directly uses the histogram step containing 1 for both tables and you get 467,583,000 X 1 as the estimated number of rows.

The query without a filter will use linear interpolation:

For joins with a single equality or inequality predicate, the legacy CE joins the histograms on the join columns by aligning the two histograms step-by-step using linear interpolation.

Note that the statistics for your dimension table do not have a histogram step with a RANGE_HI_KEY value of 1, which is where almost all of the data is in your fact table. Something is going wrong with the linear interpolation step for that value. If I create your dimension table without a 0 value then the histogram gets a step with a RANGE_HI_KEY value of 1. That fixes the estimate. In short, you got unlucky with your histogram. I don't think there is a supported way to force the histogram on the dimension table to contain a step for 1, unless perhaps you are willing to add additional filters to your query.

I don't know the exact rules of your data, but I can give you two workarounds. The first workaround is to enable trace flag 2301 for the query. That fixes the estimate for this part of the query but may have other negative effects for the rest of your query. This trace flag is documented by MS, but talk to your DBA before using it.

The second workaround is to encourage the query optimizer to use a different method of cardinality estimation for the join. The following query gave a good estimate for me and only does a single scan on your fact table:

Not the answer you're looking for? Browse other questions tagged sql-server sql-server-2012 execution-plan cardinality-estimates or ask your own question.

11
How are the number of Histogram steps decided in Statistics

13
How does SQL Server's optimizer estimate the number of rows in a joined table?
5
Actual Number of rows is too high even with new tables
7
SQL Server INNER REMOTE JOIN returns more rows than INNER JOIN
20
Why is this join cardinality estimate so large?
7
Why does SQL Server estimate less rows will be emitted from a join after inserting some rows?
1
Estimated number of rows is inaccurate
2
Why does using Format vs Right to apply padding cause estimated number of rows to dramatically change?
5
Nested Loop has very low estimates due to skewed data
3
Badly-formed histogram causes bad estimates on Nested Loop
0
How to improve the estimated cardinality of inner join lateral