MySQL - Difference between using count(*) and information_schema.tables for counting rows

Which I liked because it looks like a lookup instead of a scan, so it should be fast, but I decided to test it against

to see how much of a performance difference there was.

Unfortunately I'm getting different answers as shown below: 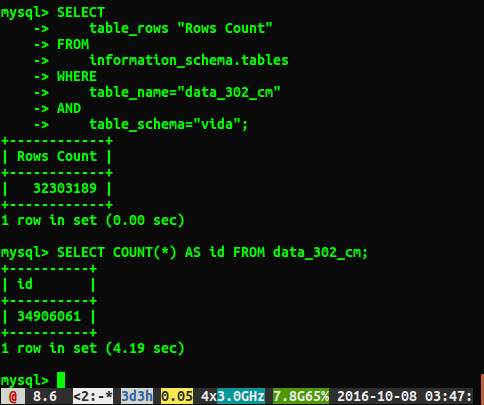 Why are the answers different by roughly 2 million rows? I am guessing the query that performs a full table scan is the more accurate number, but is there a way I can get the correct number without having to run this slow query?

I ran ANALYZE TABLE data_302, which completed in 0.05 seconds. When I ran the query again, I now get a much closer result of 34384599 rows, but it's still not the same number as select count(*) with 34906061 rows. Does analyze table return immediately and process in the background? I feel its worth mentioning this is a test database and is not currently being written to.

Nobody is going to care if it's just a case of telling someone how big a table is, but I wanted to pass the row count to a bit of code that would use that figure to create a "equally sized" asynchronous queries to query the database in parallel, similar to the method shown in Increasing slow query performance with the parallel query execution by Alexander Rubin. As it is, I will just get the highest id with SELECT id from table_name order by id DESC limit 1 and hope my tables don't get too fragmented.

There are various ways to "count" rows in a table. What is best depends on the requirements (accuracy of the count, how often is performed, whether we need count of the whole table or with variable where and group by clauses, etc.)

Not the answer you're looking for? Browse other questions tagged mysql mysql-5.6 count or ask your own question.

0
MySQL query too long to execute
1
Count approximation with where clause
0
what could make examined_rows change radically?
1
Oracle: Get the row count in a cursor when using a OPEN-FOR-USING statement
3
Index scan on UNIQUE index for count(*)
0
Can Group By and Count on MySQL be optimized?
0
Getting number of records in mysql inconsistency
1
slow mysql query need help