Should developers be allowed to use LocalDB vs a "development" instance?

Much like the vein of the question that was posted here previously around "Should developers be able to query production databases?" I wanted to get your thoughts on another particularly annoying topic!

Many companies prevent developers from install SQL Server Express and the like on development machines, instead promoting the use of centralised development SQL Servers.

Specifically this is done to ensure:

To me all these arguments are particularly invalid, with perhaps the exception of the patching ones; but if a database on a local machine is purely used for development activities, and not testing, then the patching would be proven out when an application progressed through Test / UAT etc to Production.

Collation does not appear to be a valid reason, as if this was a concern for the database it should be set when it's created anyway. Only SharePoint and SCCM have issues around this as far as I know ;)

Now, assuming it's ONLY for development, and the database will not be "moved" to production and the only movements would be:

Can anyone see any issues? Am I missing something?

Yes. All developers should have a local instance of SQL Server AND a shared SQL server instance. They exist for different purposes. Both are needed. 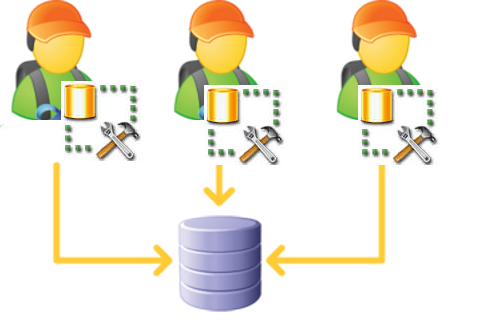 Above, several developers are authoring changes and deploying them into a communal SQL Developer database. This is bad. Microsoft MVP Troy Hunt documents some of the pain-points of this antiquated approach, here. The primary ones are ...

This pattern causes developer conflict. One symptom of the conflict is database sprawl. Many database are created as developers hunt for a safe, isolated space to do their work. There are several reasons organization cling to this pattern. The first is that they haven't invested in a proper source control system. Another is that they've simply inherited this design pattern and can't be bothered to change it. Microsoft has been steadily marching away from this pattern and into something more like this ... 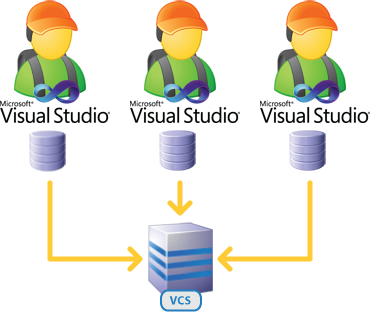 In the diagram above, each developer uses Visual Studio to write and save his database changes into a local instance of SQL Server. Those local changes are then synced into an appropriate source control system. Here each developer can design and experiment in an environment where his changes won't impact anyone else until checked-in. And at that time conflicts will be resolved.

The local database used above could be LocalDB, Express, or Developer editions. Simple-Talk does a great job weighing the pros and cons of each here. There is a reason Microsoft has authored so many choices for local development databases: LocalDB, Express, Developer.. we should be using them!

If you need to choose, it's hard not to argue that every developer have a local version SQL Server Developer edition installed. It's completely free and has feature-parity with Enterprise edition. It is going to allow your entire team explore and design within the entire Microsoft BI stack (SQL Server, SSIS, SSRS, and SSAS) in a safe way.

We can still keep the communal database, but it should not be for development, it should be for testing. It's a server where system-level settings are in sync with production. Hardware, OS, patches, etc..

To me all these arguments are particularly invalid

Patching can fix stability and data corruption issues which would otherwise plague developers. It should be done on development machines regardless.

Data security; only data on the development servers gets used for development

It's useful to separate "what should be" from "what is". Developers end up with sensitive (not necessarily PII, but not free either) data on their databases. It happens.

Recoverability; data is recoverable and still backed up

Collation differences that can cause problems when moved to production

Only SharePoint and SCCM have issues around this

Anything which uses a temp table will have this issue. It's extremely common. You never notice it because most people go for a standard collation in the first place.

assuming it's ONLY for development, and the database will not be "moved" to production

Why would we assume that? Things often go from development to production. How else do you get production populated for the very first time? Pure scripts? Not necessarily when the application has been in pre-production for some time.

You simply need to issue a statement about what you do and don't support and why.

LocalDB is a core part of SSDT now and unavoidable. However it's not remotely accessible and doesn't have a scheduling component (Express has similar issues). Hence it's not generally supported by DBAs in regards to backups, maintenance, and integrity checks.

But consolidating to centralised development servers still makes sense. And now that Developer Edition is free, it's even easier to justify having more of them.

Conceptually speaking, you are on the right track. For an organization that has a mature development process / Software Development Life Cycle (SDLC) that includes source code control, continuous integration (CI), automated testing, and an IT group that knows how to manage various environments and workstations to keep them in synch regarding software and patch-levels, and disciplined developers that a) follow the process, b) work together, and c) work with IT, then having 50 (or however many) development DBs can work:

BUT, as with most everything else, it really comes down to the context of the situation.

One benefit of having separate development DBs is that various projects can be worked on simultaneously without impacting each other. (Of course, this might be the only benefit.)

HOWEVER, there are various issues to consider:

What it really comes down to is: what is the compelling reason for using it in a team environment? Across various jobs, I have always worked in groups where there were App Devs and Database Engineers, and while the App Devs sometimes mocked up a stored procedure just to get it done faster (not enough of us DBEs), the DBEs did most of the DB programming, including checking (i.e. fixing) any code that the App Devs wrote. Using LocalDB would have made it much more difficult to work in a group. And while using SQL Server Express (or even Developer Edition) to have personal instances on each dev workstation that was accessible remotely -- making it easier to collaborate -- there was never really any need to have that level of isolation since it was rare to have DB changes for one project negatively impact another.

Of course, those of us who were Database Engineers (DBEs) did have local installs of Express Edition and/or Developer Edition. But, that was to do testing that required more control over instance-level configuration / security, etc than could be allowed for on a shared server. And I used the local instance(s) occasionally, but not terribly often. But for my personal projects, I love LocalDB and use it quite frequently.

Not the answer you're looking for? Browse other questions tagged sql-server security best-practices process sql-server-localdb or ask your own question.

169
Should developers be able to query production databases?

14
How to setup local database development process for small web team?
2
What are the advantages of having a centralised SQL database server for development?
7
What is the migration/deployment path from a LocalDB solution to Enterprise instance?
7
Error 18456 error severity 14 state 5 SQL Server 2012 SCCM2012 SP1
0
Methods for automating SQL CU patching?
2
ETL, Production, Development -- Should these be different servers? Instances?
1
Handle development issues when dealing with different collation for the instance/database setting