I'm trying to insert the result set from:

into a temp table, because I want to check the settings for all databases on my server. So I wrote this code:

But then there will only be one row per database, not the four rows that I expect from running a plain select in each database.

I know there are better ways to code this than using sp_MSForEachDB, and I tried several. But I still only get one row per database. I've tried this on both SQL Server 2016 RTM and SP1

Is this a bug with SQL Server 2016, or am I doing something wrong?

Yes. Definitely this is not correct behaviour. I have reported it here and is fixed in SQL Server 2016 SP2 CU9.

As Mikael Eriksson says in the comments sys.database_scoped_configurations and sys.dm_exec_sessions are implemented as views in the format

However comparing the two plans below there is an obvious difference.

Trace flag 8619 output for both of these queries shows

SQL Server is apparently not able to ascertain that the source for the TVF isn't also the insert target so it requires Halloween protection.

In the sessions case this was implemented as a spool that captures all rows first. In the database_scoped_configurations by adding a TOP 1 to the plan. The use of TOP for Halloween protection is discussed in this article. The article also mentions an undocumented trace flag to force a spool rather than TOP that works as expected.

Compare this with the initial memo for query 2 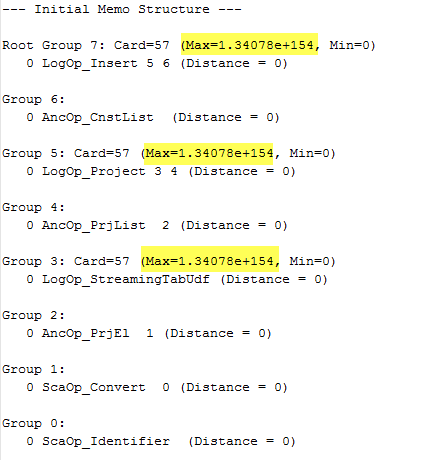 If I understand the above correctly it thinks that the first TVF can return a maximum of one row and so applies an incorrect optimisation. The Max for the second query is set to 1.34078E+154 (2^512).

I've no idea where this maximum rowcount is derived from. Perhaps metadata supplied by the author of the DMV? It's also odd that the TOP(50) workaround doesn't get rewritten to TOP(1) because TOP(50) wouldn't prevent the Halloween issue from occurring (though would stop it continuing indefinitely)

Please stop using sp_MSForEachDB. It's unsupported, undocumented, and it's buggy - which may be the problem here. My replacement demonstrates the same problem here, but in general it's a safer thing to use.

For things like this I prefer to generate dynamic SQL than hand off a single command to a procedure to execute multiple times (even my procedure, which I trust a lot more), this way I can simply print the commands instead of executing them, and make sure they're all going to do what they say.

Borrowing from the observation that the code underlying the system view implements a TOP (1), we can try this way:

Notice that I don't use USE here, but rather prefix the sys catalog view with the database name.

Why the view works in magical ways, I don't know; I don't know that you'll get a good answer here, since it likely requires comments from Microsoft (or anyone with access to source code, or willing to fire up a debugger).

Thank you for reporting this issue!

This is indeed a bug in the way the Query Optimizer generates a plan for the sys.database_scoped_configurations catalog view. We will address this on one of the next updates of SQL Server 2016 and in Azure SQL Database.

As a workaround, you can add a TOP clause on the SELECT part of your insert to get the correct plan, e.g.:

I agree that this is very strange and a potential bug, but adding a TOP(50), for example, to your select actually does return all of the rows, so that would at least get you going. The result seems to be coming from a system Table Value Function ([DB_SCOPED_CONFIG]), so I can't really tell what's going on.

I'll be keeping any eye on this thread to see if 'smarter' people know WHY this is happening.

Not the answer you're looking for? Browse other questions tagged sql-server configuration sql-server-2016 or ask your own question.